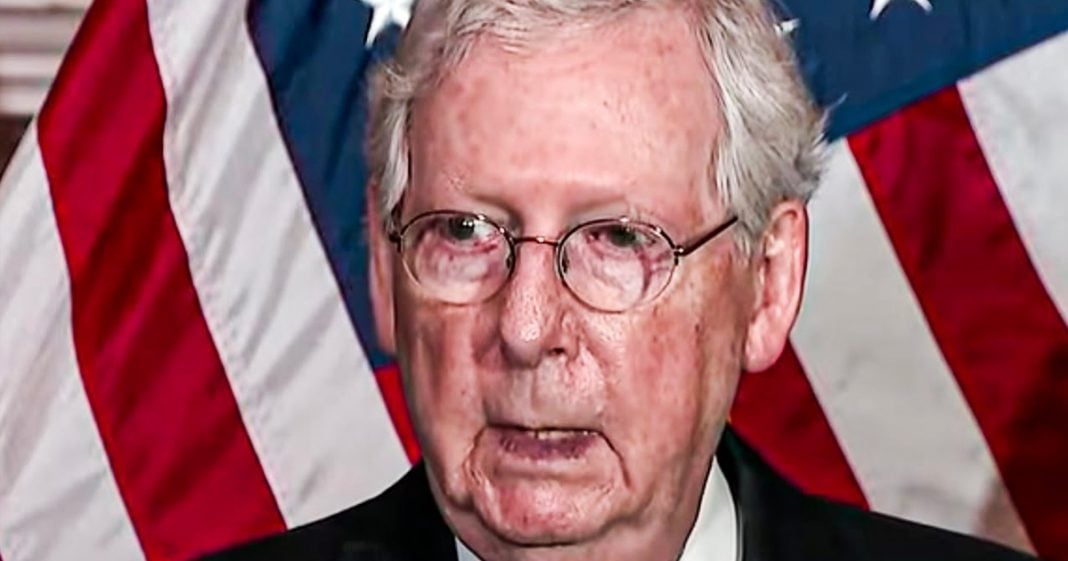 More than 100 scholars have signed onto a letter warning that democracy is under attack in the United States and Republicans are the ones doing the attacking. We are truly at a crossroads in this country with regard to the Republican attacks on our country, and we have to decided whether we are going to put an end to this for good, or if we’re going to continue letting them destroy everything until the country doesn’t even exist anymore. Ring of Fire’s Farron Cousins explains what’s happening.

This week more than 100 scholars signed onto an urgent letter saying that the Republican party here in the United States is actively undermining and essentially destroying our democracy. And what they’re saying is not just about the insurrection, it is not about even the big lie to an extent. What they’re saying is that these repressive voting laws that Republicans are pushing across the country are reminiscent of what these scholars, who are scholars on democracy, it’s reminiscent of what they’ve seen in other countries that have slipped away from actually having free and fair elections to essentially becoming a banana Republic. In fact, here’s what it is. This is a direct quote. The playbook that the Republican party is executing at the state and national levels is very much consistent with actions taken by illiberal, antidemocratic, antipluralist parties and other democracies that have slipped away from free and fair elections.

Collectively these initiatives are transforming several states into political systems that no longer meet the minimum conditions for free and fair elections. Hints our entire democracy is now at risk. Now this is what a lot of us have been saying for months though, too. So it is nice to see that the people that are much smarter than us, the people that study this for a living that are experts in it, they agree. And as I’ve repeatedly been saying recently, I don’t know how you fix this because they do talk about, you know, Congress has to pass the for the people act. We gotta protect our elections and yes, that’s an important piece of it, but is it even enough at this point? Can the for the people act undo all of the damage that Republicans have done for the past couple of decades? Can that stop voter purges? Can it prevent the gerrymandering that is keeping Republicans in power?

No, no, it can’t. So that’s a sad reality that we all have to wake up to pretty quick here. The damage has been done and the damage didn’t begin in January of 2020 folks. The damage began decades ago. When Republicans saw that the American public was moving away from their policies, didn’t really represent anyone anymore, the Republican party, the demographics were shifting. The demands of the public were shifting. The public was becoming more liberal as it became younger, as the new generations came up and started voting. And so Republicans said, well, this is all we can do. Well, we could evolve as a party, but we’re not going to do that. So this is what we have to do. We have to rig the game. We have to rig the system. We have to make sure that we can’t lose even if people despise us. And that’s what this is.

This isn’t just a five month assault on our democracy. This is a 30 year assault on our democracy. And one piece of legislation is not going to undo it. One piece of legislation is effectively a bandaid, a bandaid that allows us to maybe stop the bleeding for a little bit, but we have to dismantle this. We have to take control of it at the state level or else it’s all for not. Republicans are going to come up with work arounds to the for the people act, eventually. And yes, don’t get me wrong. I am still saying that we have to pass that legislation. It is vital. But all it’s going to do is forestall the inevitable. Republicans are still hell bent on destroying democracy in this country. And one piece of legislation isn’t going to stand in their way.