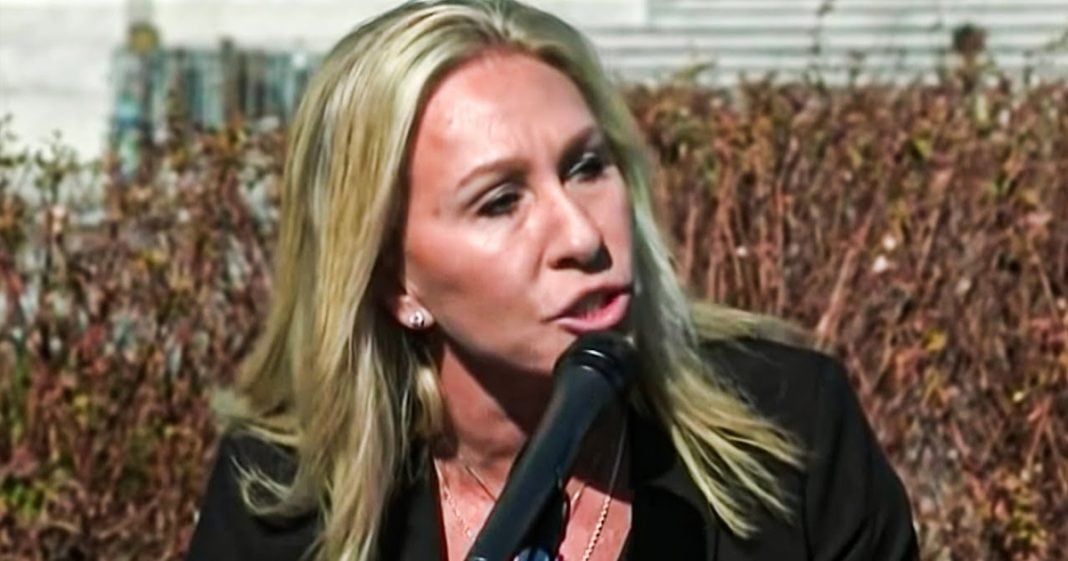 Democrats are planning to make Republican Representative Marjorie Taylor Greene the focal point of the 2022 midterms, and Republicans are not happy about this at all. For a lawmaker that has only been in the public eye for about 6 months, Greene has become a flashpoint for controversy and derision, even from her own Party. Painting her as the face of the GOP could easily convince enough voters to abandon the party for at least one election cycle. Ring of Fire’s Farron Cousins discusses this.

Democrats right now are working on a two pronged strategy for the 2022 midterms. And the first prong of that strategy is let’s talk about all the good things that Joe Biden has done. And I know it’s early in the administration. I know there’s a lot of things on his agenda that have not happened yet. So little early to talk about all the accomplishments, but there have been accomplishments. There’s also been some horrors. So focus on the accomplishments. Talk about legislation and what you want to do in the future and the numbers that you need in order to be able to do these things in the future. That is a great approach. The second part of the approach is one absolutely love even more than the first, and that is Democrats want to make Marjorie Taylor Greene the focal point of the midterm elections. They want to paint the entire Republican party as nothing more than a bunch of little Marjorie Taylor Greene’s going out there with all of their insanity.

And that’s a brilliant strategy. You know why? Because that is the same thing Republicans do and it works pretty well for them, especially down here in the south. You know, I can only speak of course, to the political ads that I see down here on TV, every election cycle. But let me tell you, you would think that every Republican politician in this area, including lower Alabama, was running against either Nancy Pelosi or AOC because they both feature prominently in every ad that these idiot Republicans put out down here. It’s all about Pelosi and AOC and socialism and it’s like, okay, but you’re running against like, you know, Don Johnson from local Mobile, Alabama. This dude isn’t even connected to any of them. But you got to have the villain. You gotta have the foil. You have to have the manifestation of everything that your party is against, to run against.

That’s been the Republican strategy down here in the South for decades, and it has paid off hugely for these Republicans. And Democrats are finally wising up and saying, you know what, we’re going to use your own strategy against you. You want to run every race against AOC. We’re going to run every race against Marjorie Taylor Greene. And let’s see who comes out on top of that fight. Let’s show the clips of her screaming through a mailbox at AOC. Let’s show her ridiculous comments that she puts on Twitter and then has to delete after it causes a big stink. Show clips of her in interviews, comparing wearing a mask to The Holocaust, see how that plays out across America. Again, I think this is a brilliant approach. And to be honest, according to reports, Republicans aren’t happy that Democrats want to do this because they’re already suffering from major Marjorie Taylor Greene problems.

And one of the biggest problems, according to a Republican strategist who spoke to the Hill, is that Marjorie Taylor Greene is kind of preventing the Republican party from being able to mount a real defense or attack, I guess I should say, against president Joe Biden. Because they’re having to spend so much time trying to clean up her messes and keep her quiet, they can’t come up with a coherent message to attack Biden. You know, we’ve seen it and I’ve talked about that plenty of times. We’ve seen it on Fox news. They can’t come up with anything that sticks. So that’s why you have the stupid talk saying, uh, Joe Biden’s responsible for Chick-fil-A sauces being low. Like they literally said that. So, yeah. And now we know part of the reason is because they’re having to go around and clean up Marjorie Taylor Greene’s messes every couple of days. I don’t think she’s going to suddenly become sane between now and the midterms. So the Democrats need to get on it, start running ads, remind the country of who this woman is, and then remind them that the entire Republican party is the same as her.