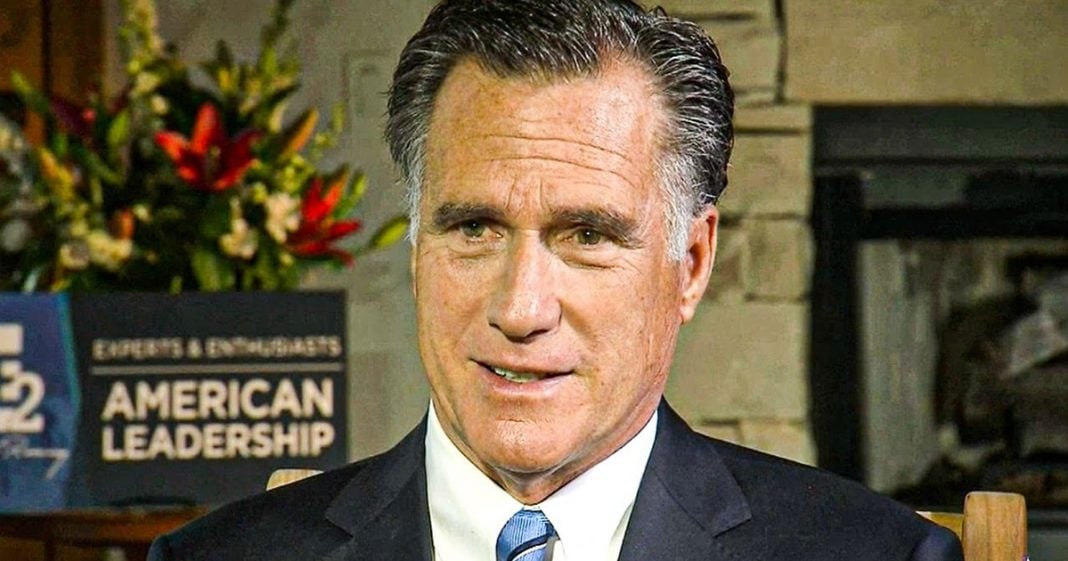 In a recent interview with The Hill, Republican Senator Mitt Romney admitted that there is virtually nothing that would shake the Republican base’s love and support of Donald Trump, even if criminal charges come for the former president. In other words, the Republican Party cannot be saved. Romney is correct, and the fact that the base of the Republican Party continues to grow crazier over Trump is proof of that. Ring of Fire’s Farron Cousins explains what’s happening.

Recently reporters for the Hill caught up with Republican Senator Mitt Romney, asked him about the ongoing and intensifying investigations into Donald Trump and his organization and his kids in the state of New York. You know, and kind of wanted to know what, what are your thoughts on this? What does this do for Donald Trump’s future? What does it do for the Republican party? And here’s what Mitt Romney had to say. I wouldn’t want to speculate on what his legal future might be, and as to what impact that would have on politics, you’d have to talk to some pundits. He seems to have a pretty good hold on the base of our party. I think that’s unlikely to be swayed by almost anything. So what Mitt Romney is saying here is that even if criminal charges come out against Donald Trump, the Republican base won’t care. Even if the man is arrested, hauled away and handcuffed, convicted even, they probably won’t care. Even If we uncover crimes far more serious than financial crimes, they won’t care.

The best thing that could happen for the United States is for both the Republican party and the Democratic party to split apart into multiple different new parties. Because that way you don’t have to try to shoe horn yourself into one or the other. We have two major, one size fits all parties, and that doesn’t work because if you’re not with this one or this one, you’re with a member of a third party that gets shut out of everything because that’s the way the system is designed. More parties means more inclusion, means better representation. And that’s what we need to build towards. This isn’t just about, ah, screw the Democrats, screw the Republicans. No, it’s about creating a system that actually works for American citizens. The needs of me here in the state of Florida, vary wildly from the needs of somebody in New York city. They vary from the needs of somebody in Alabama or Wyoming or Texas, or California or Oregon.

But I have to fit squarely into one of these columns. Am I a Democrat? Or am I Republican? Same thing with those people in those other states. We’re all forced to be the same thing even though we all need different things and we never get those things that we actually need because we’re shoe horned into one or the other. And you end up with one party control that bounces back and forth from party to party and nothing ever changes. So I agree with Mitt Romney that the Republican party cannot be saved and it should not be saved. But I also believe that both major parties need to be broken up for the good of this country.