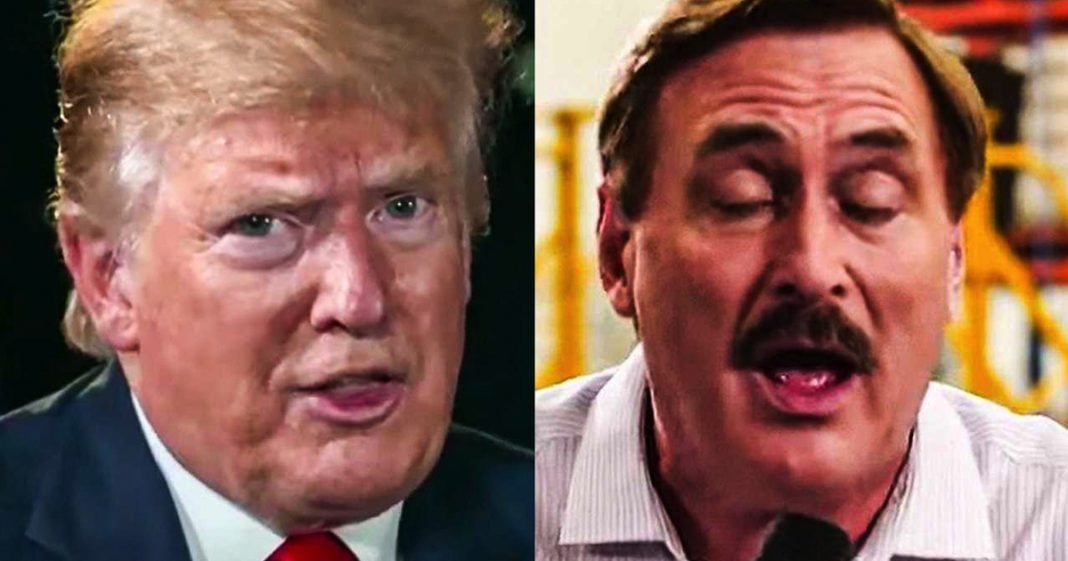 Donald Trump appears to be suffering under the delusion that he will be reinstated as President in August, and My Pillow CEO Mike Lindell says that Trump got that idea from him. In spite of the fact Lindell has absolutely no facts to back up his claim – nor are their any Constitutional mechanisms that would even allow for such a thing – Lindell remains confident that Trump will be back by August. Ring of Fire’s Farron Cousins explains what’s happening.

As it was reported this week, Donald Trump is allegedly saying behind the scenes that he expects to be reinstated somehow as president of the United States by August. Now we know that this August deadline is something that the Q folks have been pushing for awhile with no real reason. But there is one person who stepped forward to admit that if Trump is saying it’s going to happen by August, it obviously is because he was listening this guy and that guy happens to be My Pillow CEO, Mike Lindell. Lindell told the Daily Beast this week that if Trump is saying August, he probably got it because I said it. In fact, here’s his exact quote. If Trump is saying August, that is probably because he heard me say it publicly. So why August? Does Lindell have any information, anything to help shed light on why August of all months was picked?

Well, here’s what Lindell had to say. The month of August for this is subjective. It is my hope that Donald Trump is reinstated after all the proof comes out by the end of August. But I don’t know if it’ll be that month specifically. I started saying August about four weeks ago. That was my estimation. I spoke about it with my lawyers who said that they would, should have something ready for us to bring before the US Supreme Court by July. Okay. So that’s what it is. And by the way, if your lawyers are telling you that we’re drafting something to take immediately to the Supreme Court, then they clearly didn’t go to law school because that’s not how it happens. You can’t just immediately walk into the Supreme Court and say, all right, here’s my lawsuit. Let’s do this. That’s not at all how it happens, actually. Not, not at all. So, so again, if you have people who claim they went to law school telling you that they’re going to do that, um, fire them, fire them immediately, and don’t think twice about it.

Now here’s the thing. If Trump does in fact suffer from his own delusion, that he’s going to be reinstated in August, then that’s clearly a very serious problem with the former president’s brain. But Maggie Haberman writing for the New York Times seems to think there could be another reason Trump is pushing this crazy conspiracy theory, for which by the way, there actually is no constitutional mechanism to straight up reinstate a former president. That doesn’t exist. There’s literally nothing in this country that would allow for that in any law, in any book, in any part of the United States history. So Haberman thinks this could be a diversion tactic by Donald Trump to convince his followers that, hey, I’m coming back. And then of course, if indictments come from New York, he can say, oh, they only did it because I was, I was about to come back. And now, now I can’t, because, oh no, this, this happened.

Aw, shuck a roonies. Feel free to use shuck a roonies in your daily lingo if you choose. Uh, anyway, this entire conspiracy is crazy. Mike Lindell clearly has a couple of screws loose, especially if he’s admitting that, yeah, I just kind of made up August. I have no idea what I’m doing. I’m just a simple pillow salesman. But hey, everybody believes me. So I guess I’m going to keep going with it. These people are not people that anybody should be listening to. And we certainly shouldn’t have a former president getting advice on when he’s going to retake office from a has-been pillow salesman.