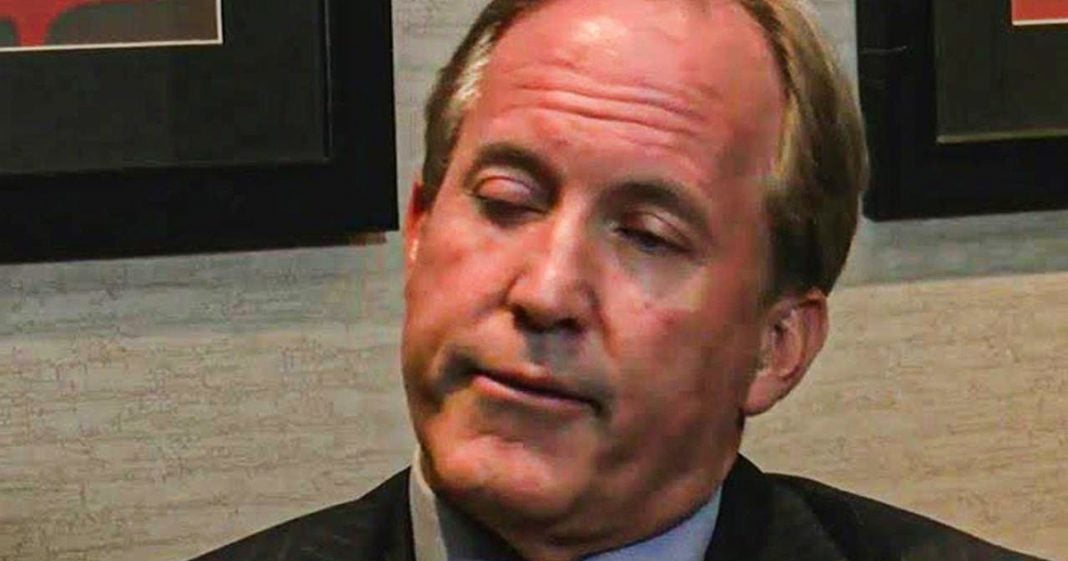 A report from The Houston Chronicle this week shows that indicted Texas Attorney General Ken Paxton, a Republican, has spent no less than 22,000 hours looking for voter fraud in the state of Texas and has so far not come up with a single instance of fraud. Paxton was indicted for securities fraud several years ago, but delays in his trial have allowed him to remain on the job, even as he faces new investigations for bribery. Ring of Fire’s Farron Cousins discusses the new report and rehashes the ongoing problems with Paxton.

Indicted Republican Texas attorney general, Ken Paxton, according to a report from the Houston Chronicle this week has had his office spend 22,000 man hours in the last year looking for instances of voter fraud in the state of Texas. And so far out of those 22,000 hours, nothing, not one single credible lead on voter fraud in the state of Texas. In spite of this massive, massive investigation from the Texas attorney general, who again was indicted several years ago for securities fraud, still awaiting trial. Luckily, you know, they keep pushing it back because Republicans control the state of Texas. But this guy who was indicted, shouldn’t even be holding office, is wasting taxpayer resources because yes, the taxpayers have to pay for this. Spent 22,000 hours trying to find even just one fraudulent ballot in the state of Texas and couldn’t frigging do it because it doesn’t exist.

Nevertheless, Texas Republicans are still moving forward with their hugely repressive voting legislation. And even though Democrats managed to temporarily kill it this past weekend, it’s going to come back. Governor Greg Abbott has said, he’s going to call a special session to make it come back and it’s eventually going to pass. But the voters in the state of Texas need to understand what the hell is happening in their state. You have an attorney general who’s likely going to jail and if he doesn’t go to jail for the securities fraud, he’s gonna possibly go to jail for the other investigations that are currently taking place with Ken Paxton, you know, bribery, exchanging favors for, you know, campaign dollars and all those kinds of things.

Yeah. That’s the other investigation, we’ve spoken at length about it here on Ring of Fire and, yeah, the guy’s an all around scumbag. And he’s sitting in office today still, instead of behind bars, wasting your money Texas folk, Republicans and Democrats alike, wasting your money on a witch hunt when he knows there ain’t no witches in Texas. Looking for voter fraud when he knows it doesn’t exist just to justify the big lie being spread by Republicans across the country and that is that somehow our elections are just totally crazy and nobody can trust anything. But investigation after investigation is proving otherwise. So how many more thousands of hours do you want Ken Paxton to waste before you wake up and realize that voter fraud is a Republican myth that they use to explain why voters continue to reject them?