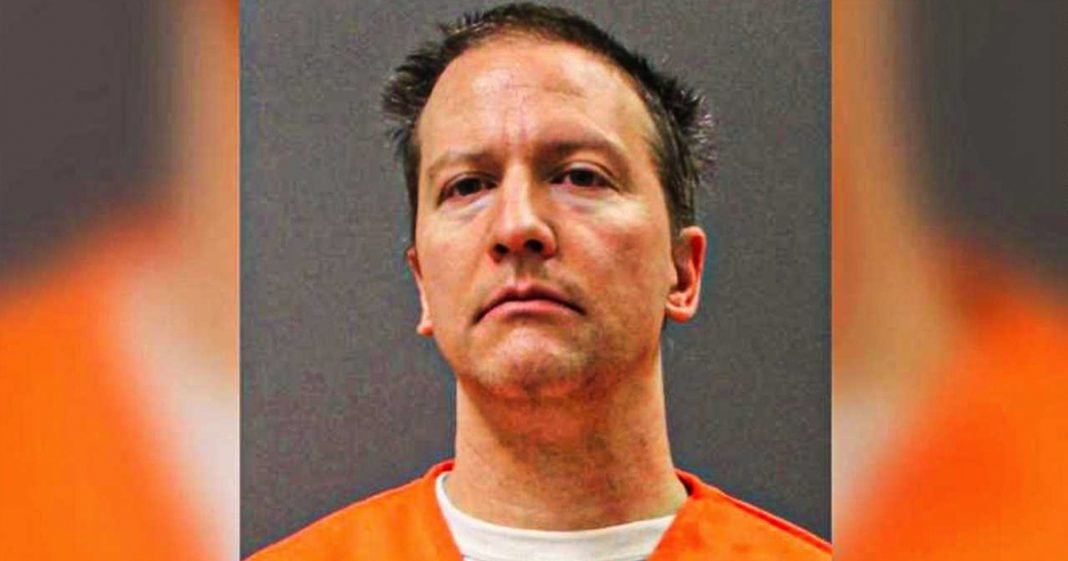 Convicted murderer Derek Chauvin is asking the courts to give him probation and time served instead of sending him to prison because, as Chauvin’s team put it, “the system is broken.” The system is indeed broken, but not because Chauvin was convicted – it is all of the other murderous cops who got away with it that prove that the system is broken. Had there not been video evidence of Chauvin’s actions, he likely wouldn’t be headed to jail, and THAT is how broken our system is. Ring of Fire’s Farron Cousins discusses this.

Attorneys for convicted murderer Derek Chauvin appeared in court this week to argue that again, the convicted murderer Derek Chauvin, I believe it is not Chauvin, sorry, should not go to prison. And the reason he shouldn’t go to prison, they argued, is because he’s 45 years old. He’s a police officer in not great health. He probably doesn’t have much longer to live. So it would be really unfair that even though he was convicted on three separate counts of murder, to send him to jail. I mean, come on, right? You can’t, you can’t send a 45 year old to jail for murder. The argument is this. This is, I’m going to read this two paragraphs, bear with me here. But I want everybody to hear what his lawyers wrote to the court this week. This is insane. Considering the fact that there are multiple videos showing Chauvin murdering George, George Floyd. Right. This is incontrovertible evidence. But his lawyers claimed, the system is broken and he can’t go to jail. Instead, give him probation.

Here’s what they argued. Mr. Chauvin was born in 1976 to a loving mother, father, and sister. He grew up near the twin cities and completed high school in a local suburb. Although Mr. Chauvin at a young age, struggled to find passion for a particular career, he eventually decided to become a police officer. After years of work, Mr. Chauvin obtained his bachelor of science in law enforcement in 2006, while working as a Minneapolis police officer. Chauvin had a stable job having worked full time for the Minneapolis police department for 19 years. Mr. Chauvin is 45 years old now, as he stands before the court. At the time of the offense conduct, he was 44 years old living with his wife. Mr. Chauvin’s age weighs in his favor when determining a sentence, the life expectancy of police officers is generally shorter in public, and police officers have a significantly higher average probability of death from specific diseases, than did males in the general population.

Mr. Chauvin is now 44 years old. Hold up. You say, now he’s 44. But you said he was 44, but now he’s 45. And now you’re saying he’s 44 again. Some Benjamin Button stuff there. Mr. Chauvin is now 44 years old and is nearing the healthier years of his life. He has been preliminary diagnosed with heart damage and may likely die at a younger age, like many ex law enforcement officers. So hold up, he’s entering the healthier years of his life, but he’s also not healthy enough to go, to go to jail. And before he, he committed the crime, he’s living with his wife and he was born to a loving mother, father, sister. What about George Floyd? What about George Floyd’s family? Huh? That’s what I want to know. I understand everybody constitutional guarantee to council, to legal counsel. And it is the job of defense lawyers to go out there and make these horrible arguments. But I want to know how these lawyers sleep at night. I want to know how these lawyers can make an argument like this. Then go back home to their families, to their children and look at them and say, I had a good day at work today, kids. Oh honey, this is a wonderful dinner.

Wow. What an end to a great day. Let’s go rest peacefully in our beds after making these horrific arguments in court. It takes a special kind of person to be able to do that and not a good special either. Again, I understand everybody’s entitled to legal representation. I am not saying that these lawyers shouldn’t be doing this. But I hope it pains them. I hope they go home and realize how horrible they have to be for their job. Because this argument is despicable. The system is not broken in the way that Chauvin’s lawyers say it is because later in another part of the filing, they do say the system is broken. It’s broken in the fact that Chauvin only went to jail because there were multiple videos showing him killing George Floyd. Had those videos not existed, Chauvin would still be on the police force. That’s a fact. The only reason the system is broken is because there’s too many other murderous police officers, even ones caught on video, who aren’t behind bars. That is the broken system that we live in with the United States today.