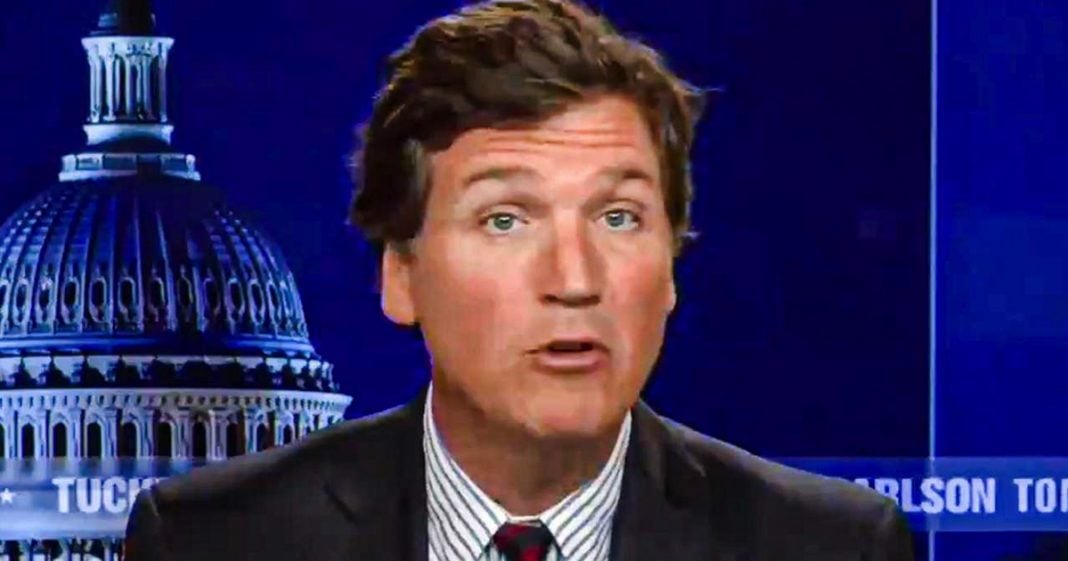 During a segment this week, Fox News host Tucker Carlson went on yet another anti-vax rant where he warned his audience that they will be subjected to “medical Jim Crow,” which was his fancy metaphor for medical segregation because some people are choosing to not get vaccinated and certain venues are now refusing to let those people in. Tucker is likely vaccinated, and his entire show is a complete farce, but his brain is clearly broken. Ring of Fire’s Farron Cousins discusses this.

Tucker Carlson has gone completely off the rails. And one of his latest little diatribes this week was about the fact that vaccines have somehow become what he calls, medical Jim Crow. And what that means is that, according to Tucker, people who are not vaccinated are somehow going to be segregated from the rest of society because certain businesses and organizations do not want people without the vaccine to come into their private businesses. Take a look at what Tucker Carlson had to say about this matter. Here it is.

Tucker Carlson:                  Pretty much everybody agreed that segregation was the worst thing this country ever did. Forcing certain categories as citizens into separate lesser accommodations, barring them from public places, treating them like lepers or untouchables. That was completely immoral and wrong. We were told that a lot and most of us strongly agreed it was wrong. So imagine our confusion today looking out across the country, the very same people, literally the very same who just the other day told us that segregation was immoral are now enforcing segregation. Should we be surprised? Probably not, but we still are. Just this morning, the New York Times informed us that unless you can prove you have taken the injection that the Democratic party demands you take, you are no longer permitted in bars, comedy clubs, even some dance competitions in the state of New York. You’re too dirty to appear in public. You’re not welcome near normal people. Want to watch the NBA playoffs in person? You had better be vaccinated to do that. Otherwise the New York Knicks will bar you from Madison Square Garden. You can still go see a baseball game if you want to, but be warned, you will be sitting in your own roped off section, marinading in your shame with the other disobedient bad people. Medical Jim Crow has come to America. If we still had water fountains, the unvaccinated would have separate ones.

Now, if you’re like me, the first thing that jumps out at you about that clip is when he said segregation was the worst thing that’s ever had. He almost said, he almost said segregation was the best thing that’s ever happened. He almost had that massive Freudian slip where he actually came very close to endorsing segregation here in the United States. Now I do not know for certain, if Tucker Carlson is in fact vaccinated, I have to imagine that he is. He’s not an idiot, but he knows how to talk to idiots and that’s his audience. And I’m sorry if that offends you, but it’s true. What Tucker Carlson is doing and has been doing for weeks now is trying to tell his audience that it’s totally okay if you don’t want to protect yourself or anyone else around you, it’s okay to be a selfish prick is what Tucker Carlson is telling his audience because let’s face it, that’s what they are.

But the other side of that, it does kind of blow my mind a little bit, the fact that you would have hosts on conservative media, actively trying to put their audiences in harms way. Right? If you kill them off, you don’t have an audience left. So I don’t understand the logic of that, but whatever. And I love how he also called it, you know, the Democrat vaccine. Wasn’t your guy, Donald Trump, the one who’s still out there today, taking credit for it? I mean, technically these things were developed while he was president of the United States, but now suddenly there’s a Democrat in charge, so, oh God, you shouldn’t get the vaccine. None of this makes any sense. Nothing Tucker Carlson ever says makes any sense. But this to me is really dangerous rhetoric. Not that he hasn’t had plenty of dangerous rhetoric in the past, especially with his attacks on minorities, both in the US and outside the US. But he’s actively putting his audience in harm’s way because of this. And no, this is not medical Jim Crow.

If you make the choice to not get yourself vaccinated, you deal with the consequences. I mean, isn’t the Republican party supposed to be the party of personal responsibility? And here you are telling your audience to not take responsibility and then to whine like little petty victims when they’re not allowed to do certain things because private businesses are allowed to tell them no. And by the way, wasn’t it the Republican party who went to the Supreme Court to argue that private businesses do have the right to refuse service to anyone based on anything if they felt it violated their core beliefs? So the whole thing, not just with Tucker Carlson, but the whole anti-vax movement on the right is steeped in hypocrisy at every single level, because you can’t be mad that corporations are telling you, you can’t come in here. When you’re the ones who fought for corporations to have that right. You can’t call it the Democrat vaccine and then give Trump credit for creating it. These people are absolute idiots, and I’m not talking about the host. They know what they’re doing. Tucker Carlson is very intentional with what he is doing here. It’s the audience that is filled with idiots.