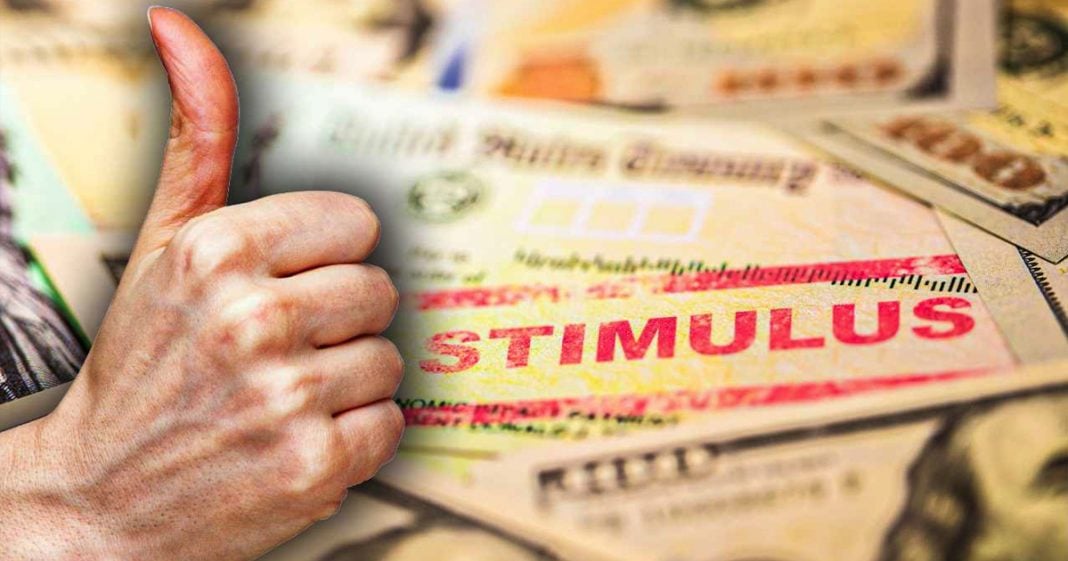 A new study has confirmed the obvious: Giving people money when they have none makes their lives better. This is what happened when the federal government handed out the latest round of stimulus checks back in March, with a nearly 42% reduction in families reporting financial hardships and a reduction of 20% in those households feeling economic anxiety. This is the relief that programs like student loan forgiveness, Medicare for All, and universal basic income could provide for all Americans, as Ring of Fire’s Farron Cousins explains.

A new analysis of census bureau data shows that the stimulus checks sent out to Americans, as a result of the pandemic, have overwhelmingly helped countless American families. They have reduced economic hardship. They have reduced anxiety. They have helped people to be able to pay their bills. And it all links back to those checks, specifically, the $600 checks that came out in early January, and then the $1,400 checks that came out in March. Here is from the New York Times. This is based on the findings of the census bureau analysis. Among households with children, reports of food shortages fell 42% from January through April. A broader gauge of financial instability fell 43%. Among all households, frequent anxiety and depression fell by more than 20%. While the economic rebound and other forms of aid no doubt also helped, the largest declines in measures of hardship coincided with the 600 checks, $600 checks that reached most people in January and the $1,400 checks that mostly distributed in April. It’s clear as day. People who lack money and have trouble paying bills because they do not have money do better when they have money. Okay.

We, we, I’m glad they did the analysis, but at the same time, did we really even need it? Did we need super smart people to tell us that, hey, when you take somebody that has no money and give them money, their life improves. We, we know that. And at least now we have obviously, you know, from confirmation that this is what happens. But here’s the thing, we can go even further. Those tiny checks, and of course, to, to the people who desperately needed them, they were not tiny checks, but these checks $2,000 over three months made that big of an impact. $2,000 over three months made this much of an impact. So imagine the impact we could have on this country, the economic hardships that we could eliminate if we did something like, I don’t know, forgive student loan debt, or enact Medicare For All. So people no longer had to worry about their medical bills. Didn’t have to keep making those payments. Or if we had a universal basic income here in the United States, thousand bucks a person a month. Any one of those programs and especially all three taken together would absolutely lift this country to levels we have never seen. And not just economically, I’m also talking about mentally.

A 20% reduction in anxiety and depression from having $2,000 spread out over three or four months, that alone is worth it. To reduce the stress that human beings has and stress is a major cause of health problems here in the United States. So we reduce stress. We cut down on ailments as a result of that. Productivity would increase, hey, there you go corporations, you should be pushing for this crap. Giving people who do not have enough money more money helps the economy. It helps their families. It helps their own mental health. There is literally no downside to it. Sure. Okay. Oh my God, the deficit, ooh, the deficit. Nobody cares. Nobody cares. Not to mention the fact that if we made something like this permanent, if we continued to give people money or alleviated other sources of debt for them, and they had more money, it would therefore increase economic activity, which would increase tax revenue, which would then decrease the deficit. There’s no good argument to be made why we shouldn’t be doing these things on the regular. And this study proves that.