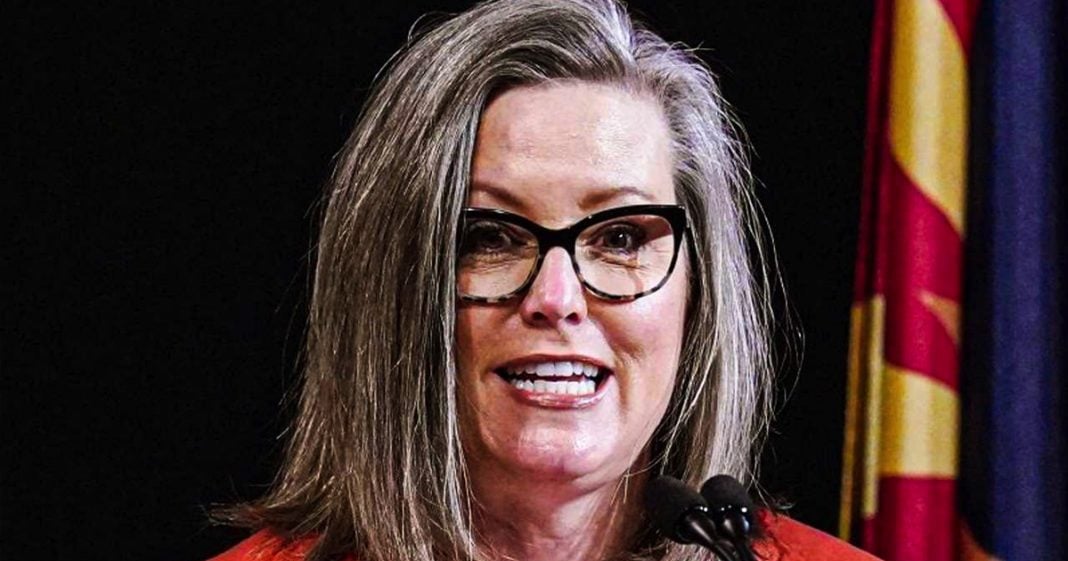 The Secretary of State for Arizona says that the audit process for the Maricopa County ballots is completely off the rails and riddled with errors. Cybe Ninjas employees are leaving ballots unsecured, accessing private personal data, and generally not following any kind of security protocols whatsoever. This was completely predictable, and many actually did predict that this is what would happen from this complete farce of a process. Ring of Fire’s Farron Cousins explains what’s happening.

We all know that the group cyber ninjas hired by Arizona Republicans is conducting an audit of the ballots of Maricopa county. But the question is, who’s auditing the auditors? And there actually is an answer to that. The answer is the Democratic secretary of state for the state of Arizona, Katie Hobbs. She has observers. She has authority, essentially over parts of this audit, maybe not all of it. But Hobbs has said this week that they have spotted countless irregularities and massive security flaws in the audit being conducted by cyber ninjas. Here’s just a few. The observers noted confidential documents left out in the open. A security gate that was left unlocked for several days. And at one point a software update that was so riddled with errors and bugs that the cybersecurity company overseeing the audit was forced to roll back to an earlier version. Now, as we’ve reported and others have reported too, but when this began cyber ninjas, this was the first ballot audit they have ever conducted. This isn’t something that this group knew how to do. It’s a new thing for them.

So they’re learning as they go. But you’re leaving secure gates open. You’re leaving personal private data laying out in the open for just anyone to have access to. That is a massive security breach. It gets more. You’ve had Republican senators come in and tour the area and they’re not allowed to use their cell phones, you know, because it’s a secure area. But of course, the observers witness state Senator Wendy Rogers, Republican, taking notes with a black pen in violation of the stated rules. Rogers and former secretary of state, Ken Bennett, also a Republican who serves as the Senate liaison to the audit team were both seen with cell phones in violation of policies. Okay. So the cell phone one’s pretty obvious. But why, why does it matter if they’re taking notes in black pen, you might ask? Well I’m glad you asked that question. What color pen do we use to fill-in ballots, blue or black ink? That’s it. Those are the only ones allowed.

So on the audit floor, there’s no blue or black ink pens allowed whatsoever, because somebody could screw with a ballot and either render it invalid or change the vote. And here we have Republicans, Republican lawmakers, violating these rules. And of course, cyber ninjas doing virtually nothing at all to protect the ballots that they’re auditing. This whole thing has been a farce from the beginning, but this new information coming from Katie Hobbs, who, by the way, announced this week, she’s going to run for governor of Arizona, this shows us just how fraudulent this whole process is. They don’t care about safety. They don’t care about security. They don’t care about the integrity of the ballots. They don’t care about any of that. All they care about is making their money, continuing the big lie, going as slowly as possible so that they don’t have to release the inevitable, inevitable results showing that there was no fraud whatsoever.

And in the meantime, if you’re in Maricopa county, your personal data is up for grabs. The company wants to get into the state systems and access every single piece of data they have on you. Now, there is no need for that. There’s no reason that they would want to do that other than to take it, copy it, and possibly sell it to other people. I mean, that would be literally the only reason why you would want access to that data as it is not relevant to the audit that is taking place. You have the information you need right in front of you. This company can’t be trusted. And I hope that once all this is over, there is a real audit of the auditors to find out how badly they screwed up and to make sure they didn’t take any private data with them.