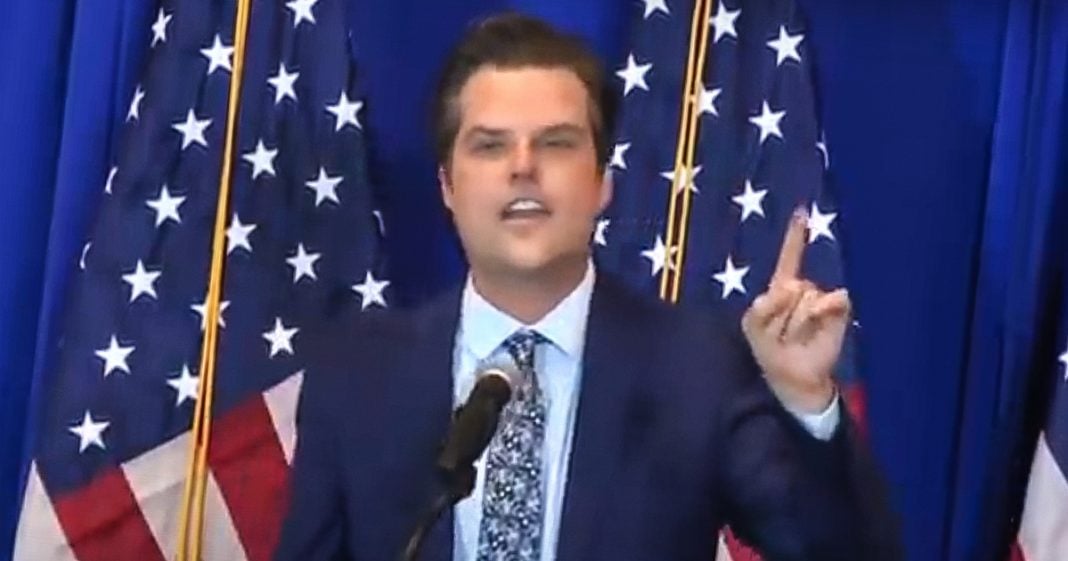 Mike Papantonio:             Congressman Matt Gaetz has big plans for his future, but an ongoing DOJ investigation might end those dreams this summer. Joining me to talk about this is Farron Cousins from the trial lawyer magazine. Eddie Munster’s back in the news almost every day, but this is crazy headlines. He wants to run for president and he’s doing it so he can help Trump during the debates. He says he can be the attack dog and he can take the heat off of Trump if Trump decides to run. Wow. What, what is your take?

Farron Cousins:                  You know, I’m still kind of shocked that Gaetz is going around publicly and of course, right now he’s on his little cross-country tour with Marjorie Taylor Greene, acting like his life is not totally falling apart behind the scenes. But, you know, this comment he made last week that, yeah, I, I’m considering running, running for president in 2024. I can handle what’s left of Biden, was what he specifically said. And this guy doesn’t think that anything is going to touch him. And I don’t know if it’s because he’s putting on a brave public face or if he legitimately believes that he is not in any danger whatsoever, because he’s never really been in trouble. Daddy’s gotten him out of everything in his past.

Mike Papantonio:             A politician, no matter what they do, I’m not going to resign. You know, they’re being told by leadership, don’t resign. I mean, it proved true with Trump, right? He ran for president. Proved true with Bill Clinton. I mean, you know, they had him for perjury. Don’t resign, life as usual. It’s almost like the last person to resign was Richard Nixon. But, so this is the course they’re taking and he, it’s the Gaetz Greene team. Tell me about Marjorie Greene, how she fits into all this.

Farron Cousins:                  She is one of the few people who’s willing to say that I still stand with Matt Gaetz. And of course it’s because they both are just devoted disciples to Donald Trump. So they’re on their little tour right now, trying to claim the election was stolen, trying to really rally the Trump base because that’s also the Gaetz and the Greene base. That’s what they need to continue their political career. So if Matt Gaetz does want to run for president, he’s going to need those people that are showing up at his rallies now to show up for him at the polls. But like you mentioned, Gaetz doesn’t necessarily want to run for president because he thinks he’ll win. He is basically the Trojan horse candidate. There’s lots of whispers that Ron DeSantis, Florida’s governor, might want to run. And in order to keep DeSantis’ hands clean, to not make any Republicans mad, you send Gaetz out there on the debate stage to hurt everybody else. And you say, can’t we just get along and be nice.

Mike Papantonio:             Of course, with DeSantis, I mean, DeSantis has got to understand the guy’s radioactive.

Mike Papantonio:             You don’t want his name around. Tell, just take a minute on the Marjorie Greene. What, what, what are the hits on her? What, why, what are the problems there? How does she fit in so well with Gaetz?

Farron Cousins:                  I was going to say, it depends on the day of the week with her, because she’s got a new scandal more frequently than this guy. The most recent one, obviously, where she said that wearing a mask is akin to what happened during the Holocaust. You know, that obviously was a hugely disgusting statement by her. There’s the video that surfaced of her from about a year or two ago, harassing AOC, this was before Greene was even in Congress, you know, peeking through her mail slot, screaming at her in her congressional office. The, the ads that she has put out with the sound of gunshots when she mentions Pelosi’s name.

Farron Cousins:                  Well, you know, I do have to add here too, because another story about Matt Gaetz came up in the last couple days. This one involves a yacht that Gaetz was, Gaetz and his fiance, were allegedly going to buy this yacht. They had $155,000 per aside. The yacht, by the way, is named Ol Pappy.

Farron Cousins:                  You know, that, that’s my theory. Of course, it’s just a theory, but I really, look, when you’re in as much trouble as he could be and you have a lot of money put aside and suddenly you can’t account for the money. The feds need to start checking with his friends.