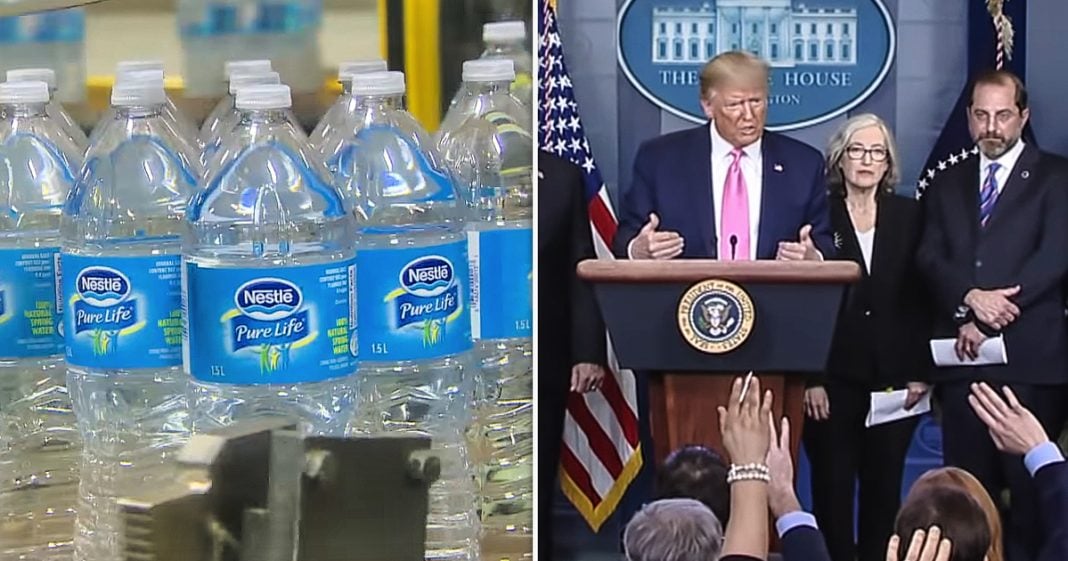 Via America’s Lawyer: It looks like Nestlé won’t stop drinking more than its fill, as officials across the country continue to grant the company freshwater extraction permits. Mike Papantonio and Farron Cousins discuss more. Also, reports surface of the DOJ quietly keeping tabs on CNN and Washington Post contributors. RT correspondent Brigida Santos joins Mike Papantonio to discuss how the federal government has been conducting surveillance of American journalists for decades.

Mike Papantonio:             Nestle isn’t satisfied with just sucking all the water out of California. Now they’re moving into other environmentally sensitive parts of the country. Joining me now to talk about this is Farron Cousins. Farron I have to tell you this, I get more emails that say, and I believe this and I stick by it, you honestly are one of the best progressive talkers in this business.

Mike Papantonio:             I, and I, I have no reason to say that other than the fact, I get covered up with emails, Pap, this guy’s great. He’s great. You are. You just do such a great analysis and thank you for that. So, so let’s hit this. We’ve talked about Nestle in the past. They’re like a moving mob, aren’t they? I mean, they’re locust.

Farron Cousins:                  They, they, they, they really are. And as they continue to suck all the water out of California, now they’re coming down to these environmentally sensitive areas of the state of Florida. And, you know, you’ve got this hyper-partisan Suwanee river management board that gave them the green light to start pumping, I think 400 million gallons a year from Ginnie Springs, right around Suwanee. Even though you had a public in this entire area that said, no, we do not want Nestle to move in this area. We’ve seen what they’ve done up north. We sees what they’ve done out west. We’ve seen how Nestle operates. Don’t let them come in. And this nine member panel said, well, we hear your concerns.

Mike Papantonio:             Yeah. And so what this, what this panel of buffoons is the best way for me to say it, they’re absolutely buffoons. I’d like to, matter of fact, I have a list. Maybe we’ll put it up on the screen. But this panel of buffoons, this is the deal. Nestle, you can come in here and take 400 million gallons of water from our spring, from our aquifer, every year. And you know what, all you have to pay is $115, $115 is what they’re paying to get this.

Farron Cousins:                  Right. I, I mean, that’s a little cheaper than the permit they got out in California to take billions of gallons. But what Nestle is going to do here, the same thing they’re doing in California, you pump water out of the source, which they’re going to go to the source of Ginnie Springs. And they’re going to argue that, look, look in the immediate area around Ginnie Springs, you still have just as much water. And that may be true because that’s what they argue in California. But it’s what happens downstream. You’re not starving the immediate area, you’re starving the flow of the body of water, the flow of the aquifers, and you end up starving the people downstream that depend on this.

Mike Papantonio:             So, okay, California, let’s, let’s change. California has been in the worst drought that they’ve seen in decades. They, they can’t do anything about it. The state is burning up. It is in embers. And so Nestle is still sucking hundreds of millions of gallons out of their aquifer and nobody seems willing to push back. What is it about Nestle that, that, where they simply dominate the environmental policies of these states? What’s going on?

Farron Cousins:                  Well, I think what Nestle has working for them is being a multinational corporation with billions of dollars at your exposure, or disposal, excuse me, they have one of the most sophisticated PR machines that I think I’ve ever seen. I recently did this big expose on Nestle and I dig into it. I go to Nestle’s website, they have for every kind of environmental damage they’ve done, they have their own separate website talking about why, oh no, we’re actually helping the local environment in California. They have a page dedicated to the destruction they’re doing in Florida. They have it for other areas of the United States and Canada as well, fully coordinated PR campaign for everything they do.

Mike Papantonio:             I got an early look at the article that you wrote for the trial lawyer magazine. As a matter of fact, it’s the cover story. It’s excellent. One thing you point out is it’s not just about this. Let, let’s talk about the Nestle story. You have a list. It talks about the de, deforestation. I mean, there, it’s South America, man, if they need it, the trees don’t matter. Environment doesn’t matter. We’re going to take it. The, the, the idea of melamine that they found in, in children’s milk in China, very dangerous. But they were busted on that greenwashing. They figured out best greenwashing in the business. These people are excellent. This really got me, the relationship to Robert Mugabe called the butcher. You want to add anything to that? This list was incredible.

Farron Cousins:                  You know, there’s so many more things I couldn’t even fit into this piece. But they, they’ve basically been having indentured servants is what they’ve been described as over in Southeast Asia that go out there and they do all the fishing. They work for pennies a day and if you don’t meet your quota, you know, bad things happen to you. You die, they dump your body overboard. Nobody ever sees you again. And that’s all for Nestle’s Purina brand. This is for your cat food and dog food. The fishermen are dying just to give, you know, fluffy a couple extra more treats.

Mike Papantonio:             This, this. This is that panel of geniuses. I just have to throw a few names out. Virginia Johns, Charles Keith, Richard Schwab, Virginia Sanchez, Harry Smith, Larry Sessions, William Lloyd, Larry Thompson. These are the people, these are the politicians that said, yeah, we know about your terrible history. It’s all been presented to us. It’s been, we’ve been told right off the bat, what this is going to do to our aquifer, what it’s going to, how it’s going to absolutely affect our aquifer. But you know what? We’re going to let you do it anyway.

Farron Cousins:                  Right. It, it’s absolutely disgusting with these individuals did not just allowing the corporate locusts to come in, but completely ignoring the constituents in the area.

Brigida Santos:                   The justice department has informed a CNN Pentagon correspondent, Barbara Starr, that the justice department secretly obtained her work and personal phone and email records in 2017, even though she personally was not the target of any investigation. Three reporters with the Washington Post have also been notified that their work home or cell phone records were also seized. The DOJ secretly collected what’s known as toll records, meaning information about communications made to and from the targeted phones or email accounts, including the duration, recipients and dates. But it reportedly did not obtain the content of any phone or email communications. Now, a DOJ spokesperson says the target of these investigations was not the news media, but those with access to classified national defense information who provided it to the media.

Mike Papantonio:             Yeah. We’d like to think it’s just bumpkin Trump, but this has been happening administration after administration. You recall, I think one time we did a story on the Frank Church hearings that took place in the 1970s, where they found out that the government was following journalists. They actually were threatening journalists. Seymour Hersh, as a matter of fact, was threatened with death and it all emanated from the FBI, it emanated from the department of justice. Does the justice department have free reign to seize a journalists’ data? Is that where we are right now in America?

Brigida Santos:                   Pretty much. The DOJ is legally allowed to obtain journalists’ records through a court order without journalists knowing as long as the attorney general authorizes subpoenas related to news gathering activities and the DOJ has determined that the case falls under extraordinary circumstances, by typically citing harm to national security. By doing this, the government might not exactly learn what was discussed between a journalist and their source, but it might actually reveal who that source is or provide clues. Now, after doing this, the DOJ must inform journalists that their records have been seized, either 90 days after the government receives any subpoenaed data, or after the justice department determines there’s no longer a threat to the investigation or national security. And that could be many years.

Mike Papantonio:             Yeah. So it’s, so sorry we did this. We, we got everything we wanted. We’re so sorry we did this. But you’ve been spied on, your family’s been spied on, and it’s been going on for years. Gee, it is, it is the Frank Church kind of saga that we saw in the seventies where the FBI was in, CIA, NSA, in everybody’s backyard. The DOJ’s war on whistleblowers didn’t start under Trump. How, how has the criminalization of news gathering gotten worse over the years? It’s certainly gotten worse and I don’t think you can blame one administration. I think it’s administration after administration where this expands more and more in this Orwellian kind of way. What’s your take?

Brigida Santos:                   Yeah. Over the past two decades, at least, the government has increasingly cracked down on whistleblowers. Now, before president George W. Bush only one person had ever been convicted under the espionage act for leaking classified information to the press. And remember the espionage act was designed to go after spies during world war one, not people who expose government crimes and corruption. During the Bush administration, the espionage act was used to jail reporter, Judith Miller, for refusing to reveal her source in a CIA leak investigation. The Obama administration then ramped it up using the espionage act to prosecute more people than any prior administration combined for leaking sensitive information. President Trump then of course, inherited that blueprint that was laid out by his predecessors and continued the war on whistleblowers, further undermining press freedoms that are guaranteed under the first amendment at a time when trust in media has fallen to historic lows.

Mike Papantonio:             Yeah, she was a target because she was trying to tell the world that Iraq was based on an absolute lie. That the administration, the two administrations had lied about it. That it was killing, killing American soldiers, killing Iraqis by the, by the hundreds of thousands and it was all based on a lie that was created by primarily the news media. It was created by MSNBC, CNN, along with the weapons industry and of course driven by the FBI and the CIA. And so she wanted to expose all that and, you know, if you think about it, that’s real journalism. So she was certainly a threat. Brigida, thank you for joining me. Okay.