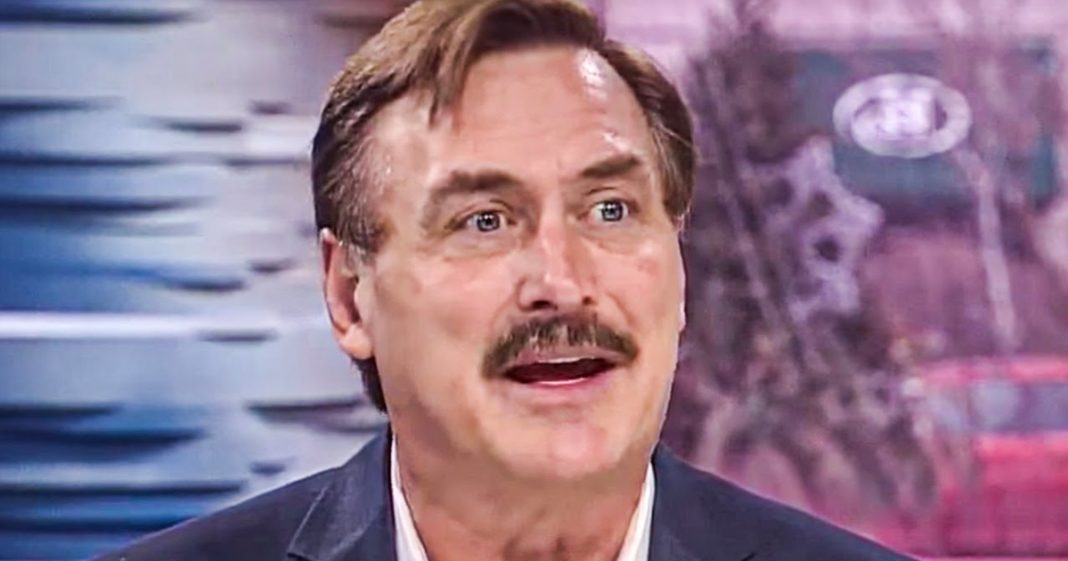 Mike Lindell, the embattled CEO of My Pillow, could end up actually losing his own company as a result of the massive defamation lawsuit he is facing. Dominion Voting Systems is arguing that the company itself is liable for Lindell’s words and actions, and therefore they are the ones that have to pay. This argument may or may not stand, but whatever happens won’t be good for the company at all.  Ring of Fire’s Farron Cousins discusses this.

Mike Lindell does not have $1.3 billion cash on hand, but Mike Lindell, the founder of My Pillow is being sued for $1.3 million in a defamation suit brought by dominion voting systems. So dominion understanding that Lindell does not have enough money to pay this lawsuit if they win, has decided to argue in court this week, that not only is it Mike Lindell that’s liable for the defamation, it’s the My Pillow corporation itself. Here is what they wrote in a court filing this week. Now My Pillow claims that the My Pillow guy was not speaking for My Pillow when he gave speeches at My Pillow sponsored rallies in Washington DC, or when he otherwise exploited election lies to market My Pillow products, which could be purchased on My Pillow’s website using promo codes, like fight for Trump, Q and proof.

The law is clear that corporations can be held liable for the defamatory statements their employees make within the scope of their employment and in furtherance of the company’s business. And the complaint plainly alleges facts from which a jury could infer that Lindell, who is this day, the president, CEO and spokesman of My Pillow, and who is widely known as the My Pillow guy, was acting as the company’s agent when he exploited lies about dominion to market My Pillow products. They also pointed out and to me, this really is the kicker, the fact that Lindell, when he was banned from Twitter, then took over the actual My Pillow official Twitter account and started tweeting out his election lies from the official My Pillow account.

So I think dominion’s got a pretty solid case here. You cannot divorce the two. Mike Lindell is My Pillow. My Pillow is Mike Lindell. And that’s a pretty strong argument and again, the, the, the coupon codes, you know, fight for Trump, Q it has the full thing, but, you know, we can’t say that because YouTube’s algorithms don’t like that. But, and he, he pitched these at rallies that My Pillow, the corporation sponsored. Told people there while spreading his election lies also, hey, use code, fight for Trump and get money off of my idiotic pillows. Yeah. My, My Pillow should be liable for all of this. So what would that mean?

What would that mean for a company that is already struggling to get by. They have lost so much money over the last eight months because of Mike Lindell’s behavior. They’ve been kicked out of, I think at least 23 retail stores across the country, like 23, you know, big box stores that are all over the country have said, we’re not carrying your pillows. The company is hemorrhaging money. Mike Lindell is a cancer on his own corporation. And now he might’ve gotten them roped into this $1.3 billion defamation lawsuit as well. Again, I think dominion has made a strong point here in their filings. Mike Lindell used official resources from his own company to spread election lies and therefore the entire company should be held liable for what it’s owner did.