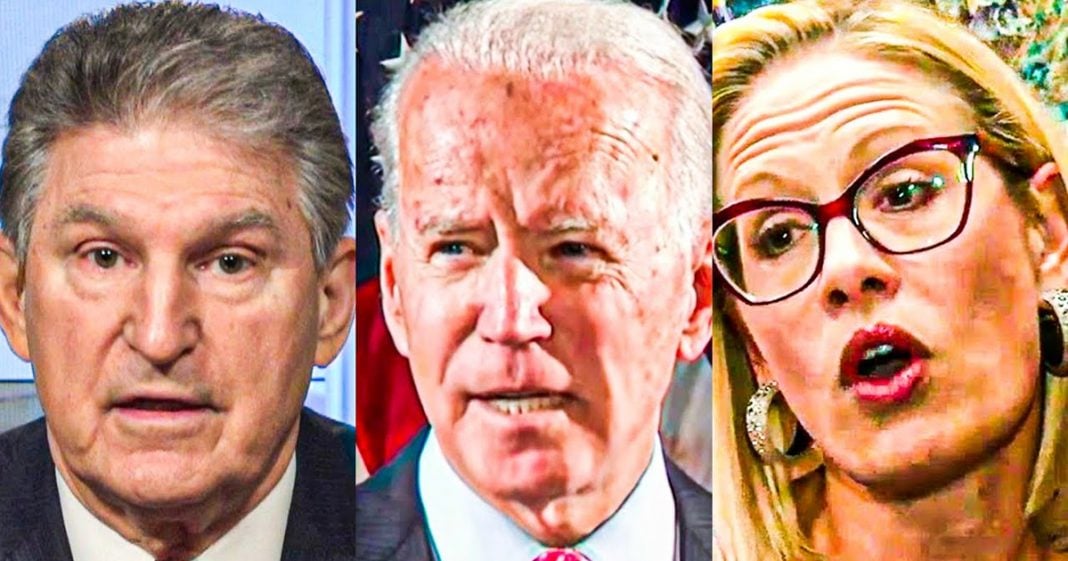 During a speech in Tulsa this week, President Joe Biden took the time to explain why things aren’t getting done as quickly as we’d like in Washington, D.C., and he put the blame squarely on the shoulders of people like Joe Manchin and Kyrsten Sinema. Though he didn’t call them out by name, he did mention the “two Democratic Senators” who vote more with Republicans than with Democrats. He isn’t wrong, and Ring of Fire’s Farron Cousins explains why.

During a speech in Tulsa to commemorate the 100th anniversary of the Tulsa massacre, Joe Biden, president Joe Biden took a little time out of his speech to attack two Democratic senators who remained nameless. But we all know who they were. Here is what Joe Biden said. I hear all the folks on TV say, why doesn’t Biden get this done? Well, because Biden only has a majority of effectively four votes in the House and a tie in the Senate with two members of the Senate who vote more with my Republican friends. But we’re not giving up. Now wonder who those could be? Those two Democratic senators who would rather side with Republicans than Democrats.

Now we all know that is of course Joe Manchin and Kyrsten Sinema. Those were the two Democrats that Joe Biden specifically called out and to be honest, I’m very glad that he called them out. This is something that actually should have happened a month and a half to two months ago. But it does show us something about Biden. Well, first of all, that’s not the only reason things aren’t getting done. Okay. There’s plenty of stuff Joe Biden could do via executive order to get some things moving, canceling student loan debt, at least partial cancellation of some student loan debt. Executive order would take care of that. But now he’s not even considering it. So anyway, yes, there’s things he could do and I don’t like him passing the buck.

But what I do like to see is that clearly he understands the power of the bully pulpit and he knows that he has to go out there and not just divert attention. I think part of it was a little bit to say, hey, it’s not my fault. But I think the other part of it was to say, we need to get things done, but these two people aren’t playing ball. They’d rather go play with the, you know, disgusting Republicans than actually do something good. Like pass the ProAct, pass the for the people act, pass the infrastructure package, increase the minimum wage. I mean, my God, we are less than six months, hell, we’re less than five months into this administration and there’s already what, four things I just named that these two individuals are helping to hold up for the Democrats. And I know they’ve got plenty of Republican help, but my God, this is ridiculous.

One man from West Virginia should not be able to stifle an entire political agenda. One woman from Arizona should not be able to do the same thing either. We have real problems in this country, real problems that these pieces of legislation would help address, some of them more so than others, but they’re desperately needed pieces of legislation. And I am glad that Joe Biden called these two disgusting individuals out for their behavior. Now it’s not too late for them to redeem themselves. I don’t think they’ll ever fully redeem themselves, but hell at least in this legislative session, they could do something good because if they don’t, those two Democrats, Manchin and Sinema, could easily cost the Democrats control of the House, control of the Senate and then two years after that possibly even control of the White House. So yes, call them out Joe. But next time, make sure you name names.