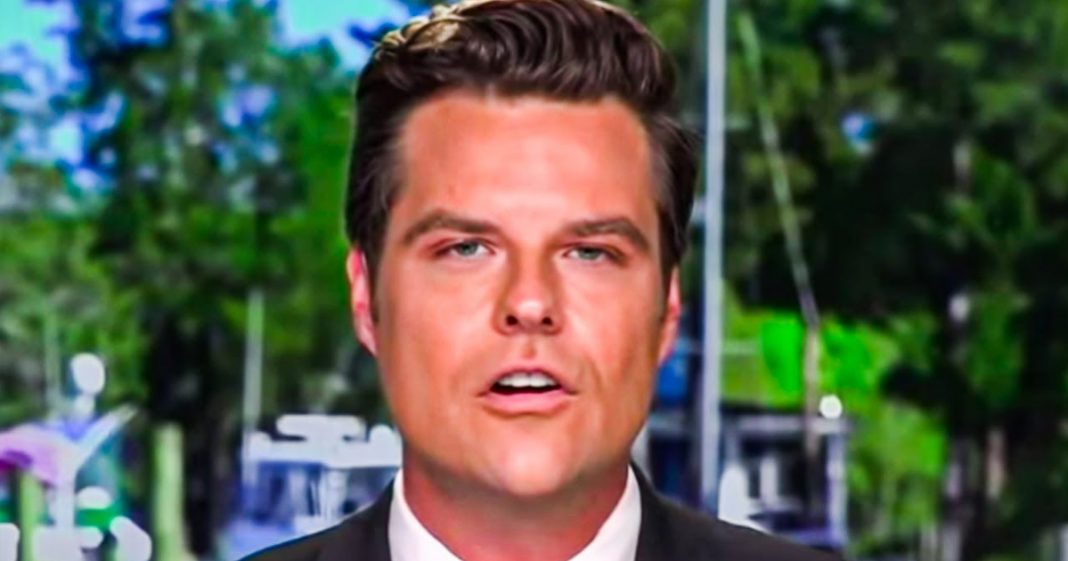 Republican Congressman Matt Gaetz issued a statement through his spokesperson claiming to be the victim of a financial crime. The crime allegedly involves $155,000 that Gaetz and his fiancee had set aside to buy a yacht that has mysteriously “gone missing.” In today’s digital world, it is difficult for money to simply “go missing” without any kind of digital trail, so the claims have been widely met with skepticism across the board. Ring of Fire’s Farron Cousins discusses the issue and asks the questions that everybody wants answers to.

Matt Gaetz just can’t catch a break. Last week, Gaetz said through his spokesperson that about $155,000 that Matt Gaetz and his poor little fiancé had put aside as a down payment on a yacht from St. Petersburg, Florida, that $155,000, poof, it’s gone. They don’t know where the hundred and 50, some odd thousand dollars went. But they are totally sure that they are the victims, as the spokesperson said, of a financial crime. And of course they said, they’ve got authorities looking into it, folks. Whew, what weird luck, right? I mean, you got a guy facing massive, massive investigation that threatens to put him away for a couple of decades. And now the money for his yacht, his yacht, has disappeared. Eesh. Now that’s not to say that Matt Gaetz’s was not the victim of a financial crime. I don’t know. I’m not an investigator. I haven’t seen Matt Gaetz’s money, but I do know speaking as someone who is, you know, how to debit card number stolen twice, um, I do know that in today’s digital age, if money leaves your account and goes to a different account, they, they can track that.

In fact, they can track it very easily. So, you know, I would think a couple calls to financial institutions. I understand I, I have never had $150,000, so it’s not in a regular checking account, I imagine. But again, I also do imagine that you had that money somewhere where it’s traceable, right? Right, Matt? Or are we talking about $150,000 that you had in a briefcase chained to your wrist, you went to the bathroom, left the case on the table and came back. Oh, my money is gone. I don’t know because you’re not giving us a whole lot to work with here. But again, the marina owner where the yacht is housed, a yacht was named Ol Pappy, and I had to laugh at that just because you know, you’ve got Pap here at Ring of Fire and Pap is not associated with Ol Pappy in any way. Trust me. But, they said that couple months ago before the yacht was officially yours, Matt, somebody already rechristened it from Ol Pappy to Thirsty is the new name, thirsty. Yeah. Probably not the best name for somebody facing, you know, the kind of investigation that you are. But hey, who am I to judge, right?

So they said it was very weird for the yacht to be rechristened before the sale had actually even gone through or even been finalized. So there’s a, there’s a lot of suspicion, Matt, around your yacht. But I want to ask the better question here. Folks, Matt Gaetz is a career politician. I think he spent one year after he got out of law school, not being an elected official. So he didn’t have time to establish a private practice. He did not have time to go work for a major law firm, bring in a bunch of money and have all this money set aside for a yacht. No, he has been on the public’s, basically assistance, as a Florida politician then as a US politician. So this guy has never had a salary of greater than, what is it $178,000 a year. So how in the hell do you have 150 some odd thousand dollars set aside for a yacht? I know you wrote a book a year or two ago, firebrand, but is that one book, one time when most people don’t know who you are or didn’t know who you are when it came out. Um, does that really give you enough for a yacht? Huh? I don’t know Matt.

There’s a lot of question marks in this story and I’m going to be honest, I don’t buy any of it. I don’t buy it. Where’s the money, Matt. What happened? What happened to your yacht money? If it was in fact stolen, that’s actually a pretty easy thing for investigators to find out. Again, it’s all digital. Unless, of course, you did leave a briefcase full of cash somewhere. Then it is a little bit harder at that point. But if it’s digital, that’s pretty easy. That’s pretty easy, man. Could it be that maybe this money was used to go pay off people so they didn’t flip on you? I didn’t say that. I don’t know. I’m just throwing out questions, Matt. But I think we’d all like some answers because I know you want to know where your yacht money went. But trust me, we want to know where it went even more. And I also would like to know where the hell it came from in the first place. On a, you know, public employee’s salary, you don’t see a lot of those guys buying yachts unless they’re taking a lot of money on the side. You know, from legitimate businesses, but you don’t have one of those. So I am very curious, Matt, and I don’t believe a word that you’ve said.