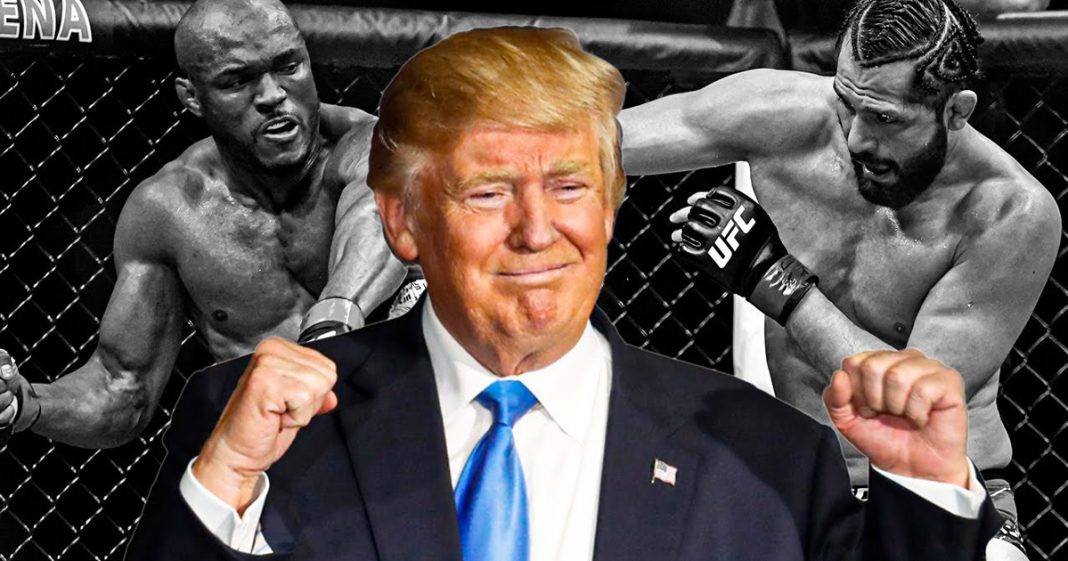 In November of 2019, then-President Donald Trump decided that he wanted to attend a UFC fight in New York City, and federal records show that this little jaunt cost taxpayers more than $250,000. The cost was mostly to house and transport Secret Service agents for the President to have a bit of fun, and the cost included setting up tents outside of Trump Tower for agents to use to protect the building while Trump was there. Ring of Fire’s Farron Cousins explains why something must be done to rein in these ridiculous costs that taxpayers are forced to pay for stupid things like this.

In November of 2019, Donald Trump, I guess, feeling a little bored at the White House, decided, you know what, I want to go to New York city. I want to go to Madison square garden and I want to watch the UFC fight with my idiot son, Eric, who was there with him. And he did. And, you know, this last minute little trip, jaunted up to New York, got to stay in his old place back at Trump tower. And the secret service at a cost to taxpayers of $250,000 obviously had to go with him. And again, because it was such short notice, they struggled to find hotel rooms. So we, the taxpayers ended up paying $224,000 for the accommodations for Donald Trump’s secret service to stay in various parts of New York city. Then we paid another $22,005 and 51 cents, for travel expenses for agents to get back and forth to the city for Trump’s visits. An additional $6,350 on tents to set up near Trump tower. They used the tents as security checkpoints.

So $250,000 that we paid because Donald Trump wanted to go see a UFC fight. This is ridiculous. Now don’t get me wrong. Regardless of whether I love the president or despise them, I understand that they need the secrets, secret service detail on them 100% of the time. I’m not saying that that needs to end. What I’m saying needs to end is that when presidents decide to pull crap like this, something that is not related to their job whatsoever, they should have to pay for it. I don’t care if it’s a Republican or Democrat, when you do stupid crap like this, you should be the one to have to pay for it. We have enough problems here in the United States with actual things that need to happen to better the lives of our citizens. But we’re repeatedly told that no, we can’t afford it. And yet we have to spend a quarter million dollars because the president wanted to go see a UFC fight. That is ridiculous. And no, trust me, I understand a quarter million dollars is not going to solve all our problems here in the United States, but this is not a one-off thing.

We spent millions of dollars for the secret service to go down there to Mar a Lago and watch Donald Trump play golf, millions of dollars. The spending on this is out of control, and we do have to set some kind of limits. Right? Something has to be done to reign this in and yes, it absolutely exploded under Trump, but it happens under Democrats and Republicans alike. And for a country that is repeatedly told you can’t have nice things because we don’t have the money, it me off when the powerful elite get to do whatever the hell they want and cost is not a concern. I get that they have to have secret service protection, and I am not calling for an end to that. All I am calling for is that they have to pay for it if it’s a non-official trip on their own, and if they can’t afford to pay for it, then maybe they cut down on the detail that’s there if they want to make that choice. Or they simply watch the fight at home.