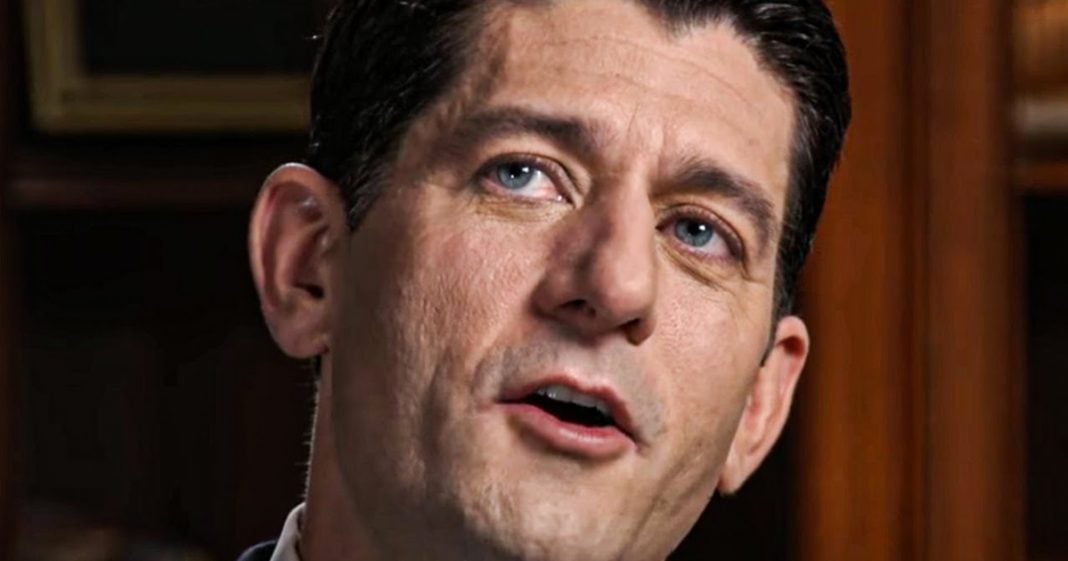 Former Republican House Speaker Paul Ryan is trying to wrestle control of the Republican Party back from the Trump brigade, and he has made several recent public appearances talking about the need to move on from Trump and get back to the basics. Ryan is just as dangerous as Trump, and his attempts to become relevant again seem to show that he has bigger ambitions than just giving advice to his fellow Republicans. Ring of Fire’s Farron Cousins explains what’s happening.

Recently, in fact, actually in a member exclusive video, I talked about the fact that Paul Ryan, former Republican speaker of the House, has been back in the news. And he’s been back in the news because at the time he was going out to support Republican, never Trump Republican, Adam Kinzinger, coming out in support of him. And then last week, Paul Ryan went to California and in California he gave a little speech. And in that speech, he said this, if the conservative cause depends on the populist appeal of one personality or on second rate imitations, then we’re not going anywhere. We win majority’s by directing our loyalty and respect to voters and by staying faithful to the conservative principles that unite us. This was true even when the person leading our movement, wasn’t impressive, polished, and agree and as agreeable as they come.

Paul Ryan wants back in it. Paul Ryan, I think, wants to run for president. Paul Ryan has been sitting, you know, ever since he retired at the end of 2018, he’s been looking around, he’s been watching his entire Republican party just dive deeper and deeper into chaos, and his arrogance makes him think that he’s the guy that can come out of this and bring everybody back to a normal Republican party. And let’s make no mistake here. When he says, you know, one personality, he is talking about Donald Trump, that is an attack on Donald Trump. When he talks about second rate imitations, he’s talking about people like Marjorie Taylor Greene and Matt Gaetz and Jim Jordan and Ted Cruz. Paul Ryan knows how to speak. He knows how to work a crowd. Maybe not the way that Trump does, but he knows how to manipulate people.

That was a good little speech I just read from him. I’m not gonna lie. And Paul Ryan, if he emerges, not only as the savior of the GOP, but as a normal moderate voice, a reminder of a time when Republicans weren’t openly bat crazy, independents might flock to that. Especially if they don’t see material gains from the Biden administration. Paul Ryan would have a clear path to victory. Oh, he may not win over the hardcore Trump base, but that’s a base that is not the majority of the Republican party. That’s something we have to understand. Even though we see these crazies out there, we see them on social media saying these insane lies spreading these conspiracy theories. That’s not a majority of the Republican party and Paul Ryan, believe it or not, is just as terrifying as Donald Trump. Who was it that made it possible for Trump’s agenda the first two years in office to become a reality? It was Paul Ryan in the House, Mitch McConnell in the Senate.

Paul Ryan, as his last act got that pass, tax cut passed. He started a year after that, but he was retired and didn’t do much. He’s made some of the worst decisions domestically, economically, that we have seen coming from the Republican party. He represents everything that is wrong with the Republican party. He got swept in, obviously with the tea party movement. You know, he, he, he was their darling. He was their guy. The Ayn Rand guy. And here he is reemerging as a sensible, matured, disciplined Republican who wants to be a savior and for a party that needs a savior, that’s actively looking for one, don’t sleep on Paul Ryan. I have a prediction that we’re going to start seeing his name crop up a lot more as we inch closer to 2024.