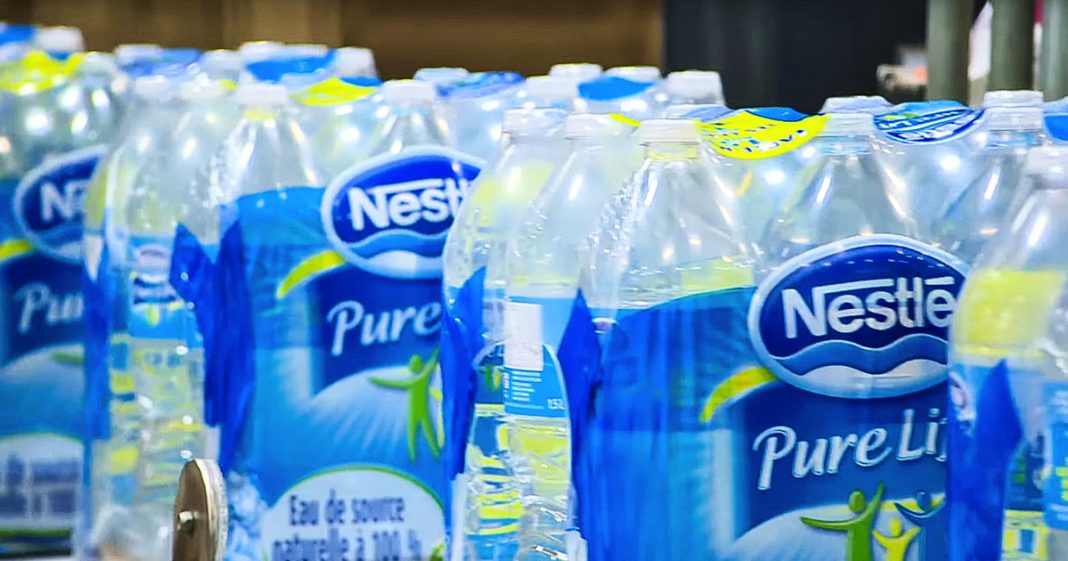 Via America’s Lawyer: It looks like Nestlé won’t stop drinking more than its fill, as officials across the country continue to grant the company freshwater extraction permits. Mike Papantonio and Farron Cousins discuss more.

Mike Papantonio:             Nestle isn’t satisfied with just sucking all the water out of California. Now they’re moving into other environmentally sensitive parts of the country. Joining me now to talk about this is Farron Cousins. Farron I have to tell you this, I get more emails that say, and I believe this and I stick by it, you honestly are one of the best progressive talkers in this business.

Mike Papantonio:             I, and I, I have no reason to say that other than the fact, I get covered up with emails, Pap, this guy’s great. He’s great. You are. You just do such a great analysis and thank you for that. So, so let’s hit this. We’ve talked about Nestle in the past. They’re like a moving mob, aren’t they? I mean, they’re locust.

Farron Cousins:                  They, they, they, they really are. And as they continue to suck all the water out of California, now they’re coming down to these environmentally sensitive areas of the state of Florida. And, you know, you’ve got this hyper-partisan Suwanee river management board that gave them the green light to start pumping, I think 400 million gallons a year from Ginnie Springs, right around Suwanee. Even though you had a public in this entire area that said, no, we do not want Nestle to move in this area. We’ve seen what they’ve done up north. We sees what they’ve done out west. We’ve seen how Nestle operates. Don’t let them come in. And this nine member panel said, well, we hear your concerns.

Mike Papantonio:             Yeah. And so what this, what this panel of buffoons is the best way for me to say it, they’re absolutely buffoons. I’d like to, matter of fact, I have a list. Maybe we’ll put it up on the screen. But this panel of buffoons, this is the deal. Nestle, you can come in here and take 400 million gallons of water from our spring, from our aquifer, every year. And you know what, all you have to pay is $115, $115 is what they’re paying to get this.

Farron Cousins:                  Right. I, I mean, that’s a little cheaper than the permit they got out in California to take billions of gallons. But what Nestle is going to do here, the same thing they’re doing in California, you pump water out of the source, which they’re going to go to the source of Ginnie Springs. And they’re going to argue that, look, look in the immediate area around Ginnie Springs, you still have just as much water. And that may be true because that’s what they argue in California. But it’s what happens downstream. You’re not starving the immediate area, you’re starving the flow of the body of water, the flow of the aquifers, and you end up starving the people downstream that depend on this.

Mike Papantonio:             So, okay, California, let’s, let’s change. California has been in the worst drought that they’ve seen in decades. They, they can’t do anything about it. The state is burning up. It is in embers. And so Nestle is still sucking hundreds of millions of gallons out of their aquifer and nobody seems willing to push back. What is it about Nestle that, that, where they simply dominate the environmental policies of these states? What’s going on?

Farron Cousins:                  Well, I think what Nestle has working for them is being a multinational corporation with billions of dollars at your exposure, or disposal, excuse me, they have one of the most sophisticated PR machines that I think I’ve ever seen. I recently did this big expose on Nestle and I dig into it. I go to Nestle’s website, they have for every kind of environmental damage they’ve done, they have their own separate website talking about why, oh no, we’re actually helping the local environment in California. They have a page dedicated to the destruction they’re doing in Florida. They have it for other areas of the United States and Canada as well, fully coordinated PR campaign for everything they do.

Mike Papantonio:             I got an early look at the article that you wrote for the trial lawyer magazine. As a matter of fact, it’s the cover story. It’s excellent. One thing you point out is it’s not just about this. Let, let’s talk about the Nestle story. You have a list. It talks about the de, deforestation. I mean, there, it’s South America, man, if they need it, the trees don’t matter. Environment doesn’t matter. We’re going to take it. The, the, the idea of melamine that they found in, in children’s milk in China, very dangerous. But they were busted on that greenwashing. They figured out best greenwashing in the business. These people are excellent. This really got me, the relationship to Robert Mugabe called the butcher. You want to add anything to that? This list was incredible.

Farron Cousins:                  You know, there’s so many more things I couldn’t even fit into this piece. But they, they’ve basically been having indentured servants is what they’ve been described as over in Southeast Asia that go out there and they do all the fishing. They work for pennies a day and if you don’t meet your quota, you know, bad things happen to you. You die, they dump your body overboard. Nobody ever sees you again. And that’s all for Nestle’s Purina brand. This is for your cat food and dog food. The fishermen are dying just to give, you know, fluffy a couple extra more treats.

Mike Papantonio:             This, this. This is that panel of geniuses. I just have to throw a few names out. Virginia Johns, Charles Keith, Richard Schwab, Virginia Sanchez, Harry Smith, Larry Sessions, William Lloyd, Larry Thompson. These are the people, these are the politicians that said, yeah, we know about your terrible history. It’s all been presented to us. It’s been, we’ve been told right off the bat, what this is going to do to our aquifer, what it’s going to, how it’s going to absolutely affect our aquifer. But you know what? We’re going to let you do it anyway.

Farron Cousins:                  Right. It, it’s absolutely disgusting with these individuals did not just allowing the corporate locusts to come in, but completely ignoring the constituents in the area.