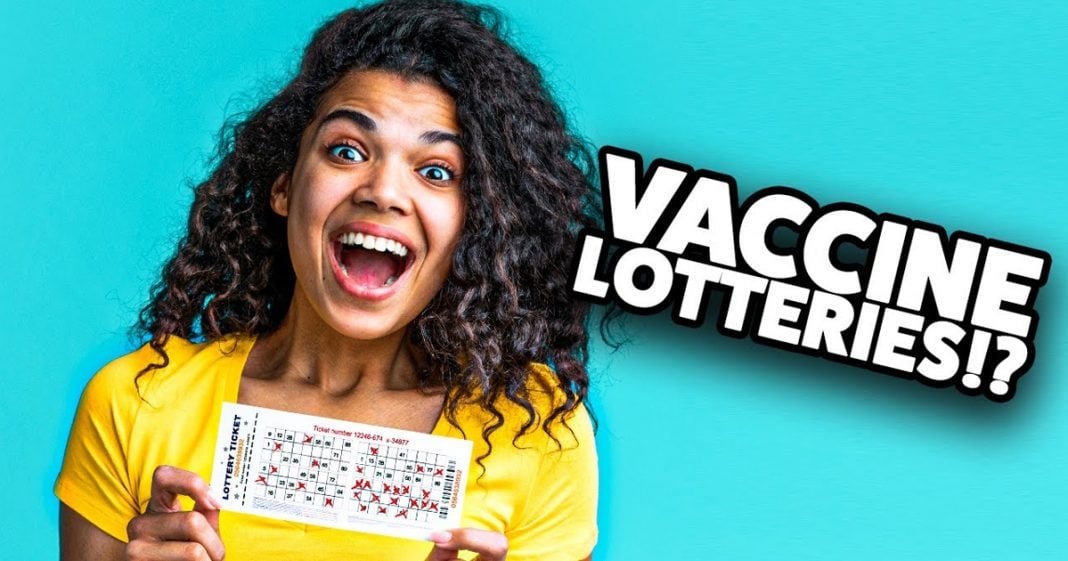 As Americans increasingly refuse to get vaccinated, states are turning to more and more desperate measures in order to get people to get the shot. One of the ways they are attempting to do this is with vaccine lotteries, where fully vaccinated people can submit proof of vaccination and be entered to win cash prizes of up to $1 million. These efforts appear to be working, but it is beyond pathetic that Americans are so reluctant to get the shot based solely on partisan politics. Ring of Fire’s Farron Cousins discusses this.

New York, Pennsylvania, Maryland, Ohio, all of these states are coming up with plans to get their residents vaccinated, including the people who are a little hesitant about getting this COVID vaccine. But what they’re doing is they’re essentially having to bribe people coming up with what they’re calling vaccine lotteries, where people can, you know, submit their vaccine card, showing that they are fully vaccinated. You then get entered into these drawings and in some areas you could actually win up to $1 million cash for doing nothing more than getting vaccinated. And I think that’s a pretty good deal. Here in the United States over the last couple of weeks, maybe month ish, we have seen a decline in the number of people getting vaccinated. We have seen a big decline in the number of people getting their second vaccination shot. They get the first, but then they don’t come back for the second. Overall, our numbers are trending down, even though we’ve got some areas like the state of Florida here, that’s still seeing a, you know, couple thousand COVID cases a day for most of the month of May.

COVID is not going away. COVID is still here. COVID is not getting better in areas where we do not have high enough vaccination rates. So yes, I do think it’s a good thing that these states are doing whatever they have to do to get people vaccinated .look, holiday weekend, Memorial Day, state Of Florida sees a ton of tourism all along the Gulf coast, actually. You’re going to see it in Louisiana, Mississippi, and of course all through Texas. And what’s going to happen in a couple of weeks after that is we’re going to see all these areas, see massive spikes in the total number of COVID cases. We have to get more people vaccinated and if it means shelling out a couple million dollars per state for these massive vaccine raffles, than so be it. You know, let’s do what we have to do because these people aren’t being hesitant, by the way, because they’re actually concerned about what’s in the vaccine. That, that’s not what’s happening. What’s happening is that these people are being partisan because we politicized the virus. We politicized the vaccine. We politicize everything in this country.

Republicans politicize science, say that if the scientists tell you to do one thing, do the opposite because to hell with scientists, it’s ridiculous. Get the vaccine. Get the vaccine if for no other reason, hell, you might win a million dollars depending on where you live. I think that’s a good enough selling point, right? But if you’re not going to get the vaccine, and of course we can’t make you, if you do have legitimate concerns about it. And I know some people do, most people don’t, most people are being idiots, but some people have legit concerns. Some people have reasons why they cannot get it. If they’re already immunocompromised. I understand that. So keep wearing the mask. That’s what you gotta do. But for the idiots, for the actual anti-vaxxers, for the people who think that this thing has a microchip in you, or I think the new conspiracy is that it takes a microchip out of you. Y’all are ridiculous. You’re poisoning the well of public discourse. Stop being idiots and just get the shot.