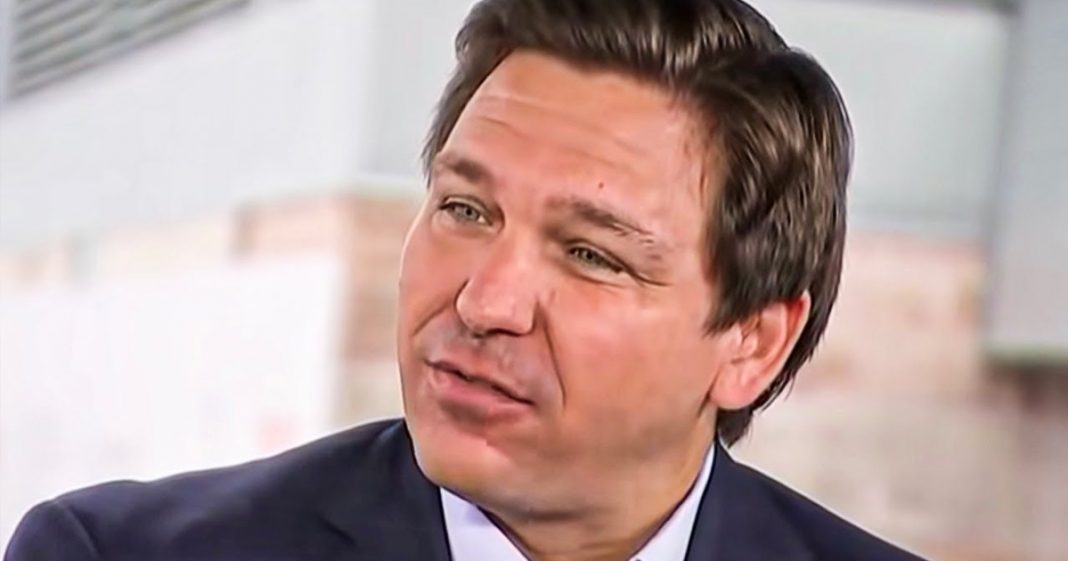 Florida Governor Ron DeSantis has signed a bill into law that would fine social media companies thousands of dollars a day if they ban politicians from their platform. But legal experts have already weighed in and said that this is one of the most unconstitutional pieces of legislation that they have ever seen. The bill flagrantly violates the First Amendment and really is only meant to send a message to DeSantis’s rabid base, as Ring of Fire’s Farron Cousins explains.

This week Florida’s Trump loving Republican governor Ron DeSantis signed a bill into law that will punish social media companies by fining them literally thousands of dollars per day if they ban any politician or person running for office from their platforms. And what Ron DeSantis really should have called this piece of legislation is Donald Trump’s hurt feelings bill, because that’s what it is. That, that’s why this was done in Florida because DeSantis wanted to kiss Trump’s. So he’s like, well, I’m going to make them pay for you, buddy. I’m not going to let this stand. So here’s this legislation that is very clearly unconstitutional, but I’m doing it for you. And yes, folks, legal experts have already weighed in and they say that DeSantis’ attempt to punish social media companies thousands of dollars a day is in fact very unconstitutional. It violates the first amendment because according to rulings on the first amendment of the United States, nobody in this country can be forced to publish the speech of another.

It all also of course, violates section 230 rules of the telecommunications act, which say that platforms do have the right to self-regulate and prevent certain users from being on their platforms based on their rules. Like literally no matter which way you slice it, this is 100% illegal what DeSantis has done, and the courts are going to strike it down pretty quickly. But DeSantis didn’t care or he didn’t know, or he did know, but it doesn’t matter whether he did or he didn’t and, and blah, blah, blah, blah, blah. Because the only reason he did this was to send a message to his low information base that I’m taking on those tech giants we all hate so much. Look at me doing something about it, haha, I’m gonna have this grand signing ceremony. You’re all going to love me. I’m going to make national headlines. And then you’re going to stop paying attention, of course, when the court strike this crap down, because it’s totally illegal. Wow. It’s illegal. And that’s what he’s counting on because that’s what’s going to happen.

His idiotic base, and yeah, I’m a call them that because I live right here with them. Okay. They’re, they’re quite literally my neighbors. They’re idiots. They’re gonna go out, they’re going to celebrate this. They’re going to think that Ron DeSantis has single-handedly reigned in social media companies. And they’re going to completely tune out when the courts start striking this thing down and it’s no longer in effect. They’re going to go about probably the rest of their lives, thinking that this is a thing that’s happening because they never do the follow-up. And most of the media here in the state of Florida is yes, controlled by Republicans. You know, a lot of it is Sinclair. So yeah, they’re going to run cover for him. Downplay these stories, act like it’s no big deal or completely omit them to begin with and his idiotic base is going to move forward, cheering his name because they think DeSantis actually did something. Even though it’s about to be struck down just as quickly as it was signed.