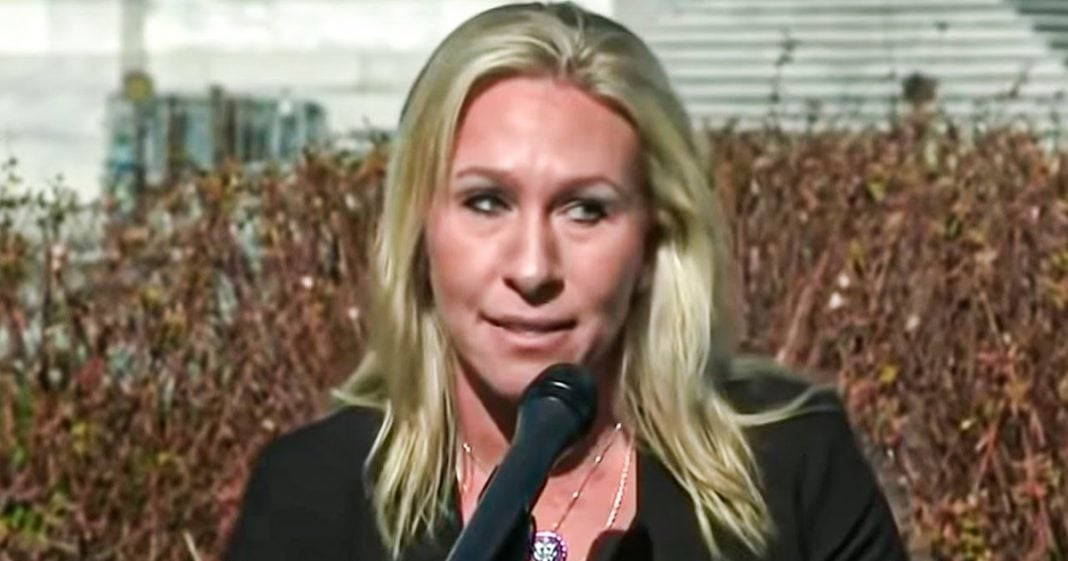 Republican Representative Marjorie Taylor Greene isn’t happy that House Minority Leader Kevin McCarthy called out her ridiculous statements about wearing a mask, so she actually retweeted, with praise, a tweet calling McCarthy a “moron” and a “feckless c*nt.” She deleted the tweet not long after, but screenshots live forever. She has too few friends to be making this many people angry, as Ring of Fire’s Farron Cousins explains.

Republican representative Marjorie Taylor Greene is having a hard time making friends, I guess, would be the easiest way to say it and it’s because she’s a complete loony tune. And recently, of course, as we have discussed last week, she compared having to wear a mask on the House floor to the Holocaust and she has now since then tripled down on those statements. And finally, after several days of trying to not get involved, House minority leader Kevin McCarthy finally issued a statement, he tweeted it out. He said, Marjorie is wrong and her intentional decision to compare the horrors of the Holocaust with wearing masks is appalling. Let me be clear, the house Republican conference condemns this language. He then put out in the tweet, he had a link to his whole statement on it, which was very, you know, mealy mouthed horrible.

But then some random Twitter user quote Tweeted McCarthy, and said, this is from at a simple Patriot says, look you moron. Nobody supported Israel in their recent conflict with Hamas, more than MTG. Her analogy may not have been perfect, but you seriously need to get a grip, you feckless. Hm. Pelosi is the villain here. Actually, no. So that dude, a simple Patriot, and I think simple is the key word here, Tweets this out. Marjorie Taylor Greene then takes that tweet, quote tweets it and says this. Thank you for seeing the truth and how much I support Israel and stand against the left support for Hamas terrorists. So you have a tweet to the Republican leader in the House of representatives, call him a moron and a feckless C word and you thank the individual for doing this. Now this tweet from Marjorie Taylor Greene was up for a staggering six minutes before she decided to delete it.

But of course, screenshots live forever and we all know what you said. And just a quick point of order here. A lot of people have been asking me why I, you know, sometimes censor myself. Like I’m not saying the C word that he mentioned here. They say, hey, we’re all grown ups here. We can handle it. Sure. I get that. The YouTube algorithm, algorithm is what can not. So gotta be careful. Try to cut down on the swearing, especially where it’s like that, YouTube is going to hit you every time. But either way back to the story here, Marjorie Taylor Greene has no friends. I mean, she, I think she has two, she’s got what, Boebert and Gaetz. You can’t afford when you’ve already been stripped of your committee assignments to off the minority leader like you did. That’s why you deleted it because you finally, for once in your life, had a moment of clarity where you realized, wow, that was a stupid thing I did.

I feel like this entire country would be a better place if Marjorie Taylor Greene had that kind of hindsight all the time. Where she realized, you know what, I shouldn’t have said that. I should do something about the horrible thing I did. So keep them off because you will have nobody left very soon. I don’t think Matt Gaetz is going to still be in Congress by the end of this year. I really truly do not. Hell at this rate, I’d be surprised if Matt Gaetz is still in Congress by the end of the summer. And that’s your best buddy. And when he’s gone, you have nobody left. So maybe you ought to stop people off and saying horrible things before you get yourself kicked out of Congress too. Actually, second thought, go ahead and keep doing what you’re doing. Because I would love nothing more than to see you booted out of that body by your own party.