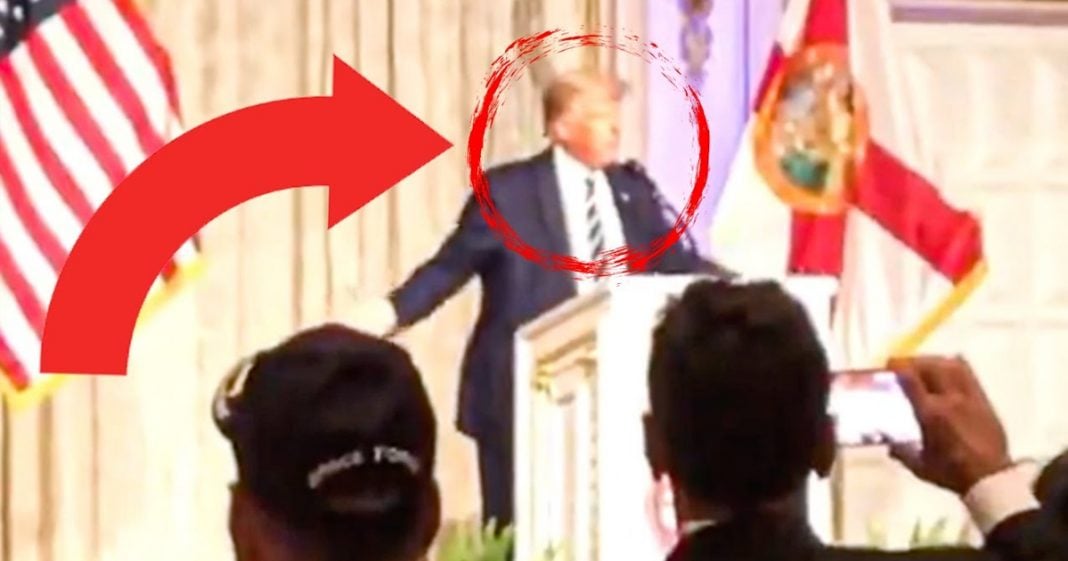 At the recent GOP donor retreat, Donald Trump gave yet another bizarre speech where he gleefully recalled a moment where North Korean guards for Kim Jong Un “roughed up” members of the press. This is the kind of story that Trump loves, and his supporters can’t seem to get enough of them, either. But it also shows how sadistic this man truly is, as Ring of Fire’s Farron Cousins explains.

At the recent Republican donor retreat that took place partly down in Mar-a-Lago, Donald Trump was giving a speech and as usual, he got off on a tear where he started bragging about his meeting with Kim Jong-un and he bragged about probably one of the worst parts of that meeting. So here it is, Donald Trump bragging about reporters getting roughed up, take a look.

Donald Trump:            And, and he’s not making press coming in. I don’t think he’d ever done it before. And the press came in and they were rough, not so much with it, and even not so much with me, but the way they boarded physically, they tried to push guards down. Unfortunately, these were north Korean guards get pushed down and then it was a rough kind of a day for the press.

So this meeting that Donald Trump is referring to took place in June of 2019. So we’re talking about almost two years ago. And the thing that stuck out most to Trump was the fact that those north Korean guards roughed up the press and believe it or not at the time, the Washington Post actually did report on how the guards roughed up the press. This isn’t Donald Trump speaking in hyperbole. It actually happened. In fact, his own press secretary at the, at the time Stephanie Grisham was bruised in the shuffle. So his own people were getting roughed up by these north Korean guards. And here he is a little under two years later, bragging about it, acting like this was a good thing that happened because he hates the press so much and apparently hates his own people so much. Because again, one of his own got bruised.

A woman got manhandled to the point where she was left with bruises. This man is so disturbed that it’s tough to even come up with a word sometimes to describe him. But here’s the thing. He loves stories like this. He loves hearing about how other countries are so rough on their press. That’s why he gravitates toward, towards dictators. Like of course, Kim Jong-un. Like Vladimir Putin, you know, anybody that does whatever they can to silence any dissent in their own country, because that’s exactly the kind of country that Donald Trump wants. And unfortunately it also resonates well with his supporters. They love this crap too. They eat it up because they much like him believe that the press is in fact, the enemy of the people. That might be one of the lasting legacies of the Trump administration is just fully turning an entire sect of the population against the media.

No matter what the media says, you know, trust me, look, we, we hammer on the corporate media constantly here on Ring of Fire. It’s one of our big things. But Trump hates the media not because they’re owned by corporations, not because they’re silencing the truth, but because they had the audacity to speak it about him, because they didn’t silence the truth about him. He claims he didn’t get a fair shake, but he was given every possible opportunity by the press to do the right thing just once during his entire administration. You know, they tried to soften the blow. Instead of saying he lied. They said, oh, it was a misstatement. It was factually inaccurate. They did whatever they could to avoid calling the man an abject liar. And he still cheered on foreign guards when they beat the hell out of him. That’s what the press got for going easy on Donald Trump.