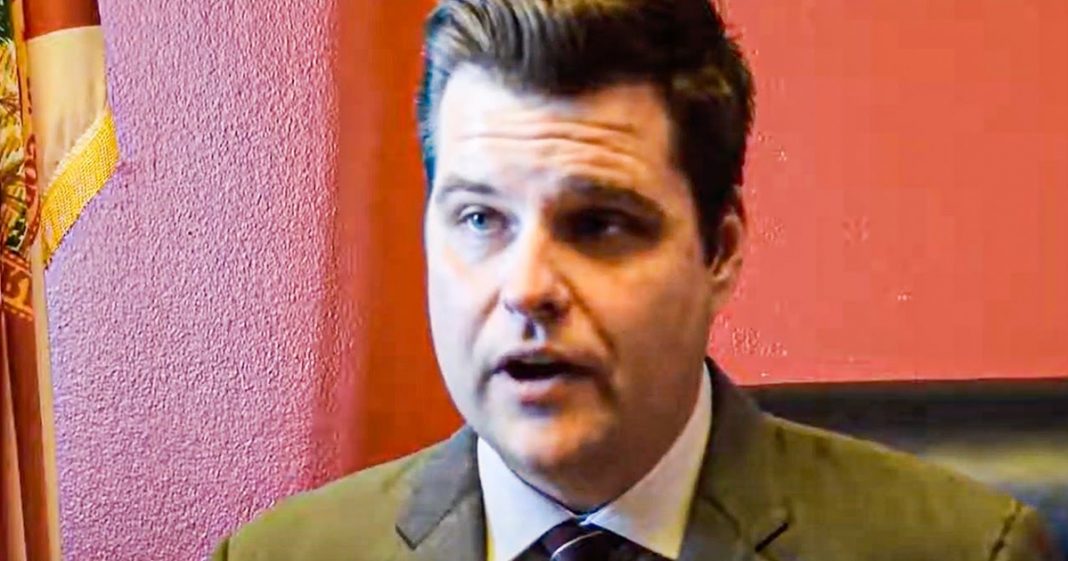 An ex-girlfriend of Congressman Matt Gaetz has agreed to flip on him and work with the investigators looking into some serious potential criminal activity on Gaetz’s part. This former girlfriend is just the latest in a long line of informants that are now working against Gaetz and others, and it shows that there is little chance that Gaetz walks away from this whole thing unscathed. Ring of Fire’s Farron Cousins discusses this.

Late last week, news broke that a former girlfriend of Matt Gaetz, who also happened to be a former intern on Capitol hill, not for Matt Gaetz, but for different people, has agreed to work with investigators. And yes, she is going to be cooperating against her form, former boyfriend, Matt Gaetz. She is now that we know of the third person that is actively working against Matt Gaetz. So we have the ex-girlfriend. We of course have Joel Greenberg. And then we actually have another person who is working against Matt Gaetz with authorities who has been questioned by the way about Matt Gaetz’s possible conflicts of interest in pushing Florida’s medical marijuana law. So this thing goes beyond just inappropriate relationships with women, including some women who were minors. This thing is all encompassing and it apparently seems to be all encompassing Matt Gaetz, because I don’t know if you followed that other part of the story.

I know we haven’t spent really any time I think talking about it here on Ring of Fire, but Matt Gaetz was pushing medical marijuana here in the state of Florida, had a lot of his buddies, you know, had a lot of money in the medical marijuana industry. Gaetz helped to push it and they think there could be some kind of kickbacks with this, some kind of conflict of interest. So that’s another thing that is being investigated. And yeah, there is a guy working with investigators who was a part of this giving information about Matt Gaetz. But back to the girlfriend, right, because that’s the thing everybody wants to know about. The question I have is what information would this young woman have? You know, she was a girlfriend. Okay. She, she wasn’t somebody that he was paying for that we know of. I wouldn’t think he would.

So I am a little confused to be honest as to why the ex-girlfriend would be involved, because I have to imagine, you know, the crimes he’s being investigated for at least the sex crimes part of it, would not have been taking place while the ex girlfriend was in the picture. I, I mean, you know, that, that’s just you’d think, but then again, if he does those kinds of things probably doesn’t care if he has a girlfriend or not, when he does. So I don’t know. Maybe she is also a part of the marijuana investigation, because maybe she was around during that time. Again, we don’t know. As much as we do know, by the way about this investigation, there’s still far more that we don’t know. Names aren’t being released. You’ll notice when I was talking about that other individual who had flipped on him with the marijuana investigation.

Yeah. Names aren’t being released. Okay. So there’s a lot more that we don’t know than we do know at this point. But one thing is for certain, this is all really, really, really horrible news for Matt Gaetz. This guy, I, I do not believe by any stretch of the imagination has a leg to stand on. He is done. He is absolutely done and he gets more and more done with each passing day. He is not going to walk away from this, especially not with as much as they’re looking into. This guy is going to get popped and he’s going to get popped hard and he’s going to get popped hard for a lot of different things. And if Republicans had any sense whatsoever, whatsoever, excuse me, they’d force him out of their party today.