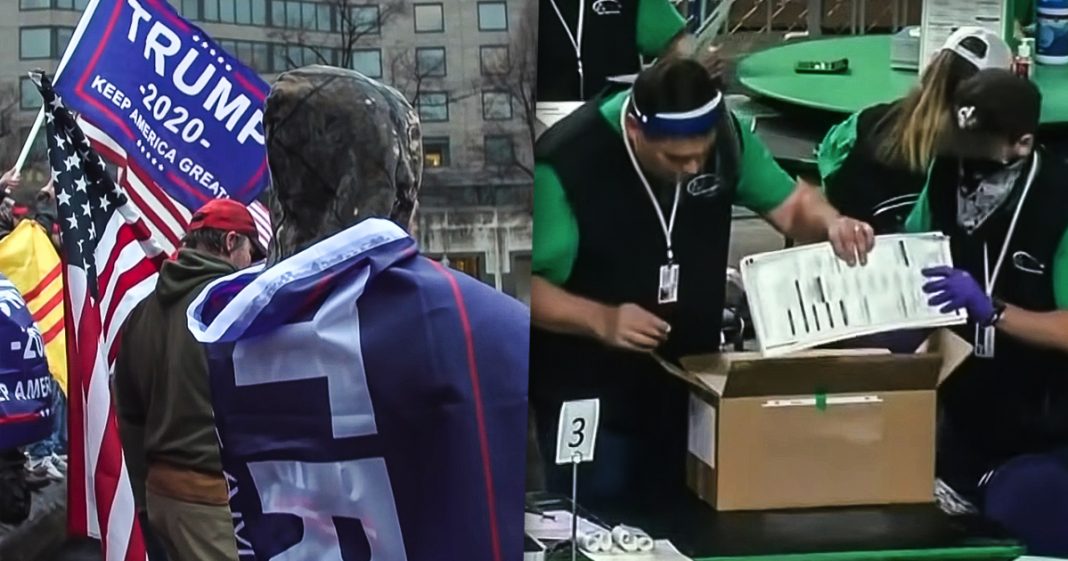 Trump loyalists are demanding ballot audits and recounts all over the country after watching what is taking place in Arizona. These sore losers are going to continue to refuse to believe that the election was legitimate, and they will spend the next few years trying to challenge every single county that is willing to entertain their delusions. Ring of Fire’s Farron Cousins discusses this.

Across the country, pro Trump forces are attempting to get counties to do basically what Arizona’s doing with Maricopa county and audit their ballots from the 2020 presidential election. Here we are six and a half months removed from that election. But because of what is happening in Arizona, inspired by what’s happening in Arizona, you have these pro Trump individuals hiring pro Trump lawyers, pushing for audits in counties in Michigan, New Hampshire, California, all over the country because these idiots can’t accept the fact that Donald Trump didn’t win the presidential election. You know, we had talked about, you know, long ago with this Arizona recount that this was going to become the norm. This would be the standard that Republicans would do anytime they lost an election. And honestly, Republicans openly fretted about the fact that Democrats may try to do the same thing in the future if they lose elections. But at the time we all thought this was going to take place, you know, in 2022.

We didn’t realize that these hats were going to come out in 2021 and say, well, hold up, let’s go back and re litigate the entire 2020 presidential election, county by county by county. This, this, this, this is madness. This madness has to stop. It is beyond time for the United States department of justice to step in here, tell these individuals that they are overstepping their bounds, that they’re violating the rights of these individuals by going back and re auditing with private companies these ballots, accessing their personal information, accessing their entire voting history, which is supposed to be private. Enough is enough. Enough is enough because if this continues, it’s going to continue. And I know that sounds like a weird thing to say, but if we allow this Trump cancer to spread like it is in Maricopa county, and now it’s spreading over to Michigan, spreading over to New Hampshire, spreading over to California, and then it’s going to continue to spread from there. That’s the Republican plan to continue to audit, recount, litigate, whatever they have to do just to make Donald Trump feel better. Hell maybe at this point, it’s to make themselves feel better for backing such a political loser.

But this is getting out of hand. It is clearly violating the rights of the people in these counties and it has to come to an end. The Arizona recount has yielded absolutely nothing of value that could even come close to changing any of the results in that election. The whole thing has been a giant waste of money. Cyber Ninjas, the company conducting the audit, has made out like bandits and that’s the only thing that’s happened. They’ve made a lot of money. Trump didn’t get any extra votes. It’s all been for nothing. It’s all a farce because it was a farce from the beginning. And that’s what would happen in these other counties. They’re going to bleed the county’s dry of money, forcing them to hire companies to audit their ballots. I am all for election security here in the United States. I absolutely believe that election security needs to be beefed up. I also remember when bipartisan coalitions in both the House and Senate attempted to get that done, but Mitch McConnell blocked it for four frigging years. So don’t come at me with the, oh, well, we go to protect our elections, bull crap. We tried that. Mitch McConnell blocked it, multiple times.