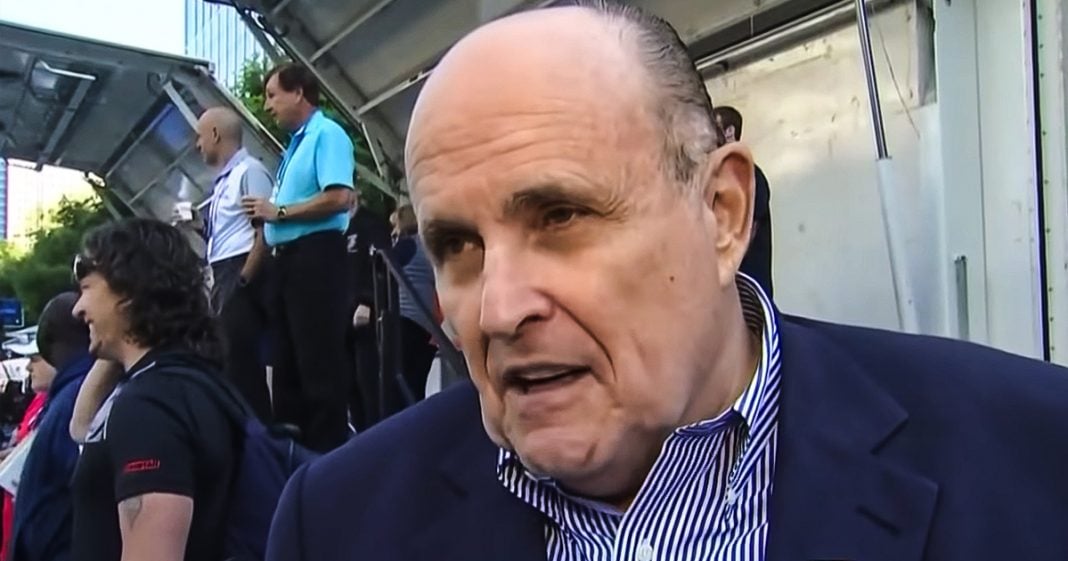 Rudy Giuliani sent his lawyers to court recently to give one of the dumbest legal arguments that we’ve seen in a long time. The lawyers argued in a filing that Giuliani deserves “better treatment” because he is a well-known lawyer with a high-profile client (meaning Donald Trump.) The “better treatment” that the lawyers are wanting is evidence against Giuliani thrown out because it is so damaging. Ring of Fire’s Farron Cousins explains what’s happening.

Recently, prosecutors in the Rudy Giuliani case had to explain why they sought a warrant to get access to Rudy Giuliani’s iCloud account. And the reason was because Rudy Giuliani on multiple different times had been seen holding multiple different cell phones. In fact, one of his bodyguards at one time, they were leaving a place. The bodyguard said, do you have all three phones? And Rudy said, yes, I have all three phones. Um, I need to whittle it down a bit. So maybe I’ll work on that tonight. So the prosecutors were worried that work on that getting rid of phones may mean deleting important evidence. So they got the warrant, they got the iCloud, Rudy can’t delete any data. But yeah, listen up, before I even get into the ridiculous legal defense that Giuliani’s lawyers tried to argue recently, let me, let me mention this.

No person with multiple different cell phones that they keep on them at all times is doing legitimate business. I am sorry, but can anybody out there provide any reason why average person, I don’t care if you’re a doctor, if you’re a lawyer, if, you know, whatever you are, if you’re a construction worker, if you’re a business owner, if you’re a CEO, if you’re a miner like the miner, miner, not like a minor. You don’t need multiple cell phones. You sure as hell don’t need three. I can understand to an extent some people having two, sure, sure. The business and the person. But a third and more. Yeah, at that point it’s like, okay, you’ve got a lot of burner phones and clearly you’re trying to hide some stuff. So anyway, after this explanation in court, they said, listen, this is why we had to do this. This is why we had to confiscate the phones. We got the warrants. We did it all on the level. What more do you want, defense lawyers? And the defense lawyers said, well, we want our lawyer to be treated better.

They said quote, they argued this in a 17 page document, that he’s a quote, distinguished lawyer with a well-known client, the former president of the United States and he should be treated better. Treated, treated better. How is he even being mistreated? They did everything by the book. They did everything they were supposed to do. They did it all legally. It’s not like they went in when they did the raids and like roughed him up a little bit. Like what the hell do you mean you want him treated better? No, what you want is you want evidence dismissed. That’s what you’re trying to do. Like, well, it’s unfair that you took his iCloud account. No, it’s not. When the dudes walking around with hands filled with cell phones and then talking about, I got to get rid of some of these. Yeah. You kind of have to do whatever you have to do in order to preserve that data because he was meeting with people, by the way, who are indicted now.

Like literally meeting with potential criminals, Lev Parnas and Igor Fruman. So yeah, you’ve gotta get your hands on that data. Folks, this is ridiculous. I don’t know who these lawyers are that Giuliani has hired, but my God, whatever you’re paying them is too much, Rudy. Of course, at the same time, perhaps in the defense of these defense lawyers, they have no defense. They understand how screwed he is and so they’re just trying to throw anything at the court to see if any of it makes a difference. Like, ah, objection, you can’t prosecute him because everybody knows who he is. He’s well-known. You can’t prosecute him because he represented Trump. Yeah, it’s not a legal argument. But when you don’t have a case, you kind of just start making stuff up to see if any of it works. And I think that is the point that Giuliani’s lawyers are at right now and I think their ridiculous little argument this week proves that.