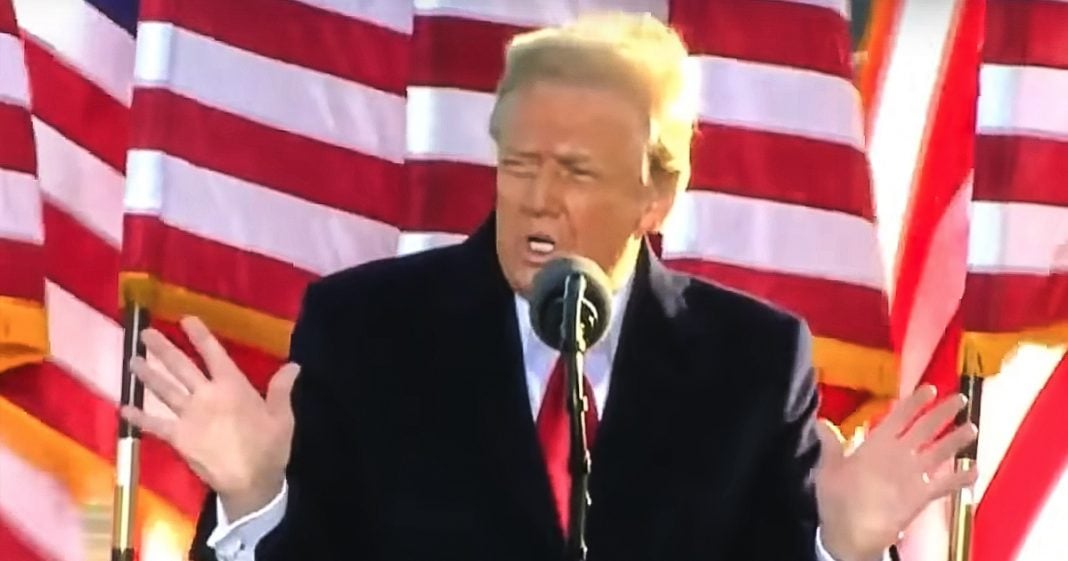 If you’ve always dreamed of being lied to in person by a former President, then good news – Trump is planning to resume rallies starting next month. This is likely his attempt to gauge the interest in making another run for office, but it also gives him a chance to get back into the headlines and to spread his ridiculous election lies that he won’t ever give up. Ring of Fire’s Farron Cousins explains what we can expect from these rallies.

The New York Post and the Daily Mail reported this week, that there are rumors in the Trump org that Donald Trump is about to start resuming his rallies, two in June and one at the beginning of July. So if you you’ve always dreamed of being lied to, to your face by a former president, then you may have your opportunity to do that this summer if Donald Trump does in fact hold these rallies that it’s being reported, they’re considering doing. Now, no firm dates have been set. Obviously the Trump group has not released any kind of statements on this. So it is all speculation, but this is something that Donald Trump promised he was going to continue doing. And of course now that COVID restrictions are being lifted prematurely across the country, then yeah, I’m sure you’re going to get a lot of people showing up at these rallies.

And if Donald Trump wants to run for president again in 2024 or ever, he has to go out there and he has to gauge people’s interest in him returning. And I think the reason that it’s reported, oh, they’re only going to do three, is because that is a gauge. That’s the barometer. You don’t want to go out there and announce this massive nationwide tour with 50 dates. No, you start small. You know, you gotta be like, you know, I’m just gonna do three. Because believe it or not, as much as you know we dislike Donald Trump and I’m sure the viewers dislike Donald Trump, he can hold three rallies and I guarantee you he could pack them out. He could get 10 to 20,000 people showing up at these things and that’s all he wants. Just give him a captive audience, give him an hour and a half, so he can whine about the election because that’s really all it’s going to be.

He’s going to whine about the socialist agenda of Joe Biden. And then he’s going to talk incessantly about the fact that, oh, it was stolen from me. I’m your rightful president. I’m your true president. Your real, your favorite president. Your, blah la la, all that crap. That’s what he’s going to do. This is, this is a whining tour for Donald Trump, that’s what it is and I guarantee you if he does hold these rallies, that is what he is going to talk about most of the time. Talk about how he was untreated, treated so unfairly. Talking about the ousting of Liz Cheney and everybody’s going to clap when he talks about Liz Cheney’s horrible. Yay, yay, we got rid of her. Um, so that’s what this would be. But, but more importantly, I think it’s the barometer. I think it’s him going out there trying to measure the responsiveness of the people and sure if you only hold three rallies, you’re going to get a lot of people.

You go beyond that, people are going to remember why they don’t like you. And that’s the flip side of this. If those first few rallies are successful, he’s going to continue. And the more he continues, the less interested people are going to become. He’s going to end up turning off more voters than he is attracting voters. And we know that actually, because that’s what happened in 2020, when he did his few rallies before the election, the areas where he did those rallies, his turnout actually decreased from 2016. So he did in fact turn more people off. But there’s a big, big number one reason why this is a possibility here. It’s not just because he wants to gauge receptiveness to a 2024 presidential bid. It’s not just to whine about losing the election. It’s because he has to get his name back in the headlines and nothing got people talking, whether it was in support of or in opposition to Donald Trump, than a Trump rally.

He’s guaranteed to say some stupid things that are going to off a lot of people and it’s going to be headlines for days and days and days. The clips are going to make their way through social media. Everybody’s going to be talking about Trump again, and that is what he wants more than anything. That’s the big one. That’s the big fish. But a word of caution. I mentioned this, you know, back, hell, while we were still trying to figure out who won the 2020 election and the days after that, I talked about the fact that if Trump continues his rallies once he leaves office, he is either going to have to pay for them himself. At which point he has to charge people to come in or risk losing a lot of money. And we know Trump won’t do that even for his ego. So that’s going to turn a lot of people off if they have to go that route. If he wants to use PAC money in order to do this, it has to be a legitimate political expense in support of a candidate or issue.

And if they do not do that, they risk running a foul of FEC, you know, election laws, campaign finance laws, excuse me. So, yeah, there’s a big legal liability here that could accompany these rallies. And if the legal liability isn’t there, then there’s a huge financial liability that’s going to fall onto Donald Trump. So no matter which way you slice it, these rallies are going to be a problem for Donald Trump because you do risk turning off more people. That’s going to happen. You either have to pay for it out of pocket and hope you can recoup the cost at the door, or you have to make sure you don’t get too off the rails or else you’re going to run a foul of campaign finance laws. But ultimately no matter which way you slice it, you’re still gonna end up with your name in the headlines. So I have no doubt that this is what Donald Trump will ultimately choose to do.