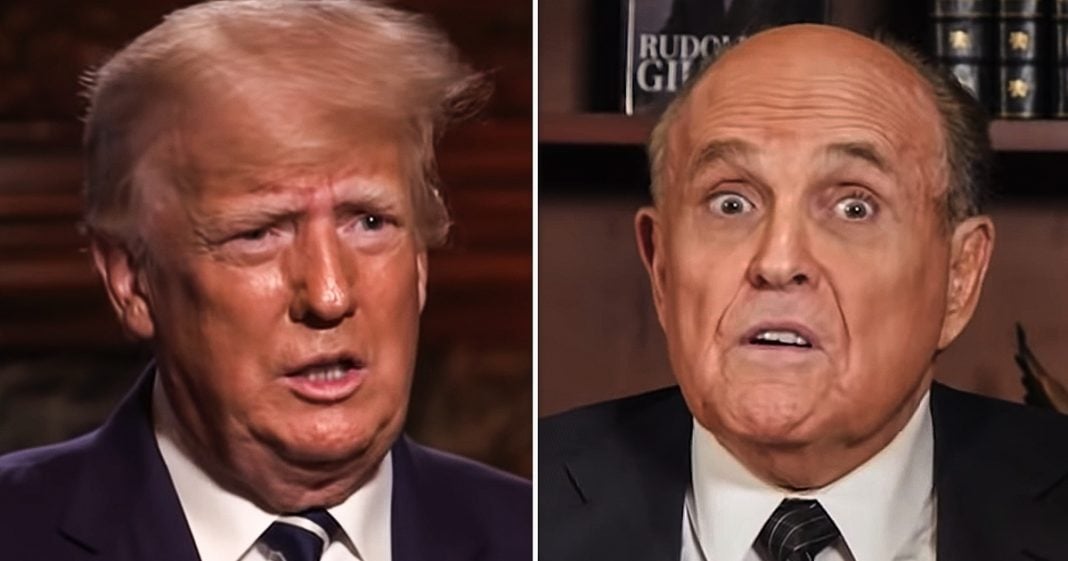 According to new reports from The Daily Beast, Rudy Giuliani is still begging Donald Trump to come to his rescue, but his pleas are falling on deaf ears. Trump is refusing to help Rudy, and those surrounding Trump are also advising him to stay as far away from this issue as possible because it could end up backfiring on him. Rudy is on his own, and he should have known that this is what you get when you try to work with Trump. Ring of Fire’s Farron Cousins explains why this should be used as a cautionary tale for the entire Republican Party.

Rudy Giuliani is still begging his good buddy, Donald Trump, to help him in all of the legal troubles, all the financial troubles that are coming with the legal troubles that the guy is facing in New York. And so far, Donald Trump has said nothing. Nothing at all. Donald Trump has not offered any assistance. Donald Trump hasn’t even made public comments, other than of course, the one on the day of the raid. But other than that, silence, nothing for his former lawyer, as he faces massive legal problems. And as the Daily Beast is reporting, that’s because those closest to Donald Trump are telling him don’t get involved. The Daily Beast recently reported that yes, Giuliani is still reaching out to Donald Trump, effectively begging for assistance of any kind, help bail him out, dude. But Trump’s advisors are telling the former president do not get involved in this. This guy is a liability. You don’t want your name attached to this.

He’s a bit of a nutter. So let it go. And for the first time ever, Donald Trump appears to be listening to advisors and Rudy Giuliani is not getting any help. And Rudy Giuliani could be facing some serious jail time and giving his, given his advanced age, that could result in basically what, what comes to a life sentence. Here’s the thing though. The only reason I’m even covering this story, because it’s really a non-story in the terms of the story that it’s about, what this story is really about is a cautionary tale for the Republican party. I hope every single Republican in the country reads this story or watches this video or sees some kind of variation of it because listen, listen, all you people who are putting all of your chips on to Donald Trump and saying he is the future of our party, unequivocally, this is what’s going to happen to you.

This. This is what’s going to happen to you. It happened to Rudy Giuliani. It happened to Michael Cohen. It happened to Michael Flynn and Flynn still hasn’t jumped off the Trump train yet. You will lose everything just like these Idiots did. And their biggest crime of all was thinking that Donald Trump would be there to bail them out when they got in trouble. It didn’t work for these people and it’s not gonna work for the Republican party as a whole. But y’all have made your choice. You made your choice with that vote against Liz Cheney. You said we’re the party of Trump. We’re going that way. Wonderful. Rudy Giuliani made that same choice at one point too. So did Michael Cohen. How’d that work out for them? Is Trump even taking their calls anymore? Nope. So best of luck with your new strategy. I hope it ends up just like it did for Giuliani and Cohen, because that is what the Republican party deserves.