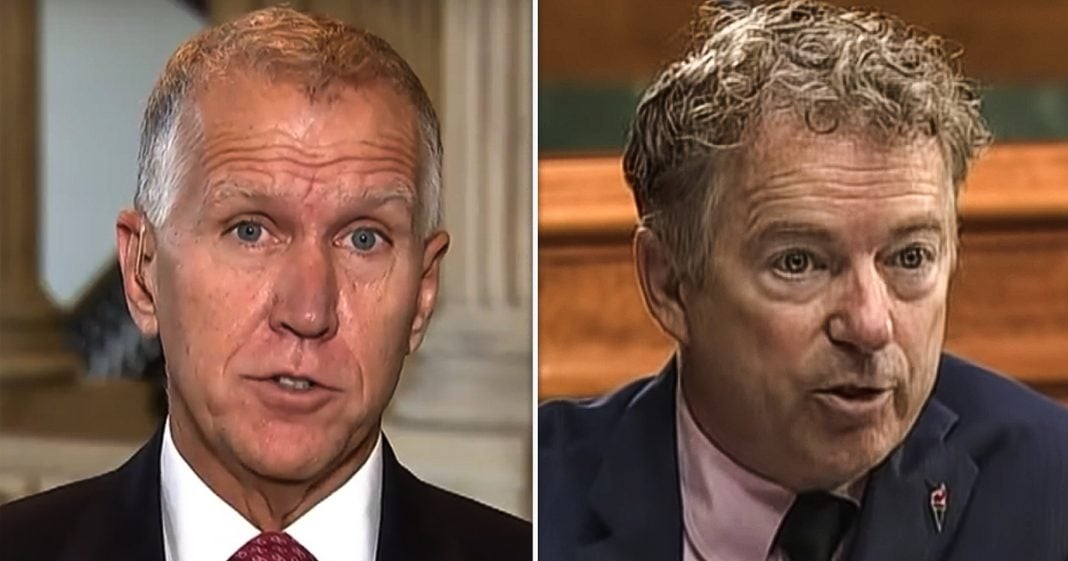 Republicans sent a warning to Democrats this week during infrastructure negotiations. The warning was that if Democrats raise taxes on wealthy Americans to pay for infrastructure, Republicans are just going to cut those taxes again the next time they gain power. The funny thing about this is that Republicans don’t even have a reason for doing this anymore, and they aren’t even trying to pretend that one exists. Ring of Fire’s Farron Cousins discusses this.

Republicans this week issued a warning to Democrats and that warning was this. If you raise taxes on the wealthy and on corporations here in the United States in order to pay for that much needed infrastructure package, then you better know that the next time we get power, we’re cutting those taxes again. Thom Tillis and Rand Paul led the chorus of Republicans who said, we’re just going to cut the taxes if you raise them again to pay for infrastructure. Now, here’s what’s funny about this. You have a majority of Republicans in this country who say that the wealthy and that corporations do not pay their fair share in taxes. You have a majority of Republicans who support the infrastructure package, including the tax increases on the wealthy elite. They support them. They like them. They’re good with that. And of course obviously so are a majority of independents and Democrats. But here we have these Republicans in the Senate who are so afraid of corporations and wealthy having to pay a little bit more in taxes, which would still be well below what they were paying prior to the 2017 tax cuts.

So these Republicans are already out there saying the only thing they know how to say and that is, we’re going to cut taxes on the wealthy because that’s the only thing Republicans have been saying for 40 friggin years. That is the only actual policy position Republicans have had. Anytime a crisis comes up, well, what do we do? Let’s cut taxes for the wealthy. Okay, but we’re in a recession. Cut taxes for the wealthy. What do we do about healthcare? Remember the little healthcare bill they were drafting during Trump’s first years? It turned out to be nothing more than a series of tax cuts for corporations. What did they throw into the stimulus package that they actually voted for last year? A bunch of tax cuts for corporations. That’s all they know how to do and the public isn’t buying the trickle-down BS anymore. They understand that this isn’t true. That trickle down doesn’t work.

They know that now, even Republicans do. You have almost 50% of Republicans that have said, yes, trickle-down does not work in recent polling. But Republicans have totally dropped the veil. They’re not even pretending that there’s a reason, like, any kind of real economic reason why we need to cut taxes on these individuals. They’re not even trying to pretend that anymore. They’re just saying we just got to cut their taxes. They’re not saying why. They’re not saying how that benefits anybody other than the people having their taxes cut. They’re just saying we got to do it. This is insane. And these people need to get their head checked because there is no reason on this planet why the wealthy would need their taxes cut again. So even if we raise them slightly to help pay for much needed infrastructure projects here in the United States, the public’s totally cool with it. But Republicans are not because the only thing they know how to do is cut taxes for the wealthy. And they’re already literally telling us this week that if we put them back in power, that’s the only thing they’re going to do.