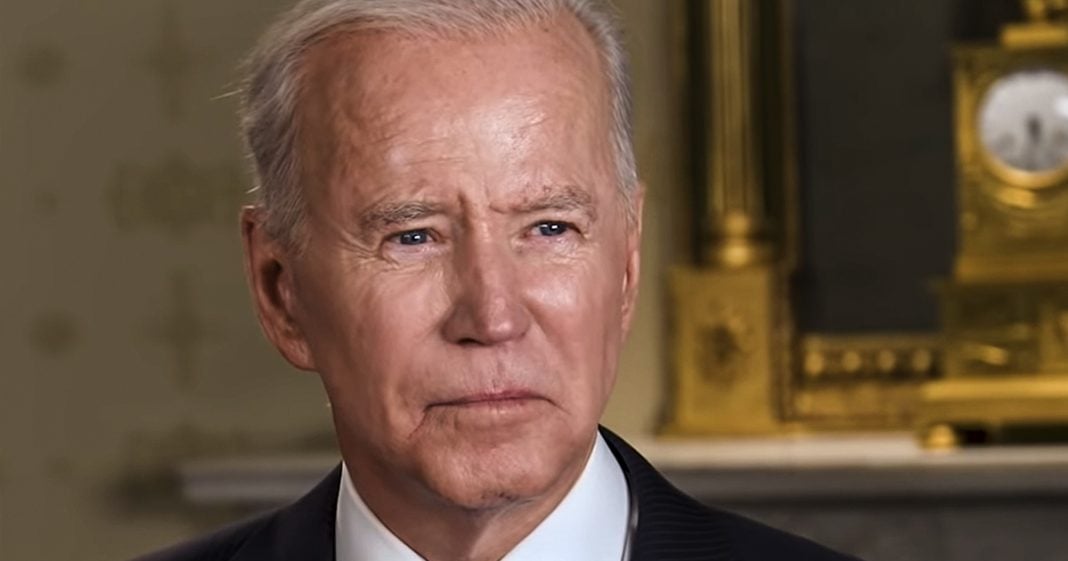 The Republican Party has another serious problem on their hands – their base isn’t getting angry at Joe Biden. They might have an undeserved dislike of him, but he isn’t getting them angry or riled up about anything. If the Republican base isn’t fired up, they are going to be less enthused about showing up in the midterm elections, and that thought has Republicans in a full-blown panic right now. Ring of Fire’s Farron Cousins explains what’s happening.

A recent report from Politico shows that Republican strategists are not happy with Joe Biden. And the reason they’re not happy with Joe Biden is because they don’t have a whole hell of a lot of reasons to be not happy with Joe Biden. It turns out the biggest problem Republican strategists and Republican campaigners are having with Biden is that he’s not them off. And more importantly, he’s not off the Republican base. It’s hard to get your base riled up, it’s hard to get them to want to change course, if they’re not rabid In their hatred of whatever Democrat the Republicans put in front of them. They hated Hillary Clinton. They hated Barack Obama. And then comes along this old, you know, senile looking white guy and they’re like, ah, I mean, we don’t really hate him. Yeah. I Wonder what the difference is.

But anyway, Republicans just can’t seem to get their base to hate Joe Biden. And we’ve seen that in other polls too, by the way, it’s not just these Republican strategists saying we’re struggling with our midterm messaging because our base doesn’t hate the guy. They also are running into problems because Joe Biden’s policies that he has proposed are very popular among Republican voters. Most of them are supported by a majority of Republicans. They like the idea of raising taxes on the wealthy and on corporations. They want this infrastructure bill. They wanted the stimulus package. Believe it or not, a lot of them are actually in favor of the green new deal once it’s actually explained to them. None of the hits that people like Fox news or Newsmax have tried to land on Joe Biden, none of those hits have stuck. None of the hits that Ted Cruz and Josh Hawley have launched against Biden have stuck.

The Republican party has absolutely nothing. They don’t know what they’re doing. They don’t know how to fight this guy because either their base likes what he’s doing or in some instances he’s doing things that the Republican lawmakers actually would do. You know, he’s, he’s been very conservative on the immigration issue. He’s been very conservative on foreign policy. So they have nothing to complain about. But don’t worry, don’t worry they say. They’ve got a strategy. They know how they’re going to get people off at Joe Biden and they actually admitted it to Politico, which I think is rather stupid. They said, what they’re going to do is they’re going to tie Joe Biden, not just tie him by the way, but say that he is the puppet of people that Republicans hate. So they’re just going to switch villains and say, hey, I know you hate this person, but this person’s really pulling the strings. It’s not Joe Biden who you don’t hate. It’s people like Bernie Sanders and Alexandria Ocasio-Cortez.

Those are the two specific boogiemen that they’ve mentioned in this Politico piece, the Republican strategists did. They said, okay, you don’t hate Biden. Well, what if I were to tell you that AOC is secretly the president pulling the strings on Joe Biden? How about that? How about If I told you it was Bernie Sanders pulling the strings, then what are you going to freak out? You going to run to the polls and vote for whatever Republican is on the ballot in the midterms? Are you that dumb people, really? Because that’s honestly the question I have at this point. If you think Bernie Sanders or AOC is pulling the strings on Joe Biden, then your too dumb to be allowed to vote in the United States. I’m sorry, I don’t make the rules, but that’s the way it should be. Joe Biden is not some kind of secret socialist. I wish he were. That would be awesome. Joe Biden is not pursuing the most aggressive, progressive agenda since FDR. That’s bull crap.

He’s done some pretty good things. He’s done some pretty bad things and I’m pretty sure that’s how the next four years are going to play out. Nobody’s pulling the strings from behind the scenes. At least nobody that would, we would want pulling the strings from behind the scenes. Those people are basically being shut out. But he is responding to public pressure in some areas. So that’s what we’re seeing. Good luck with your idiotic plan Republicans. I’m sure you’ll find a good boogeyman that’s going to your base off. The question is, after lying to them to their faces for so many years, will they continue to buy it? And I hope the answer to that is no.