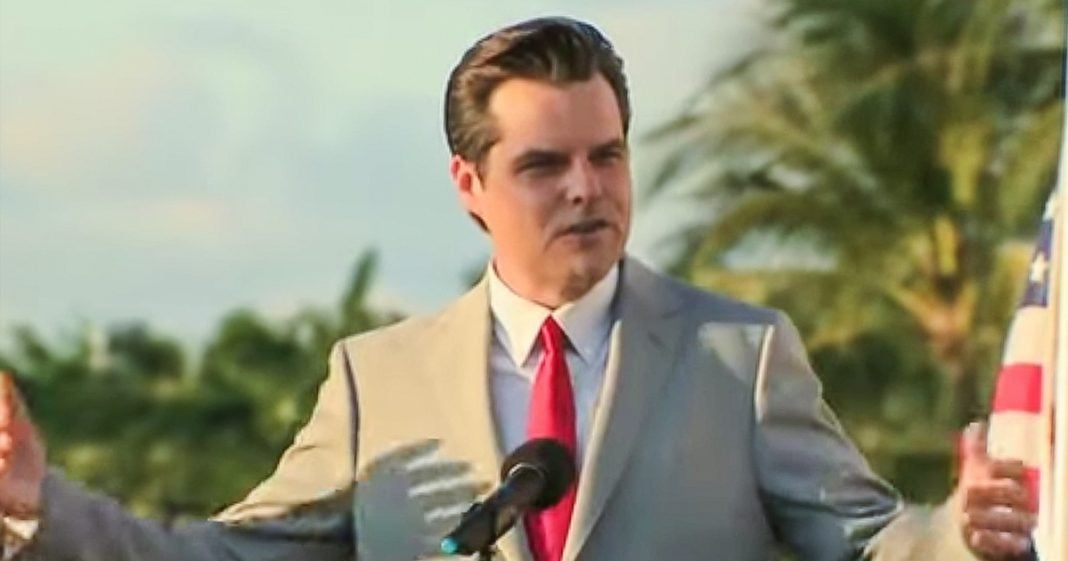 Via America’s Lawyer: The clock is ticking for FL representative Matt Gaetz, who has been directly implicated in sex trafficking and soliciting sex from at least one underage girl. Now his associate Joel Greenberg is pleading guilty, meaning it’s only a matter of time before the congressman must face justice. Filling in for Mike Papantonio this week, Farron Cousins gives us an update on the Matt Gaetz scandal.

Farron Cousins:                  The past week has given us a lot of new developments in the Matt Gaetz saga. But the biggest came on Monday of this week when Gaetz’s former associate Joel Greenberg updated his plea from not guilty to guilty.

Farron Cousins:                  Greenberg of course, is the South Florida politician that had been indicted on 33 different counts, including human trafficking, but his new plea had him plead guilty to only six charges. So this reduction in the number of charges that he’s willing to admit to committing is a strong indication that Greenberg has agreed to a plea deal with prosecutors who are likely dropping some of the lesser charges in exchange for his cooperation. On Monday news broke that the new deal includes Greenberg implicating quote, multiple men in criminal activities that Greenberg was also involved in, though the names of these men have not yet been released. And while it’s easy to speculate that Matt Gaetz is one of them, I mean, after all Greenberg admitted in a confession letter to Roger Stone, that Gaetz had sex with an underage girl, we won’t know for certain until charges are actually filed.

And that’s another thing that we have to keep in mind here. At this point, Gaetz has not yet been charged. In fact, many had even speculated that Gaetz was merely mentioned in the investigation from the department of justice. And that could mean that he isn’t even a target. However, evidence from the past week strongly refutes those claims because in addition to the change of plea from Greenberg, it was also revealed last week that investigators were attempting to convince both Greenberg and a woman who was a former Capitol Hill intern and ex girlfriend of Matt Gaetz, to flip on the congressmen. The fact that investigators are actively working to get information on Gaetz from those who knew him best is a very strong indication that the Congressman is a target in the DOJ investigation, but that’s actually not even all that we learned this past week, either.

A report from the Daily Beast revealed that Gaetz allegedly attended drug fueled sex parties with a woman who was being paid by Greenberg for sexual favors though, at this point, it’s unclear if this was one of the women who Gaetz was involved with, although witnesses say that the two were always very close to one another, when they saw them together. On top of that, they were also more Venmo receipts showing Gaetz and Greenberg paying all sorts of items that are certainly questionable at best and likely even illegal. Now, Gaetz has attempted to downplay this new report over the weekend by trying to claim that he never paid for any naughty favors as he called them. But he then went on to give an excuse that former federal prosecutor and legal analyst Glenn Kirchner said amounted to an emission. Gaetz said that the real criminals are the ones in Congress who take money from lobbyists, for earmarks and other legislation.

You know, it’s never a smart move to try and deflect from your own legal problems by saying that other people have committed worse crimes, because yes, it makes it look like you’re guilty too. Now, Mike Papantonio, and I have covered this story extensively on this program and so far all the predictions that we’ve made have come true. So let’s take time now to revisit the most recent conversation that we had about this topic.

Farron Cousins:                  Again, Gaetz has not been hit with any charges yet, and he’s still parading around the country on his speaking tour acting as if none of this matters. But if Greenberg has beans to spill, he’s going to start spilling soon and that’s the big takeaway from all the stories of the past week. At this point, Greenberg has no choice but to cooperate with prosecutors and deliver any evidence that he has or else he runs the risk of being hit with even more charges and having whatever plea deal he has arranged revoked. Gaetz might want to invest in a good defense lawyer because Greenberg’s plea deal is an exceptionally big deal.