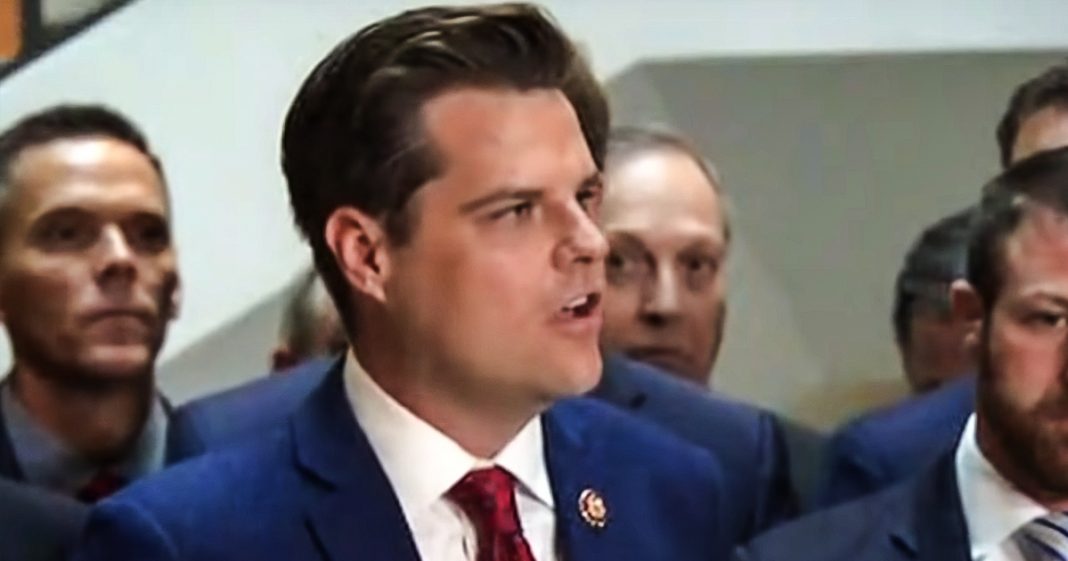 Matt Gaetz’s name is mentioned in subpoenas that have been issued for other individuals in Florida, and the subpoenas were seeking the communications that these people had with Gaetz. This means that Gaetz is officially one of the targets of the investigation, and investigators are trying to get everyone else that is tied with Gaetz. There is no positive outcome for Gaetz at this point, and lawmakers need to be calling for his resignation immediately. Ring of Fire’s Farron Cousins discusses this.

Politico has reported that a subpoena actually issued all the way back in December of 2020, specifically named several individuals involved in the Matt Gaetz drama. One of them, of course, being Matt Gaetz, who is mentioned in this subpoena. Another being Joel Gren, Greenberg and then there are now two previously unnamed individuals that are also clearly targets. One of them was a man by the name of Gig Joe Ellicott, who worked with Greenberg. They’re seeking information from him. The other one, was Halsey Beshears, a former state House member who served with Gaetz in the state legislature. So what could these two individuals possibly have that investigators would, would want, why are these two people listed? Well, it turns out they want any communications that these two individuals may have had with either Joel Greenberg or Matt Gaetz.

Now, if you don’t think that that is a big deal, let me explain to you why it’s a big Deal. This proves beyond a shadow of a doubt that Matt Gaetz is in fact, the target of this investigation and has been since at least December back when Donald Trump’s DOJ was running the show. They want more information on Matt Gaetz and they have been subpoenaing this information, communications, electronic devices, whatever it is, any, any interaction you had with Matt Gaetz. That’s what these subpoenas were about. So Matt Gaetz can no longer claim that he is not a target in this investigation. He is clearly a target. At this point, I believe he is the target. Greenberg’s flipped on him. They’re trying to get the ex-girlfriend to flip on him. They’ve been gathering information about Matt Gaetz’s communications from other people that he knows all throughout the state of Florida.

The guy is toast. He is toast. At this point, any politician not calling for Matt Gaetz to resign is failing to do their job properly. The allegations are there. The receipts are there. And we have seen plenty of members of Congress, the House and the Senate, resign over far less than what Matt Gaetz has been accused of. Al Franken comes to mind. And I think it’s time for all members, both parties, to start calling on Matt Gaetz and demanding that he resigned from Congress. He’s not going to do it, but there needs to be a united front. The Republicans have clearly said, you know, we don’t want to do anything until charges are filed. Well, guess what, charges are coming. Matt Gaetz cannot escape that. So the longer you hold this, you know, guy, I gotta be careful what words I use there. That’s why I kind of paused.

But the longer you hold this guy in your party, you hold him close to your heart, you let him travel this country with Marjorie Taylor Greene, spewing nonsense and hatred towards other Republicans. He’s killing your party. I’m okay with that. Don’t get me wrong. You deserve it. But I would think if I were Kevin McCarthy, I would look at this, look at the damage he’s doing. See the writing on the wall with these subpoenas and all of the other evidence that has come out and say, you know what, Matt Gaetz get the hell outta here. You’re going to cost us elections. You might even cost us the midterms. Charges will be coming against Matt Gaetz, I have no doubt in my mind now. After reading through these subpoenas and seeing the information, not just seeing what information they wanted, but who they wanted it about and it was Matt Gaetz. He’s done. No doubt in my mind.