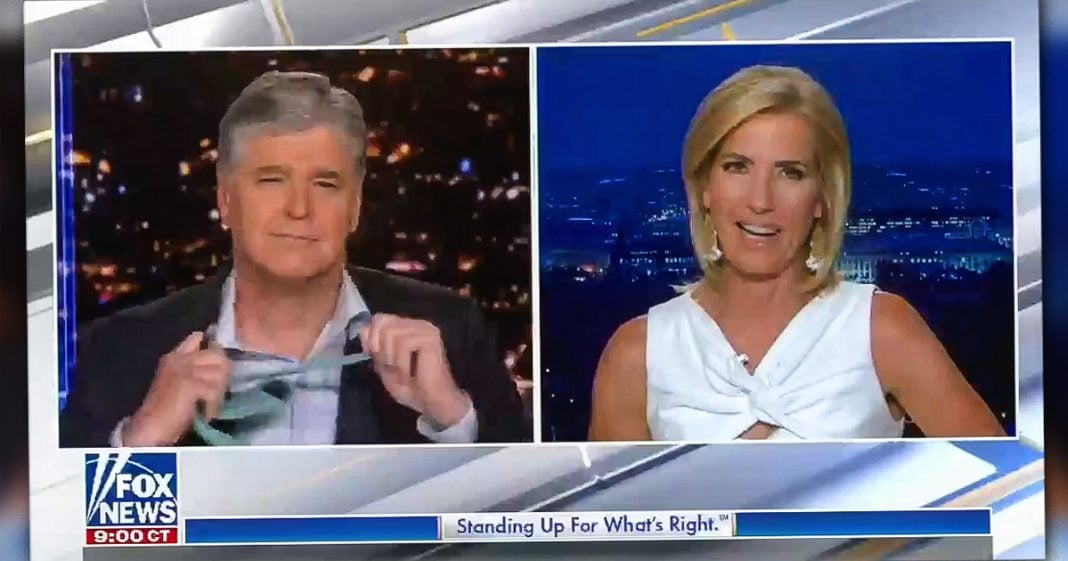 During a truly bizarre toss to Laura Ingraham’s program from his own, Fox News host Sean Hannity started whining about “woke America” after Ingraham suggested that he was doing a strip tease by taking off his tie. The entire exchange was awkward and cringeworthy, but it also gave us a little insight into the depraved minds of the Fox hosts. Ring of Fire’s Farron Cousins discusses this.

Sean Hannity and Laura Ingraham earlier this week, had a bit of a handoff, you know, Hannity’s show was ending. So he tosses it over to Laura Ingram. And then the two, I guess, started flirting a little bit. It looked like actually Laura Ingraham initiated the flirting and then, well, I’ll just let the clip speak for itself. Here it is.

Laura Ingraham:                All right, Hannity. I’m glad you have your tie on. I thought you were going to wear like one of those, you know, really narrow. Is this going to be a strip tease every night? This is a shameless way out.

Yes, woke America is the problem you have there, Sean. Woke America is really everything that’s wrong with everything. Not the fact that you two, supposedly professionals, are sitting there you’re taking your tie off. She’s asking if you’re doing a strip tease, then you’re both like, I don’t give a what HR says. Like you, you two are just absolutely off the rails. Look, I don’t care, I don’t care if you’re flirting with each other on the air. Honestly, I wouldn’t care if Sean Hannity did a strip tease on the air. That’s not going to offend me in any way. But what’s funny and honestly, it’s not going to offend most people except maybe, you know, hurt their eyes for a little bit. What’s funny is that they think everything off the so-called woke part of America. That’s not what that is. But they have to pretend that it is, that you can’t say anything, that you can’t do anything, that you can’t awkwardly flirt with your coworker on the air.

You know, when it’s clearly reciprocal, by the way. Again, I think Ingraham initiated that, you know, she seemed more interested in Hannity than he seemed in her. And again, no harm, no foul, right? But Hannity wants to make it seem that way. Hannity wants to make it seem like in woke America, run by these liberals, you can’t have friendly conversations. You can’t joke around about things at all. Woke America has destroyed all that. No, actually, Sean, what you were doing there was, was pretty much okay. And we don’t have a problem with it. You looked like an idiot, but you know, that kind of gives bonus points to you there because that makes us not care about it even more. But stop whining about woke America just because you can’t go out there and harass your coworkers anymore. That’s where it becomes a problem.

Don’t complain about woke America because you can’t use racist or derogatory terms anymore because they’ve fallen out of fashion. That’s what the wokeness is really about. Getting people all on the same level. Stop using hateful and hurtful language to describe individuals that are different from you. That’s all we’re asking. Stop harassing people at work. We’re asking for that as well. Those are, those are very, very, very minimal demands. But in order to keep your audience riled up, you’ve got to make them think that you can’t do any of that weird crap you were just doing in that segment. This is ridiculous. But honestly, driving the ridiculous is the only reason that anybody in this country even knows who Sean Hannity is.