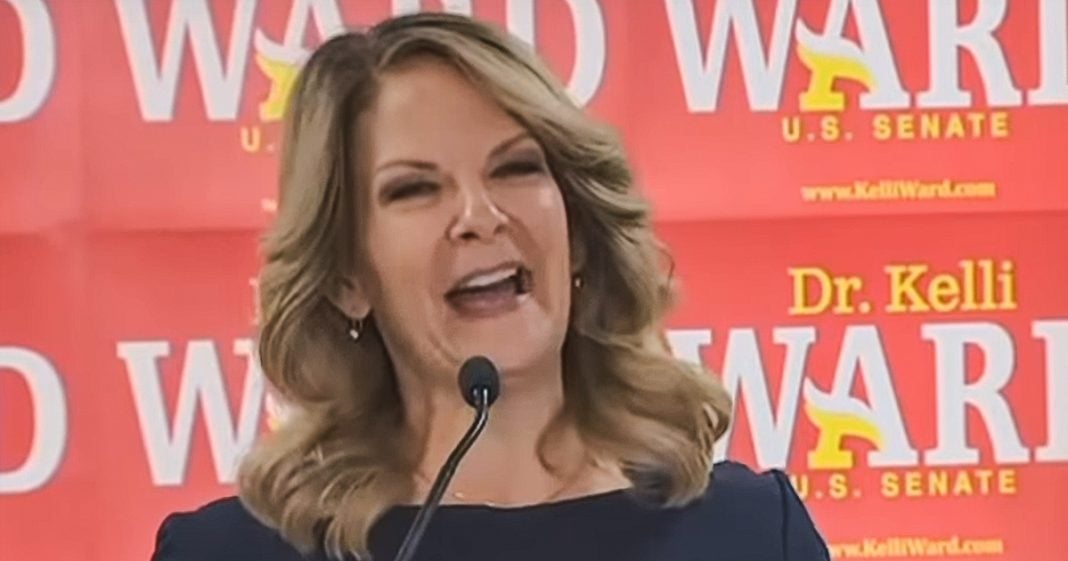 The ballot audit taking place in Arizona is getting even crazier by the day, and now the Chair of the state Republican Party is threatening to arrest other Republican officials who don’t give in to the demands of the auditors. This has been going on for weeks and nothing has been found to indicate that there was any funny business with the election, and this entire charade needs to be put to bed. Ring of Fire’s Farron Cousins discusses this.

The ballot audit taking place in the state of Arizona is getting more and more bonkers every single day. And we now have state GOP chair, Kelli Ward, actually calling for the arrest of Republican officials in Maricopa county, the one county they’re auditing ballots from, calling for the arrest of these Republican officials if they do not comply with every single request that the auditor’s, the people at cyber ninja, that they make. And we do know, by the way, that cyber ninja has asked for access to literally every computer database that Maricopa county has. They asked the police departments for access to the police records too. Like these people want to get in there and get everything that’s not even related, by the way, to the ballots. Still no word, by the way, on whether or not they found any bamboo particles on them. Because as we know last week, it was, oh, we’re looking for bamboo because we think ballots were shipped in from Asia.

And that’s how you tell, right? If there’s bamboo on it, it’s clearly something that came from Asia because stereotypes are all Republicans have. But yeah, this is chaos folks. You have the leader of the state Republican party telling other Republicans I’m going to have you arrested, even though you don’t have that authority, Kelli Ward, you moron. I’m going to have you arrested if you don’t comply with these outrageous demands by a company that has no business even doing the ballot audits. This is pure insanity and it has to stop. And you see these Republicans in Congress, Matt Gaetz actually leading the charge on that, you know, big distraction for him to be able to do this. Calling on the DOJ, to better not interfere with what’s happening in Arizona. This is a, we’ve got to make sure our election processes is, is preserved and protected. Yeah, you protect it by stopping this charade. That’s how you protect it, you idiots. What’s taking place in Arizona is absolutely unconstitutional.

They had the recounts, they already did their audits back, you know, when the election was still being determined, we all know those of us living in reality that this election was not stolen. It wasn’t. But these Republicans continue to push it because they’re trying to massage Trump’s ego. This is dangerous and it’s likely illegal at this point. And Kelli Ward threatening anybody with arrest, Kelli’s the one that needs to be threatened with arrest because this thing is getting absolutely out of control. These morons don’t even know what they’re doing. And by the way, this has also been going on for weeks and weeks and weeks now. So what the hell? What have you found, anything at all? Or can we all go ahead and admit that this was a giant waste time and that Donald Trump has been lying to the public for seven months about the election. It’s time to move on. It’s time to stop the charade and it’s time to stop pretending that Donald Trump didn’t get his kicked in the 2020 election.