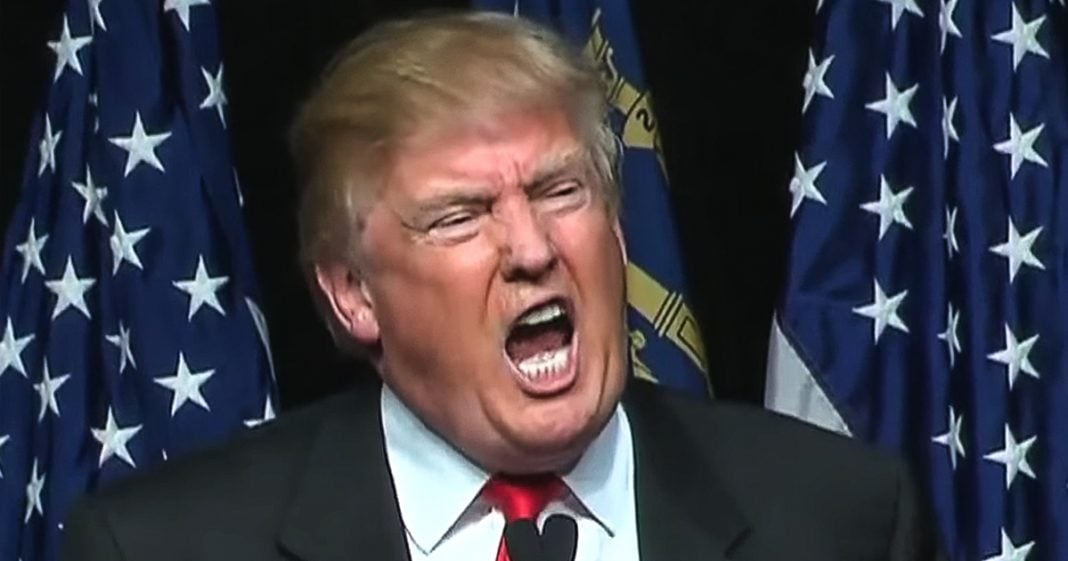 Donald Trump finally spoke out about the investigation in New York, and his words sounded eerily familiar. He talked about being the victim of a witch hunt; He went over all of his so-called accomplishments while he was in the White House; Then he tried to flip it and tell his supporters that this was really an attack on them. Trump is always the victim of an unjust system in his own mind, and that is exactly how he has responded to every investigation that he’s been involved with. Ring of Fire’s Farron Cousins discusses this.

Donald Trump is not happy and I’m sure that comes as a surprise to absolutely no one because apparently Donald Trump has never been happy throughout his entire life. But what’s him off right now is the fact that the New York attorney general Letitia James has joined into the criminal probe of Donald Trump taking place in New York. And on Wednesday he issued one of his ridiculous statements and this is what he had to say. I have built a great company, employed thousands of people and all I do is get unfairly attacked and abused by a corrupt political system. It would be so wonderful if the effort used against president Donald J. Trump who lowered taxes and regulations, rebuilt our military, took care of veterans, created space force, fixed our border, produced our vaccine in record-setting time, yada yada yada, would be focused on the evermore dangerous sidewalks and streets of New York.

Yes, because that’s where the real danger is in New York. You know, you don’t see anybody walking down the streets or on the sidewalks anymore in New York. Unless of course you look on the streets and sidewalks, where there are plenty of people walking around, not engaging in crime or being the victims of crime. But Donald Trump is trying to deflect away from the situation. That’s what this is. He understands that the walls are closing in on him now and there’s not a whole heck of a lot he can do except sit back and worry. So he’s trying to go out there, convince his supporters that, hey, listen, I was a great guy. I was a great president. You weren’t. And so they’re coming after me. They want me to pay a political price. I am nothing more than the victim of yet another witch hunt. And of course, one of the last times we saw him freaking out like this was with regards to the insurrection. And then prior to that, it was, you know, with regards to the pandemic response.

And then of course, before that it was the Ukraine scandal. And then of course, before that it was the Mueller investigation. But it’s always the same. Like he has the same set of talking points that he pulls out every time he’s facing some kind of legal problem and it’s like playing Trump’s greatest hits. Right? Witch hunt. I’m great. They’re after me, but more importantly they’re after you, they want to silence you because he continued his ridiculous statement saying this. That is what these investigations are all about, a continuation of the greatest political witch hunt in the history of the United States. Working in conjunction with Washington, these Democrats want to silence and cancel millions of voters because they don’t want Trump to run again. As people are being killed on the sidewalks of New York at an unprecedented rate. Like, what the hell are you talking about? Have you not been to New York recently? For the love of God. But there it is folks. There it is like, they’re trying not to cancel just me. They’re canceling you, my loyal voters. You’re All I have left. You’re my last line of defense. You’re the ones that they’re trying to really go after by going after me, your Messiah.

That’s the message that Donald Trump is trying to send to his supporters. Kind of like the same message he sent to them prior to the events of January 6th. That, that’s what we’re looking at here. He wants them to get mad. He wants them to go out into the streets and protest this, or God knows what else. That’s what this is all about. But there’s not much he can do at this point. Given the investigation, given the materials that they have, given the witnesses that they have interviewed, it’s likely somebody’s flipped. And that’s probably why the New York attorney general decided to get involved with the criminal aspect and not just with the civil. So there you have it. We’re going to see a lot more freak outs like this in the coming weeks and months. That’s just a given. As the walls continue to close in Donald Trump is going to become more desperate and more panicked. And this attack that he leveled on Wednesday is going to look mild in comparison to what’s probably coming from him.