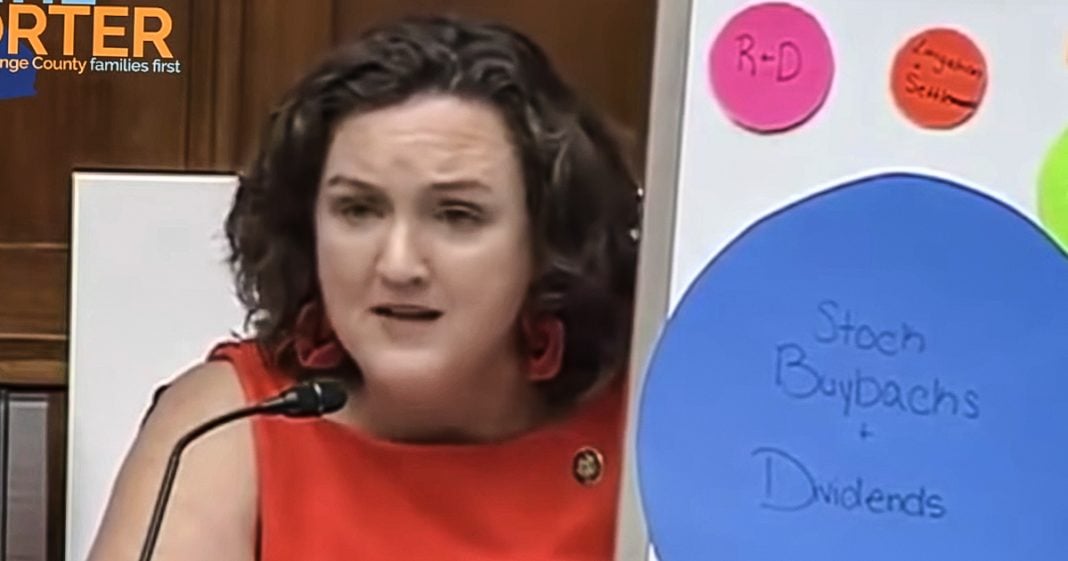 Democratic Representative Katie Porter absolutely annihilated the CEO of drug company AbbVie during hearings in the House this week, when she showed him how much his company is really spending on research and development compared to what they spend on marketing. She then called him a liar, and it was refreshing to hear someone with actual authority take down one of the most corrupt industries in this country. Ring of Fire’s Farron Cousins discusses this.

During a powerful line of questioning in a House hearing this week, democratic representative from California Katie Porter, absolutely demolished AbbVie CEO Richard Gonzalez, and flat out called him a liar. She said you’re lying. So what happened? Okay. Richard Gonzalez, trying to explain a way the cost increases that AbbVie has put on some of their most popular drugs, including Humira, which if you turn on your TV, you’re probably going to see a Humira advertisement within 30 minutes. They increased the price over the last few years by 470% with 27 different individual price hikes on the drug. And so Katie Porter with her famous white board of truth asked him why they did this. And he said, well, you know, the cost of R and D is astronomical. So Katie Porter said this. She said, so Mr. Gonzalez, you’re spending all this money to make sure you make money rather than spending money to invest in, develop drugs and help patients with affordable life-saving drugs.

You lie to patients when you charge them twice as much for an unimproved drug and then you lie to policy makers when you tell us that R and D justifies those price increases, and she did this because she pointed out that here’s what it is. The company spent $2.45 billion on research and development between 2013 and 2018, while it spent $4.7 billion on marketing and advertising and $50 billion on stock buybacks and dividends. So twice as much on marketing than research and development. And then, what would that be a, God $50 billion on stock buybacks, two and a half billion on R and D, $50 billion buying back shares of your own company, just to put more money in your own pocket. There is no excuse for these price increases. So yes, Katie Porter is right. Gonzalez was sitting there lying to her face and lying to the face of everybody else in that room about why they increased the price of this drug 470% through 27 different price hikes over the last five years. There is no excuse for this. There is no reasoning for it.

And I always tell this story when we talk about these price hikes. Mike Papantonio was over in Amsterdam, giving a deposition or conducting a deposition really, of a pharmaceutical executive selling drugs in the United States and abroad. And after he finished grilling this guy, and I’ve watched the video, it is wonderful to see Pap at work as a, you know, doing what he does best. It’s amazing. But anyway, he asked the guy, one more question real quick. I want to know why you charge Americans whatever X percentage more than you charge over here. And the guy simply said, well, it’s because we can over there. There’s no controls. We can, we can do whatever we want. And that’s what’s happening here. That’s what’s happening at all of these drug companies. They charge these astronomical prices simply because they can. Not because they need to. Not because the market says they should. Not because their costs of R and D are going up. They’re doing it because they can. And all of these price hikes on American pharmaceuticals really kicked into overdrive when we got rid of the rule saying, you couldn’t advertise pharmaceuticals on television. One of only two countries, by the way, that even allows that to happen.

So yeah, marketing costs went through the roof. So, hey, we gotta make that money back somehow, let’s just charge more for the drugs. And then once they got away with that, they said, well, what if we just increased the prices again? What if we did it again? What if we do it 27 times over a five-year span? We can’t get in trouble for it. And Mr. Gonzalez, though he may have looked like a fool, Katie Porter absolutely demolished him. He’s, he’s not going to be in trouble for it and his company doesn’t have to lower the prices. His company could come out today and said, you know what? We’re raising the prices again, because Katie Porter us off. And there is literally nothing you can do about it. That’s the sad reality of the pharmaceutical industry here in the United States. And that’s why these hearings are so important. Something has to be done about this. And if it is going to get done, it’s going to be because of people like Katie Porter, grilling these executives and forcing them to look at the very truth that they have been choosing to hide from for years.