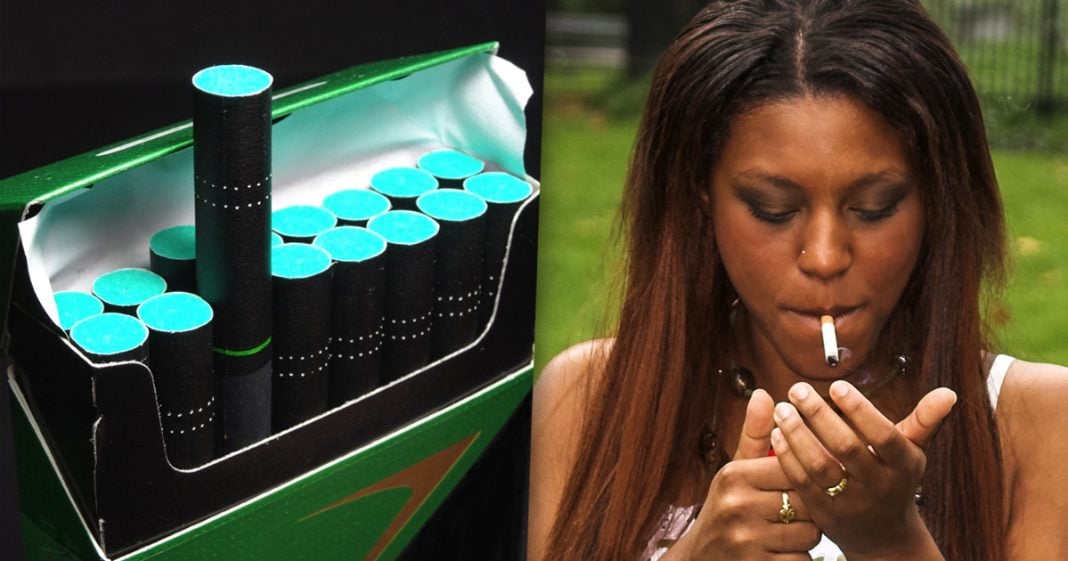 Via The Big Picture: Smoke ’em if you got ’em…at least for the time being. Former president Trump took up arms against the vaping industry, and now president Biden is moving to ban menthol-flavored cigarettes among other tobacco products. Attorney Sara Papantonio explains who bears the brunt from bans.

Holland Cooke:                   In a statement, the food and drug administration predicts that banning menthol, the last allowable flavor in cigarettes, and banning all flavors in cigars will help save lives, particularly among those disproportionately affected by these deadly products. Who are those disproportionately affected and with menthol accounting for one third of all cigarettes sales, how will big tobacco fight back? Let’s ask attorney Sara Papantonio of the Levin Papantonio Rafferty law firm. Sara, right off the bat, this looks contentious. Proponents of this ban point to those disproportionally affected as the 85 to 90% of African American smokers and vapers preferring menthol products. While opponents, civil rights groups, fear over policing of black communities. Lots to unpack here, Sara. Where do you see all this headed?

Sara Papantonio:              We’ll to start Holland. This ban has the potential to encourage nearly 1 million people to quit smoking. That’s the potential to save a lot of lives just by banning a flavor of tobacco. So this shouldn’t be spun as a racial injustice issue, this should be viewed as a great step forward to promoting public health and preventing unnecessary deaths among minority communities. But the real reason that minorities are being disproportionately affected by this menthol ban is because minority communities are being disproportionately targeted by the tobacco industry. The tobacco industry aggressively markets to these communities because they’re one of the last strongholds that this industry relies on to make their money. So, honestly Holland, I wouldn’t be surprised if there were actually tobacco industry that was pushing this racial narrative, be these, because these companies are going to do whatever they can to keep cigarettes on the market.

But we got to break down exactly how this menthol ban works, because like you said, many fear that the results of this will be over-policing of the black community. But that’s not really going to be the case based on my evaluation of it. And that’s because this ban is enforceable only against manufacturers and distributors and wholesale sellers of cigarettes. It’s not going to be enforceable against the individual holders of cigarettes. So what we’re really going to see is over-policing of the tobacco industry, which is good, rather than over-policing of individuals, which is going to be a huge step in the right direction right now.

Holland Cooke:                   I’m glad you said spun because back in olden times, when there were billboards by the side of the road for cigarettes, you saw the Newport billboards in the hood and the Marlboro billboards elsewhere. So I think you put your finger on it when you said spun. Several years ago, responding to public outcry, the food and drug administration banned cartridge based fruit or mint flavored e-cigarettes after waffling on the issue for several months, then president Trump F bombed his health and human services secretary in the oval office. And after meeting with representatives of the e-cigarette industry who were concerned about their industry and cautioned by his campaign, that vaping was popular in certain key States, Trump went swamp speak proclaiming, we’re going to protect our families, our children, and we’re going to protect the industry.

Just this past March, Allegheny County became the second County in Pennsylvania to ban e-cigarette use in public spaces, to applause from the university of Pittsburgh medical center, health experts there and elsewhere dispute manufacturer’s claims that vaping is a safer alternative to tobacco cigarettes and that vaping helped smokers quit. And that exhaled vapor does not contain the same dangerous toxic gases as second-hand tobacco smoke. Sara, an appeals court in Indiana struck down part of a similar law there. With all the big money that big tobacco can spend on lawyers, are bans like these just inherently fragile?

Sara Papantonio:              Well, first I got to point out exactly how this industry is spinning the narrative, like we said. Vaping is not a safer alternative to cigarettes. In fact, what we found is that there can be up to eight times the amount of nicotine in a single puff of an e-cigarette versus that of a regular cigarette. And that’s not even to mention all of the carcinogens that are found in this vaping liquid. So it’s not a safe, safer alternative to the traditional cigarette. It’s just a narrative that this industry is spinning and they continue to spin this narrative because they’re so desperate to create this new generation of addicts, right, that’s the classic tobacco business model that we’ve seen over the years. Let’s get people addicted, but specifically let’s get children addicted. Let’s get them addicted with that flavored nicotine. So e-cigarette manufacturers are pushing hundreds of thousands of dollars into schools in an effort to promote vaping.

They’re telling people it’s safe and it’s become a serious issue among teens. We see, we see the increase in vaping rise substantially. So luckily States are pushing this legislation because they recognize that e-cigarette manufacturers are targeting our children. They’re targeting young kids, middle school kids. So we’re going to continue to see cities fighting back and States fighting back and that’s good, but not all of them are going to be successful because you know, it really is going to just depend on the nature of the legislation that’s proposed and it’s going to depend on the jurisdiction that it’s in. And of course, it’s going to depend on whether or not we can overcome the thousands of dollars, hundreds of thousands of dollars, that these industries fund in their legal team to try to overcome these hurdles.

Holland Cooke:                   Yeah. You know, that brings to mind something else because recreational cannabis is now legal in what 17 States. I speak to you from Providence, Rhode Island, where up and down interstate 95, there is a billboard war going between the just over the state line in Massachusetts weed stores. And no government seems to be resisting this because everyone needs the tax money. Do you foresee a backlash against legal weed?

Sara Papantonio:              It’s, it’s all going to depend on what the federal government does. Like we see when you’re traveling over interstate borders, it does become sort of an issue because, you know, if it’s legal in one state and not legal in another, then you run into interstate commerce issues. But it’s really going to have to come down to uniformity across the States when we find a solution. I think like you said, States are so willing to accept it because, because they’re seeing huge profit rises in medical marijuana. So it’s really going to see, it’d be interesting to see what the federal government decides and how this issue develops over time.

Holland Cooke:                   Yeah. And at the moment these weed retailers have a real problem because the banks don’t want to do business with them. Sara Papantonio, Levin Papantonio Rafferty. Thank you as always for stepping into the Big Picture.