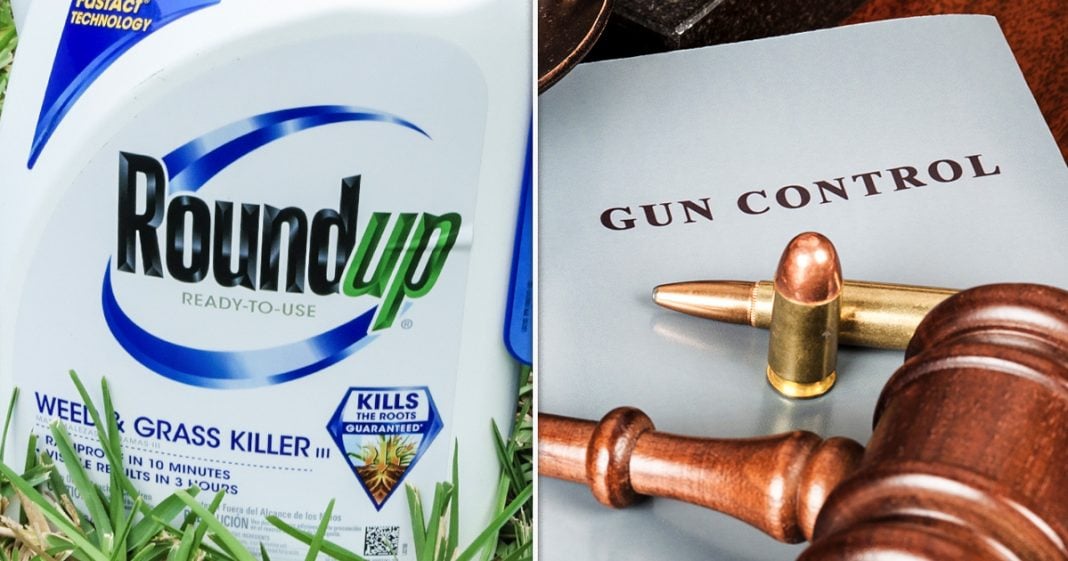 Via America’s Lawyer: Mike Papantonio and Trial Lawyer Magazine editor Farron Cousins shine a spotlight on internal emails recently uncovered between Monsanto executives which suggest company tactics to suppress scientific findings of cancer-causing chemicals in their popular weedkiller Roundup. Plus, Mike Papantonio is joined by legal journalist Mollye Barrows to break down a Florida case of manslaughter, in which an unarmed black man was shot and killed in a grocery store parking lot. The defense argued the shooter was abiding by the “Stand Your Ground” law.

Mike Papantonio:             Monsanto’s disgusting, dirty deeds are starting to come to light as both lawsuits and leaks are revealing the company’s worst behavior. They’ve got after journalists, activists, and even concerned parents in order to protect their ugly profits. I have Farron Cousins from the trial lawyer magazine here to tell us what’s happening. This story, you know, it’s, I feel like sometimes we do a lot of Monsanto stories, but the truth is they’re, they’re outrageous. I mean the conduct of Bayer and Monsanto has crossed the lines. Tell us this story.

Farron Cousins:                  Well, this one is particularly disturbing because you have this group Moms Across America and all the way back in 2013 they sent a letter. A very nice actually letter to Monsanto just basically saying, hey, studies are showing that glyphosate and Roundup is causing cancer. It’s linked to actually a whole host of different diseases. Would you please consider not using it anymore until you can guarantee the safety? And that actually prompted one Monsanto scientist to email one of his colleagues and basically say, listen, I sure wish we could slap the heck out of these parents, but of course we don’t want to be seen as attacking parents. That’s what he said in the email.

Mike Papantonio:             Okay, well let me, let me tell, this guy is Dr. Daniel Goldstein. That’s who this character is. Okay. He is a biostitute. Now, a lot of people don’t understand why I use the term biostitute. We originated the term and what it means is a scientist or a medical professional or somebody who is willing to create phony literature, lies. Willing to put their name on the bottom of whatever kind of lies they’re asked to do by Monsanto. Now, Dr. Daniel Goldstein is the guy who was willing to do that. Dr. Daniel Goldstein is the guy who wrote the memo, hey, maybe we ought to just start roughing these people up.

I mean, that’s basically what he’s saying. And so the way they, now understand these are the people who brought us DDT, PCB, agent orange and a half a dozen other chemicals that will kill you. And each time they fought the same way. In DDT, they hired people like Goldstein. They didn’t hire him, but they hired people like Goldstein to tell lies about the safety of DDT. They did it with PCBs, they did it with Agent Orange. They always have these people out there who will do anything you ask them to do if you pay them money. And so in this situation, this biostitute and the guys surrounding Dr. Goldstein said, hey, we’re just going to go after these women who are just moms, they’re moms that are mad about this product killing people.

Farron Cousins:                  Right. Yeah, I mean, that was the big crime of Moms Across America was we don’t want our kids to be poisoned, but apparently that was too much for Monsanto. They were not happy about this. And here’s the thing we’re also finding out from these documents that are coming out from the trials that have happened, the pretrial that’s going on, these have all been released to the public available for everybody. But we’re finding out it wasn’t just this Moms Across America group, which it’s disgusting enough that he said we should slap the, you know, expletive out of them. But you go on to find out that they’ve been doing it to journalists. Carey Gillam, who has been phenomenal…

Mike Papantonio:             Tell, tell us about fusion. Fusion is its own organization and what it is, they’re hitmen.

Mike Papantonio:             They’re hitmen. They’re scientific hitmen who go after journalists, they go after scientists who disagree with them. They try to get the people fired from their job. They try to discredit the, the science that they, they, they create. They, they do, they, they even have these people followed, had private investigators following these people to try to build a file on them.

Farron Cousins:                  And, and they, they build these dossiers. I mean, they, they do have quite literally actual files on these people like Carey Gillam. What they do though, they’ll go through anything in this person’s past, have they ever been arrested? Have they had a DUI? Do they have speeding tickets? Had, did they say something crazy on social media one time in a tweet? And they put all that together in the file and that becomes the hit piece for the, intelligence fusion center, is what they call it. And this is a real thing that Monsanto had. It exists and its sole purpose is to take on anyone who tries to say that their product is dangerous.

Mike Papantonio:             How about this. They’re now in bed with Bayer. Bayer of course, are the people who brought us factor eight. Factor eight, now Bayer I could go on, we could do our own show on Bayer, but you add Bayer to Monsanto and what I love about this is this new alliance is drilling up all of these ugly stories about Bayer. Like the fact that their, you know, their management was, came from the Auschwitz. He was, he was a war criminal.

Mike Papantonio:             Okay. Fritz ter Meer was a war criminal and Bayer said, well, we want him to help him, we want him to lead the company. He’s the guy at Auschwitz who developed cyclone gases, gases that they’d killed people by the millions. He’s the guy that Bayer to this day, still honors every year. They have a special, they have a special program to honor Fritz ter Meer. Now that doesn’t stop there. Bayer are also, they’re also the people who created factor eight. Now it was, it was a medicine for hemophiliacs and it was, it was there to stop bleeding. What they didn’t tell everybody is they knew, Bayer knew that it was infected with AIDS virus and they took it off the market in the U S and they sold it all over the world. Thousands of people died because of it. So Monsanto and Bayer brother what a, what a perfect match.