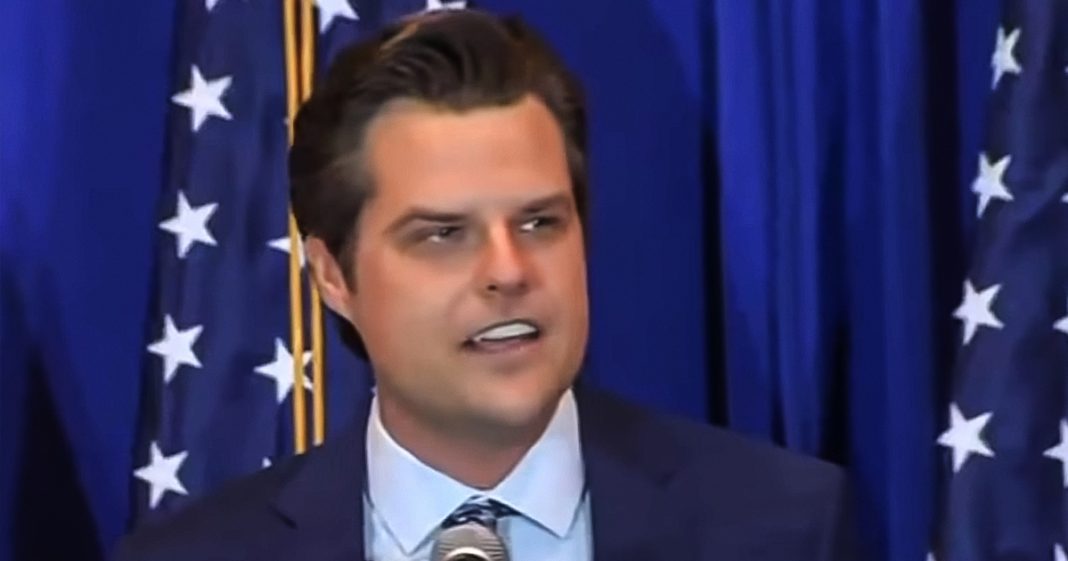 Details about the plea deal for Joel Greenberg are slowly leaking out, and what we do know now is pretty solid evidence that the walls are closing in on Matt Gaetz. Greenberg is only looking at about 12 years in prison, which is a pretty short time considering the fact that he was originally indicted on more than 30 counts, including trafficking. To get a deal this sweet, he has to have information on “bigger fish,” as Ring of Fire’s Farron Cousins explains.

Republican Congressman Matt Gaetz, even though he’s pretending he’s not, is in a heck of a lot of trouble right now. Monday’s new plea from Joel Greenberg, the indicted Florida tax collector, really shows us what I guess is happening, we should say, in this investigation in a way that I don’t think a lot of people appreciate. But a lot of former prosecutors have been coming out over the last couple of days, basically telling us that this plea deal kind of the beginning of the end for Matt Gaetz, to be honest. What they’re saying, these former prosecutors, is that a plea deal like this couldn’t be made, especially considering how intense these charges are against Joel Greenberg. I mean, hell, the guy is facing charges on human trafficking, trafficking a minor, that is a charge that comes with a lofty prison sentence. Yet Greenberg was allowed to plead guilty to 6, not 33 charges like he had been indicted on, and he’s only facing 12 years in prison.

So as the details of this deal continue to slowly trickle out, prosecutors are telling us that they wouldn’t have made this deal. The other prosecutors, the ones working on the case wouldn’t have made this deal if there weren’t bigger fish to fry. And one of those fish they’re telling us very clearly has to be Matt Gaetz. Now, of course, at this point, Matt Gaetz has not been named as one of these alleged bigger fish, right? So let’s be clear about that. No charges against Matt Gaetz yet, but the end is nigh. Let’s be real about that for just a moment here. With all of the evidence that has come out already against Matt Gaetz, those Venmo payments, you know, you can’t really hide from that when the other side has the receipts. The confession letter from Joel Greenberg. The fact that the feds are also trying to get Gaetz’s ex-girlfriend to flip.

I mean, you don’t go after the ex-girlfriend, if the ex-boyfriend isn’t the target. And that’s the difference here. It’s becoming increasingly clear, clear, excuse me, that Matt Gaetz is in fact, the target in this investigation. And again, I think five or six men are ones in the plea deal that that Greenberg is going to cooperate with. So obviously there are others. Some of these could be other Florida politicians because a lot of people in the state of Florida are linked to Greenberg. They could just be people who were helping to supply the girls. You know, if we’re talking about the possibility of bringing down some kind of human trafficking ring here in the state of Florida, that’s also great news. That’s the kind of thing that does need to be broken up. Those people do need to be in prison. But it’s the 12 years, the 12 years that Greenberg is possibly looking at and we’ll know more.

I think the sentencing 75 days out from Monday’s new plea, the sentence is going to tell us a lot. And what’s funny is that I had mentioned that. I had mentioned that last week when we first found out that Greenberg was going to be changing his plea. I said, once we see the sentence, that’s going to tell us how valuable the information is and the quality of the targets that Greenberg is flipping on. And that is exactly what all of these former prosecutors are telling us right now. 12 years is nothing for the charges that Greenberg is up on. So he must have a heck of a lot of information on a heck of a lot of powerful people in order to be able to get that kind of leniency here. And there is little question in these prosecutors minds that the biggest fish they know of right now is Matt Gaetz.