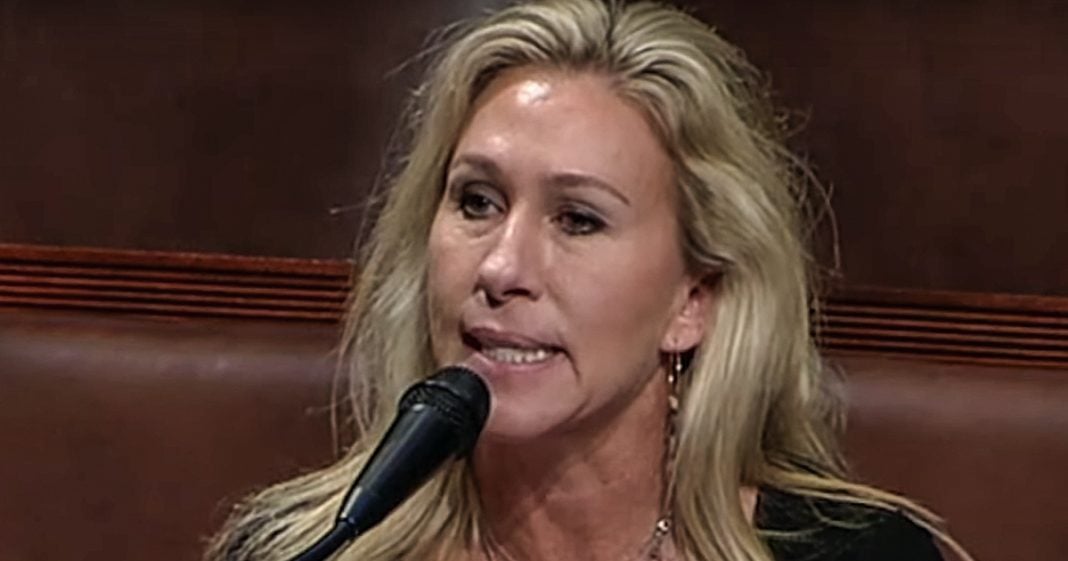 Republican Representative Marjorie Taylor Greene gave an insane and factually inaccurate speech on the House floor this week, where she actually defended the Capitol rioters and attacked Black Lives Matter protestors – the people who she claimed were the REAL insurrectionists. Greene can’t help but let her bigotry and insanity show, and she has proven repeatedly during the past few months that she is absolutely not stable enough to serve in Congress. Ring of Fire’s Farron Cousins discusses this.

Yesterday, the House took a vote on whether or not to form the commission to investigate the January 6th Capitol riots. And of course, plenty of Republicans decided that they wanted to be the pro insurrection party and none of them were more vocal in their support of the insurrectionists than Republican representative, Marjorie Taylor Greene. And I’m sure that news comes as a shock to absolutely no one who regularly watches this program. Marjorie Taylor Greene took to the house floor yesterday to, as she put it, rise in opposition to this vote. And then she proceeded to not only defend the people who attacked the Capitol that day, but then to also attack black lives matter protesters from last summer. Here is what Greene had to say. I rise in opposition to a commission to study the events of January 6th, as well as spending $2 billion in security supplemental. The question that comes to mind is this, what about all the riots that happened during the summer of 2020 after the death of George Floyd?

What about the damage caused to federal buildings, churches, people’s businesses and innocent people who were killed? Is that not an insurrection? Indeed we should have a commission to study the violent BLM and Antifa mobs who have plagued American cities this past summer. And that’s for the American people who, by the way, pay the taxes that fund everything we do here. More people were killed in the Capitol insurrection than were killed during the protests last summer. Uh, but by the way, if we’re keeping score at home here, Marjorie, two people that were killed were actually killed by a violent right-wing extremist by the name of Kyle Rittenhouse. So, you know, you, you may, you may want to check your facts before you start saying that BLM and Antifa are the violent, dangerous ones. But it was one of your people that Republicans are still coming to the defense of, who, who crossed a, crossed state lines and murdered two people.

So, you know, and now you’re hail, heralding him as a right-wing hero. The BLM and Antifa, you know, protests, riots, whatever she wants to call them this past summer, we’re also learning a lot more. Thanks to brilliant reporting over at the Intercept, turns out that a couple of right-wing groups had these little goon squads that went around actually causing a lot of damage and then blaming it on Antifa and there’s video of this too, by the way, I believe it was Ken Klippenstein, with the Intercept who uncovered this. And he has posted the videos over at the Intercept. These were right-wingers doing this damage to buildings and then trying to blame it on Antifa. But of course they were dumb enough to film it. So there’s video evidence to prove you wrong, Marjorie. Everything you said in your little diatribe here was wrong.

Everything you said was in support of those psychotic individuals who stormed into the Capitol, started stealing things from the Capitol building. You know, Nancy Pelosi’s laptop was stolen. The speaker’s lectern was stolen. We’ve all seen the guy walking out with it. They were happy, proud. They were happy. They were psychotic. I mean, if you do something like that, then yeah, there’s something clearly wrong with you. Much like there’s something clearly wrong, in my opinion, with Marjorie Taylor Greene. This woman is a threat. This woman is a danger to her fellow members of Congress. And we have seen that based on her behavior in just the last two weeks here. And here she is sitting on the House floor, attacking the wrong groups, blaming violence and insurrection on the wrong groups, because the people who really did those things are the people that she counts on to keep her in office.