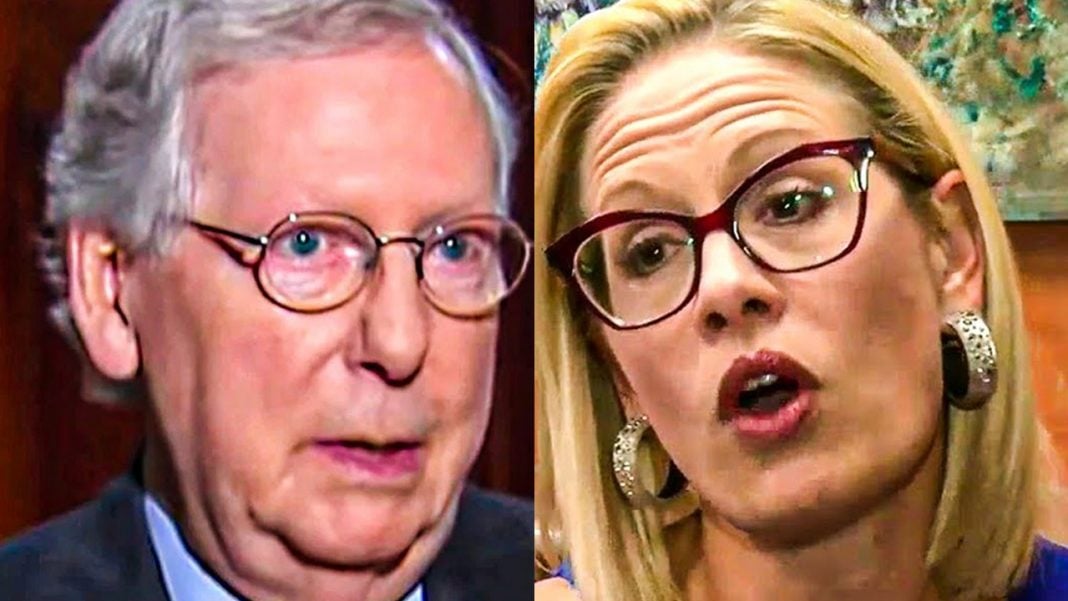 Senate Minority Leader Mitch McConnell has been privately telling his fellow Republicans in the Senate that they don’t need to worry about the tax hike that Biden is proposing to pay for his infrastructure package because McConnell has a secret weapon – Democratic Senator Kyrsten Sinema. McConnell told his Republicans that Sinema is on their side and that she would kill the business tax hike in the infrastructure package. Ring of Fire’s Farron Cousins explains what’s happening.

Republicans in Congress are still freaking out over the fact that, uh, Joe Biden’s infrastructure plan, the $2.3 trillion infrastructure package is paid for by raising taxes on both corporations and wealthy Americans. If you make it more than $400,000 a year, your taxes are gonna go up slightly. If you’re a corporation, they’re also going to tick up by a few, a few percent manage points, and that’s how we’re going to this massive infrastructure package. That by the way, is supported by an overwhelming majority of Americans, including Republicans as are the tax hikes included in it.

Even Republicans like those tax hikes, everybody likes the tax hikes, except of course, for Republicans in the house and Senate and another person too. And I’ll get to that in just a moment because Mitch McConnell concerned about these tax hikes has according to the Washington post, been meeting with his Republicans behind closed doors and privately assuring them that we don’t have to worry about these tax hikes actually taking effect because we have an ACE up our sleeves and that ACE is democratic. Senator Kirsten Sinema, Mitch McConnell is telling his Republicans don’t worry because cinema is on our side and cinema is not going to allow those tax hikes to take place. So breathe deep. We’re going to be okay.

Kirsten Sinema, the same woman who did her little to increasing the minimum wage is now giving a big double to not raising taxes on people who can afford it so that we can finally move this country forward and make the investment in infrastructure that should have been made 20 years ago. We heard ring of fire have been doing stories about America’s crumbling infrastructure since the Bush administration, since the first term of the Bush administration, by the way, that’s how long we’ve been doing, doing this. I have folders upon folders sitting in a file cabinet back at the office of America’s crumbling infrastructure. And they each have years them, you know, America’s crumbling infrastructure, 2004. It just goes on and on because this is something that Mike and I have talked about relentlessly, because this is a problem that has been going on for 20 frigging years.

And now that we’re on the cusp of it, now that we’re right here about to actually be able to make things happen because the Democrats are pushing it. We have to worry about another Democrat working with Republicans, because they don’t want the wealthy to pay a couple dollars more in taxes. This is why we can’t have nice things. This is why we can’t make progress as a country, not just because of the Republicans, but because of these pro corporate Democrats like mansion and cinema, who will do whatever it takes to appease corporations, even if it means going against the will of their own constituents, going against popular public opinion and doing something that the public doesn’t want them to do.