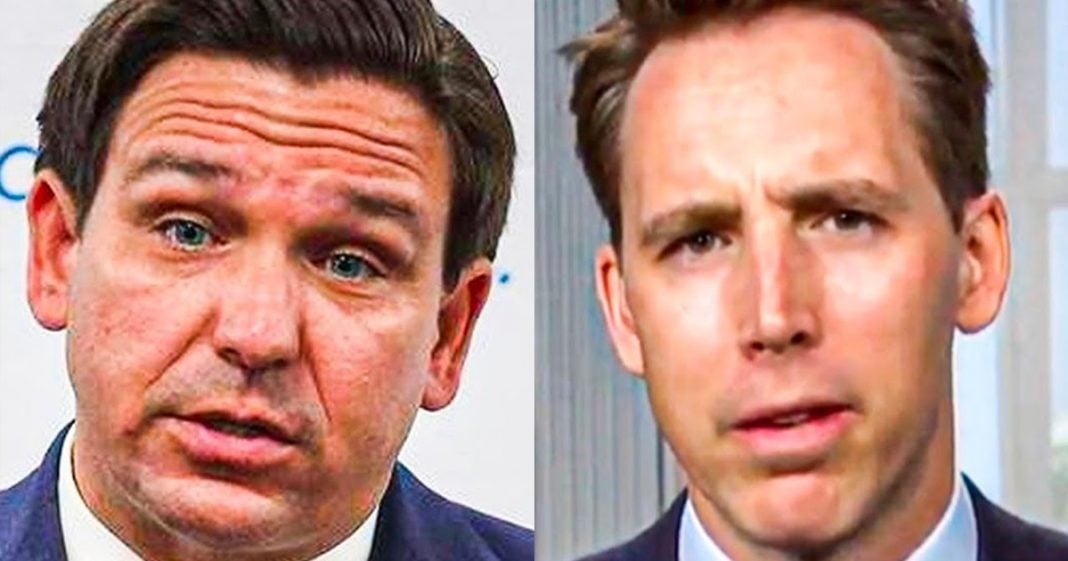 The Democratic Party is finally trying to stay ahead of the curve, and they have already compiled a list of more than 20 names of Republicans who could potentially be contenders in 2024. And they are getting the ball rolling on the opposition research, too. Democrats in the past have allowed themselves to fall too far behind on things like this, allowing Republican candidates to shape their own narratives and attack Democrats in the process. But not this time. Ring of Fire’s Farron Cousins explains what’s happening.

One of the most frequent criticisms that I have lobbed against the Democratic party over the years is that they suck at messaging. They wait too long. They let Republicans get ahead of issues and then they’re always trying to play from behind, and playing defense, basically, defense. But right now May, 2021 the Democrats are actually finally thinking ahead. According to a new report by Politico, the Democratic party has come up with a list of at least 20 individuals in the Republican party who might be running for president in 2024 and they have already begun pulling opposition research on these 20 plus individuals. Now here’s a sampling of who some of these people are. Oh God, it’s such a gross group. President Trump, obviously. Florida governor Ron DeSantis, Nikki Haley, Tucker Carlson and Mike Lindell, just to, just to make sure they got all the bases covered and that’s actually pretty good.

But Mike Lindell, I mean, come on, you don’t need to do oppo research on him, but anyway. Ted Cruz, Josh Hawley, Rick Scott, Mike Pence, Mike Pompeo, all of these individuals right now, there’s teams of people working within the Democratic party, pulling stories, pulling video clips, putting things together for this opposition research so that no matter who it is, the Democratic party is armed and ready. And God I’ve been waiting for that forever. I love the fact that they’re finally being proactive. I love the fact that they’re not wasting any time, that they’re not letting these Republicans go out there, steal the national spotlight, then trying to take them down after the fact. No, we’re going to do it first, we’re going to do it fast and we’re going to cripple you before you even get a chance to go out there and say that you’re running, hopefully. Because see, that’s the other part of it and I guess I got to, do got to criticize you on that. Are you gonna start running ads against these individuals? Because you should. Let’s be honest, you have the money. Why not go ahead and start running attack ads against these people now?

Don’t wait until election season. Don’t wait until primary season. Hell don’t even wait till next year when the midterms roll out, start running ads now and continue running ads. They don’t have to be big, massive nationwide campaigns, but target them. Target them in their home state. Target them in swing States. Run some ads in Florida here talking about Ron DeSantis covering up the COVID deaths. Run ads here in Florida, tying every Republican in this state to Matt Gaetz because by God, they’re all tied to him. Run ads in Texas about Ted Cruz skipping off to Cancun. I know it’s still fresh in their minds, but you have to keep it there. So that’s the other part of this that needs to happen. You have the money. There’s plenty of Democratic, you know, PACS that also have the money. Get out there, start running these ads and be as brutal with them as the Republicans are. You do that, you stay ahead of these issues and put Republicans on their heel for the first time in decades, and watch how much you benefit from finally being proactive.