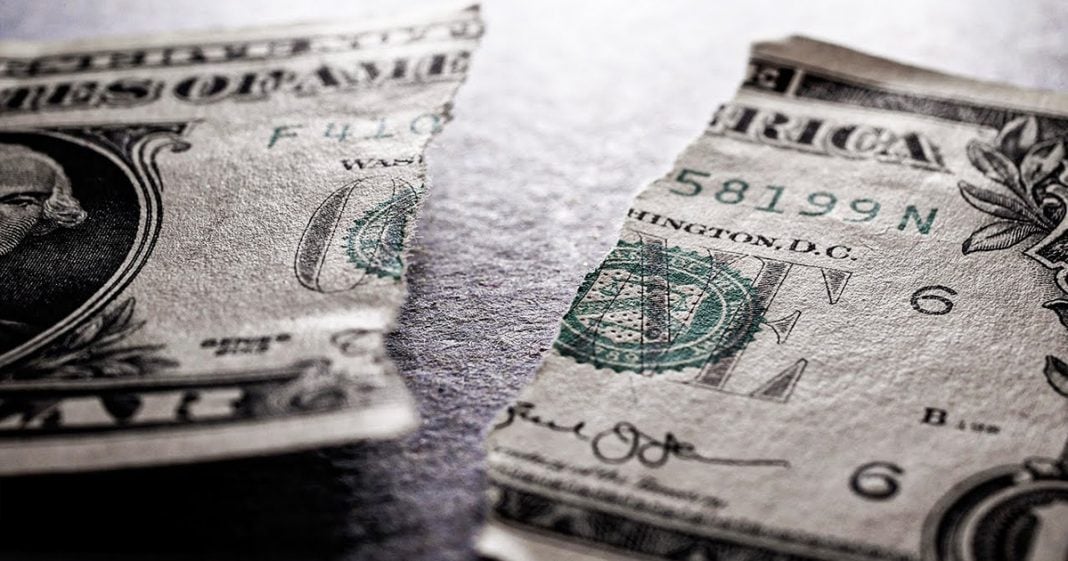 The era of trickle down economics is over. Most Americans – from both political Parties – believe that the wealthy and corporations do not pay their “fair share” in taxes. This is a stark contrast to the policies that the Republican Party has been pushing for the past 40 years, and it might actually mean that these trickle down lies are no longer going to work on a public that is tired of paying up so corporations and the wealthy can pay less. Ring of Fire’s Farron Cousins discusses this.

A new poll by the Pew Research foundation found that 80% of Americans are bothered by the fact that the wealthy and corporations do not pay what they consider to be their fair share in taxes here in the United States, 80% say it bothers them. They don’t like this. Something doesn’t feel right about this. We want these people to pay their fair share. That alone basically kills the last 41 years of Republican policies, because the only idea that Republicans have pushed for 40 years, since Ronald Reagan came into office, was the theory of trickle-down economics. A failed theory, a theory that even I think about 10, 12 years ago, the guy that created it, David Stockman, came out and said, yeah, it never works. So you can’t make it work. Um, but Republicans still pushed it.

And the public’s tired of it because that’s what this poll is really about. It’s not just telling us that people want the wealthy to pay more. They want corporations to pay more. It’s the fact that people woke up and realized they’re not getting any money from the trickle-down, because the trickle-down doesn’t work. And to that point, I got to credit social media with this. Social media is the one thing that’s different. You know, basically the last time Republicans passed their massive tax cuts at the end of 2017 and they sold us all those big lies, you know, it’s going to create more jobs. It’s going to put more money in your pocket. You’re going to pay less. You’re going to get more. They’re going to give you bonuses. Look at all these bonuses they’re giving out.

So in 2017, we actually had a very robust social media apparatus that did not exist in 2003 and 2006 for the Bush tax cuts. Sure as hell didn’t exist, you know, in the eighties and early nineties for those tax cuts. So because we had people on social media, calling out these lies in real time, showing their pay stub some of them, saying I’m actually making less under this new plan. Everybody woke up and everybody realized that it wasn’t just them that was getting screwed, it was everybody. Because back in the day, when you didn’t have global or even, you know, just countrywide communication with complete strangers, you’d get your paycheck during trickle-down and say, well, I’m not benefiting, but I am assuming based on what I’ve been told, that everybody else is. So, okay, I may not be getting it, but everybody else is.

The economy’s great. We’re good. But once they got on social media and realized, well, hold up, you’re not getting it either. Then who is? And nobody was able to raise their hands except for the wealthy elite, that’s when it clicked for these people. That’s when support for trickle-down started dropping. And today 80% of the public is basically off that the wealthy and corporations aren’t paying their fair share. And knowing that now, what the hell are Republicans going to talk about? Because cutting taxes for the wealthy is the only thing they’ve campaigned on, again, in 40 years. And if that thought off the public, then the Republican party doesn’t have a leg to stand on. Do they?