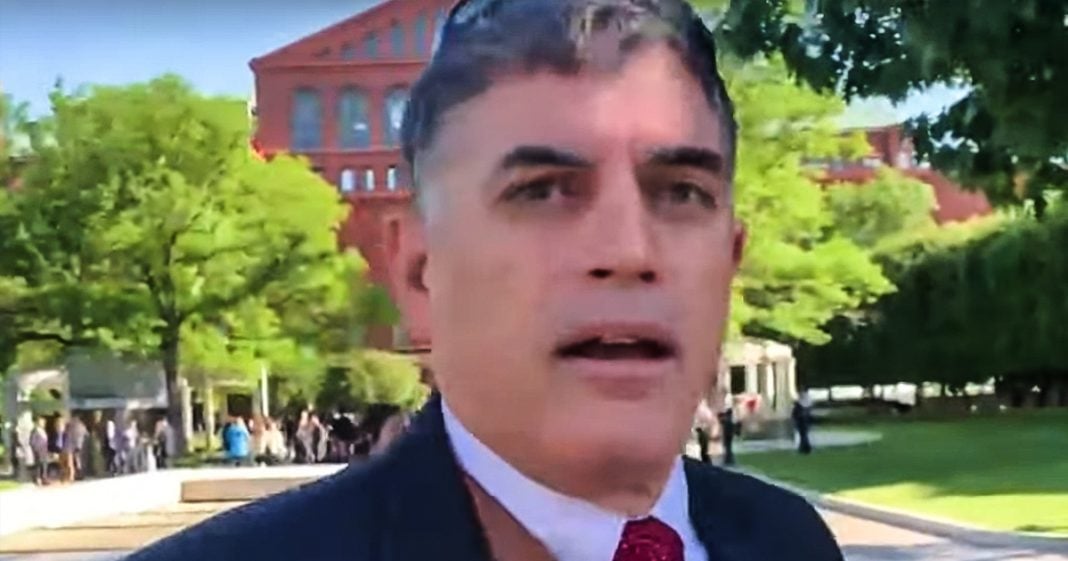 During last week’s Congressional hearing on the events of January 6th, Republican Representative Andrew Clyde made headlines for comparing the rioters to groups of tourists taking a stroll through the Capitol building. But after his comments, a photo emerged showing a panicked Clyde helping his colleagues barricade a door with a large piece of furniture. They were scared, and there’s nothing wrong with that, and yet they continue to deny what we all saw with our own eyes. Ring of Fire’s Farron Cousins discusses this.

Last week, Republican representative Andrew Clyde, a man who prior to last week most people didn’t even know existed, but he made headlines last week during the hearing about the January 6th Capitol riot, where he compared the rioters, the insurrectionists, to tourists on a Capitol tour, said it was no different. People casually strolling around doing all the things that tourists would do. You know, like stealing Nancy Pelosi’s laptop and a speaker’s lectern from the floor of the House. Yes, totally touristy things. But he did this to convince us that, hey, Capitol riot wasn’t all that bad. These Trump supporters, these Republicans, were just like everybody else who comes it was through here. Well luckily, a Roll Call reporter, Roll Call photographer, excuse me, Tom Williams. He was paying attention to what Andrew Clyde said. And Mr. Williams, again, being a photographer for Roll Call tweeted out this photograph of Andrew Clyde, helping a group of other representatives there, barricade the doors so that the rioters couldn’t get inside where lawmakers were.

So there’s the photograph right there for everybody to see, Andrew Clyde, he’s helping them shove this massive piece of furniture. I mean, you can see that they’re straining. You can see that they’re scared in the photographs, Pushing it, not just moving it, by the way up against the door. They’re, they’re pushing it there. They’re holding it there because they don’t want those doors to be broken down because they are all fearing for their safety and the safety of everyone else in that room. Tell me, Clyde, do you have to do that typically for tours going on in the Capitol building? When you see a family coming down the hall with a guide showing them things, do you think, aw, crap, let me go get the big dresser and push it up against the door? I’m willing to bet you don’t. It’s okay to be scared by the way, Clyde. It’s okay to admit, you know what, we were terrified. But the reason you can’t do that is not because you’re too much of a manly man to admit you’re scared. I don’t think that that’s what this is at all.

The reason you can’t admit that you were scared of these individuals is because to do so would be to admit that these people were dangerous and these people are your Republican’s, Clyde. That’s why you can’t admit it because you can’t admit that Republican’s, these crazed fanatical right-wing terrorists, you can’t admit that they are a threat to us here in the United States. But it’s okay that you can’t admit that because intelligence agencies have already admitted that and they’ve been admitting that for years in report, after report, after report. Attacks in this country by violent extremists have hit a 20 year high in the last 12 months. So while you have all these people out there crying about, oh, Antifa’s scary, oh, black lives matter is scary. Oh, they’re horrible. Bull crap. The statistics tell the truth. And it’s people like those that were there at that Capitol insurrection. It’s the crazed right-wingers that show up at the black lives matter protests, trying to instigate stuff, trying to become violent. It’s the proud boys. It’s all of these other horrible right-wing groups that are out there causing violence and mayhem. And Andrew Clyde knows it. But because those are his voters, he’s not allowed to admit it.