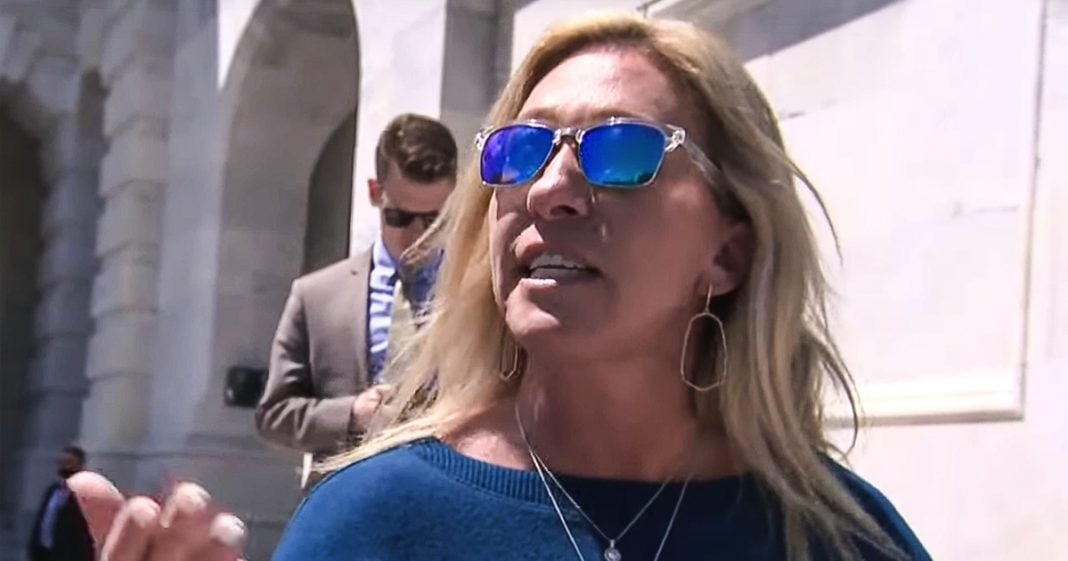 Tax records from the state of Georgia appear to show that Republican Representative Marjorie Taylor Greene may have committed tax fraud by filing homestead exemption on two separate properties. Residents are only allowed to claim the exemption on a single property, but the records show at least two properties with the exemption under Greene and her husband’s name. Ring of Fire’s Farron Cousins explains what’s happening.

Is it possible that Republican Marjorie Taylor Greene is both a little mentally unwell and a criminal? Well, according to new reports, yes, that is incredibly likely. Because it looks like, according to filings in the state of Georgia, that Marjorie Taylor Greene and her husband may have committed some minor tax fraud by claiming two permanent residence in the state of Georgia, on their tax forms. Now for anyone who lives in a homestead exemption state, you understand that you cannot file two permanent residences. Homestead exemption allows you to basically not have to pay as much tax on a property if that property is your primary residence, homestead exemption, it’s exactly what it sounds like. And since it saves you a lot of money, you do run into a lot of tax cheats out there that attempt to file two homestead exemptions.

But the law is very clear in these states, including Georgia. You can only file it on one property. That’s it. And the records seem to indicate that Marjorie Taylor Greene and her husband filed It on two properties as recently as the year 2020. So this isn’t some far off thing that they did. This was literally last year. And having lived in Georgia, I think for pretty much their entire lives, they know how the homestead exemption law works. Right? You don’t get to, you don’t get to say like, oh, well, no, I came from a, I don’t know where, because most states actually have this. No, there’s no ignorance excuse here. They thought they could get away with it and so they attempted to get away with it. But don’t worry. Marjorie Taylor Greene is not going to finally see the inside of a jail cell from the wrong side out. The worst that could happen I think is like a $12,000 fine on the couple for filing twice. Which Is basically because not only do you have to pay the extra tax on the property that you incorrectly filed an exemption for, you have to pay double that plus a fine, so up to I think about $12,000.

So she might get fined $12,000. I think that’s about the extent of the penalties here. But this also kind of shows you who these people are, right? They know the law, they know the rules, they made a conscious choice here, if the tax documents can be trusted, they made the conscious choice to do this because they don’t care. And I’m willing to bet that 2020 wasn’t the first year they tried this either. You know, they knew she was running for Congress. They knew that they were going to be under extra scrutiny. Why just try something like this out on a year when you know you’re getting additional scrutiny? No, I think we need to take a further look back at even more tax records and find out how long this little scam has been going on and then take it from there. And maybe, maybe If it’s been going on a little too long, maybe fines just don’t cut it as a penalty anymore. And maybe somebody finally needs to go to jail.