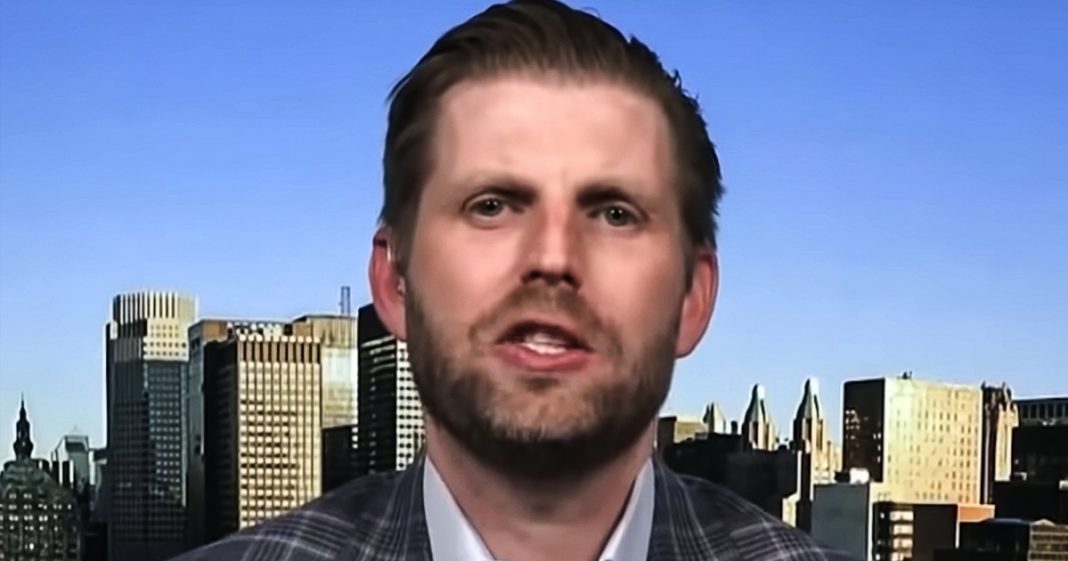 Officials in New York City want to kick the Trump family out of the Bronx – specifically a golf course that the organization owns in the Bronx – because the officials believe that the Trump name is too toxic. But Eric Trump isn’t going down without a fight, and he is demanding that the city hand over $30 million before the family will comply with the request. Eric is likely to win this battle based on the contract that the Trump Organization has with the city, as Ring of Fire’s Farron Cousins explains.

Officials in New York city are hoping to be able to kick the Trump family out of the Bronx for good. Here’s what’s happening. The Trump family through the Trump organization obviously runs a golf course in the Bronx that has Donald Trump’s name on it, has the big Trump name on it. And city officials understand that following the January 6th insurrection, the Trump name is toxic. It is so toxic that they don’t have banks that are willing to lend to them anymore. They don’t have people willing to go to his hotels. They’re not willing to go to his golf courses. Nobody wants anything to do with anything associated with the Trump name. So city officials say, you’re killing us here, get your name off the golf course and get yourself out of the golf course, so we can all move on. The problem is the city actually doesn’t have the legal right to do that.

Now the city is trying to claim that because of his actions on January 6th, because those actions were illegal they’re saying, we can kick him out of the contract. Eric Trump is saying not so fast. You want us out of the Bronx, give us $30 million and we’re going to walk away. So you put that $30 million in my hand, Eric says, and then you don’t, ain’t got to worry about us. The problem here for the city is that Eric’s right. They have a contract. Donald Trump has not been convicted of any criminal activity. That, that is, that is of utmost important here. Donald Trump has not violated the contract. You know, look, hey, don’t get me wrong folks. I would love to see Trump’s name ripped off every building that it’s on in this country. I would love to see him kicked out of every place he has ever done business in his life. Okay. I want to see him go to jail. Okay. I want him and his kids to fail. Yes I do. But this ain’t it.

This is the wrong way to do it because the Trump family is actually, for once in their lives, they’re in the right. You can’t just kick somebody out willy nilly when you have a contract and no, there’s no way the city is going to pay $30 million dollars to Eric Trump. So what this is going to cause, this is going to cause a massive legal battle. The city has already issued a statement to the Trump organization telling them, your last day here is November, what was it, November 14th and you can’t do that. The city’s going to be sued. They’re going to be sued for kicking them out. They’re probably going to be sued for defamation. Like the city put themselves in this position and they are going to be the ones who pay for it now. Like that’s how screwed they are with their attempt to do this. We get it. Everybody hates Donald Trump. But think things through first, because y’all are about to pay through the nose because you wanted to stick it to Donald Trump. And trust me, it’s not going to be worth it and yes, he’s going to win this one.