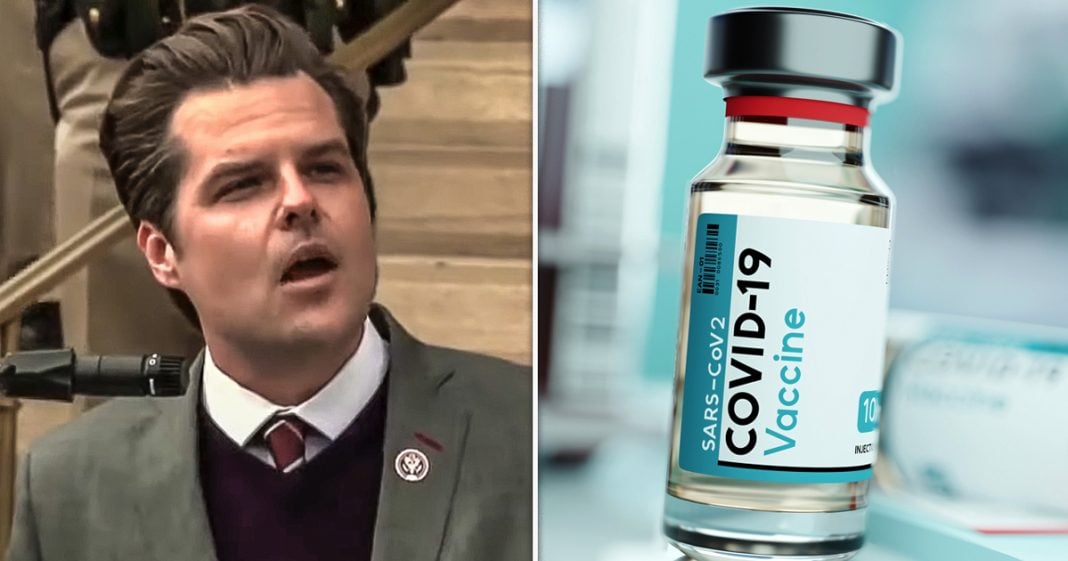 Mike Papantonio:             Republican Congressman Matt Gaetz is getting sucked further into scandal after the man, he allegedly paid to deliver girls to him, further implicated him in criminal activity. Joining me tonight to talk about this is Farron Cousins with the trial lawyer magazine, absolutely the best progressive in the business. I, your reporting just gets better and better. I’ve known you since you were a child, and every year it gets better, Farron. Really it does.

Mike Papantonio:             Lobbyists for Hollywood studios are actively working to prevent the COVID vaccine patent from being made public. And as you can figure, that’s, that’s Hollywood saying, we want to put our profits ahead of human lives. That’s what this story is about. Hollywood is saying, oh, we can’t, we can’t run the risk of giving up any of our patent rights and protections, even though 300,000 people might die because of it. This is an ugly story.

Farron Cousins:                  Yeah. I mean, what did we have over the weekend? I think on Saturday, about half a million new COVID cases alone, just in India, because they’re starved for the vaccine that we have here in the United States. We could give them the patent for it. We could let them have it. But instead the administration says, we’ll send you 30 or Moderna said, we’re going to send you 34 million doses. So 17 million, it’s not enough. But Hollywood is actively going out there, sent their lobbyists to DC. And they said, listen, if you lift the patent on this vaccine, there’s a chance that through some screwy logic that we have, that’s not even in the bill, by the way.

Mike Papantonio:             This thing that Hollywood is saying, we’re worried about, it says, no, this won’t happen. But Neil Turkewitz, who’s the talking head for this whole thing, comes up and says, we can’t run any kind of risk like that. Really? We’re running the risk of killing people all over the world because they can’t get information about how to improve the system. If you, if you do this to them, if you don’t allow this free open discussion, more people are gonna die and Hollywood knows it. And they don’t give a because it has to do with, they try to dress it up. You know, I’m waiting for a Gal Gadot maybe to do, get all of her tone deaf friends together and do a, do one of these videos. Maybe they’ll do Money by Pink Floyd. I don’t know.

Mike Papantonio:             One thing, don’t forget, 2013 Hollywood actually did this another time when they were trying to change the laws so disabled people could have better access. Deaf people wanted to have access and Hollywood fought that too. And now, but they’re saying, gee wiz, we, the only group that seems to have a brain here is the organization, the documentary group. The documentary association says absolutely we don’t care about our patent. We care about human life. World health organization, you know, they’re saying, look, this is, this is a disaster. WTO says, if we don’t do this, millions of people are going to die.

Farron Cousins:                  Well, and it, let’s be clear too. It’s not even just about the vaccines that these people are trying to get. It’s about just basic research. Even news stories coming out of the United States about the real numbers, they don’t have access to that because of our copyright laws here.

Farron Cousins:                  And again, the law does not say you can open up, you can reproduce Hollywood movies, steal them. It is explicitly prohibited.