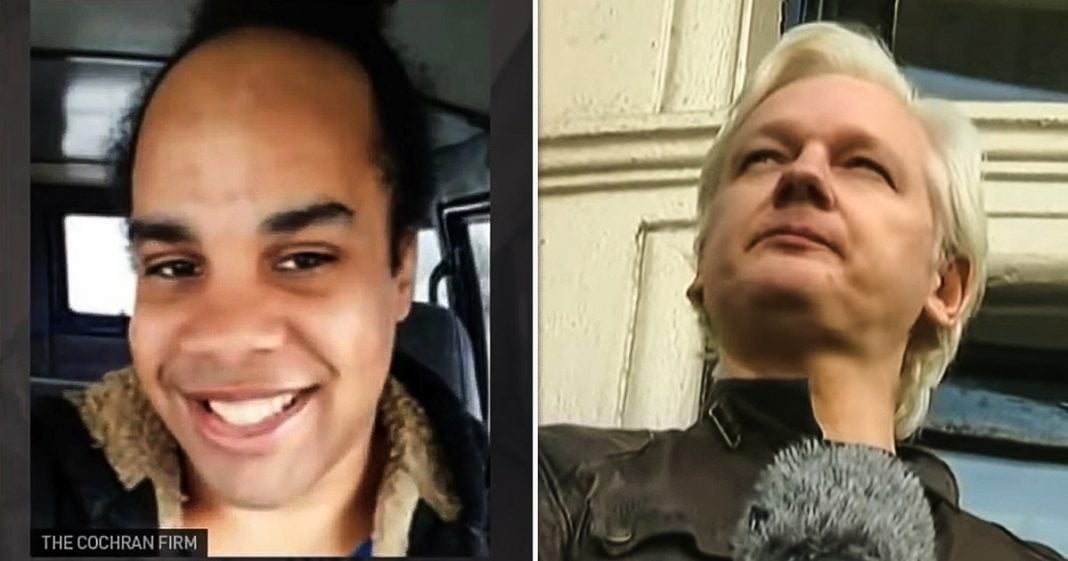 Via America’s Lawyer: 32 year-old Isaiah Brown is in critical condition after being shot 10 times by a Virginia deputy responding to Isaiah’s own 911 call. Attorney David Haynes joins Mike Papantonio to explain the grim details that led to the near-fatal shooting. Plus, host of “Redacted Tonight” Lee Camp joins Mike Papantonio to explain the threat Julian Assange presents to our intelligence community, and why President Biden still wants him extradited to face charges of treason.

Mike Papantonio:             It’s a sad reality for millions of Americans that encounters with law enforcement can quickly turn into a life or death situation. Oftentimes for no reason at all. One man in Virginia was gunned down during a 911 call. Another man was shot and killed from behind while driving a vehicle. My law partner, David Haynes, is handling one of the most important cases of a police shooting right now. David, start off by giving us the details about the fatal 911 shooting that took place.

David Haynes:                     Mike, this is the latest killing of an unarmed black man in our country, which, which occurred in the early morning hours of last Wednesday, April 21st, when Isaiah Brown, who was a 32 year old male, called for assistance because his car was broken down. The deputy, same deputy actually gave him a ride home. Another call was made for more assistance because he wasn’t able to get another vehicle. The deputy showed up, mistook a cordless phone for a handgun and shot him when he was unarmed. What we believe was 10 times with 10 bullets still remaining in his body. And Isaiah Brown is in intensive care right now fighting for his life. This was a terrible breakdown with communication between dispatch and the officer.

Mike Papantonio:             Well, tease out the phone a little bit. He had, he had a phone in his hand, right. Left, left, right hand. And he has the phone holding it up to the, to the police officer. Is that right? Or, fill that in a little bit more because it’s not really clear.

David Haynes:                     That’s exactly right. What happened was he was in the home, he placed a 911 call using a cordless house phone. He remained on the phone with 911 dispatch the entire time. He informed dispatch that he did not have a weapon. He did not have a gun. And that he was outside on the road with the phone. At that time, you could hear the sirens coming, approaching from, on the audio and the dispatch instructs him to hold his hands up. And of course he had the phone in his hand, which he did. So he was following orders. The deputy apparently then arriving on scene, immediately jumped to the conclusion that this must be a handgun, which was on, still an open line with 911. And he yelled commands at him and then unloaded his service weapon on Isaiah Brown.

Mike Papantonio:             Well, what was most, from the body cam footage, what did it reveal about the shooting and what action is, is our, what, I say our firm because you’re my law partner, I’m going to disclose that. What, what are we taking to hold this police officer accountable? Is there some, is there some standard that he obviously violated? Tell me what, tell me what your take is on that.

David Haynes:                     Exactly. There are multiple police standards that have been violated here, which we’ll, we’re pursuing. We’re also calling on the Sheriff’s office and the special prosecutor to release any additional audio. At this time, it’s unclear if there was one or two dispatchers, and if only certain audio has been released. We also, the matter is being reviewed by a special prosecutor for criminal charges. We’re asking that criminal charges be brought against this deputy. We’ll be filing a freedom of information act request immediately this week, for the other 911 audio tape. The body cam footage is very poor. You can’t really see anything. We need to know if there’s dash cam footage. And of course, then we will be continuing our investigation and likely filing a civil rights suit on behalf of Mr. Brown.

Mike Papantonio:             Let me ask you this. Is there just an issue about training? I mean, look, my, my memory of, my memory of this, when I read the facts, was that the officer was heard on the body cam saying, where’s his gun? Where’s his gun? What’s the take, what’s your take on that? I mean, he obviously believed there was a gun there. What, what’s, what is that about?

David Haynes:                     Yes. And, and there, that appears to be a breakdown in communication between 911 dispatch and the deputy. Full 90 seconds before, Mr. Brown had informed dispatch that he did not have a gun, did not have a weapon. And we believe there was a failure in communication between the dispatcher and the officer. It also may have been that this one dispatch lady was trying to handle communications between Mr. Brown and the officer at the same time, which was simply too much. Also the officer made errors when he arrived on scene. He should’ve read the scene. He should have called for backup. And there are a number of police tactical errors that he made as well.

Mike Papantonio:             It seemed like the officer could have just taken refuge behind his car, his protection, if you thought the man had a gun. But anyway, we’ll see how this develops. David, thank you for joining me. Okay.

Mike Papantonio:             WikiLeaks founder Julian Assange has been holed away in the UK since 2012. He spent seven years under house arrest in, in Ecuador, in the embassy, before literally being dragged to prison. His supporters have campaigned for his release, yet the Biden admin, administration, still wants him extradited to the US. I have host of Redacted Tonight, Lee Camp, just one of the smartest, really the smartest progressive in this business, takes a com, he takes a comedy angle, but his stories are incredible. Lee, look, what, what do you believe is the biggest motivating factor for our government’s continued push to extradite this guy? It just goes on and on, doesn’t it?

Lee Camp:                              Yeah, it really does. I mean, it’s incredibly just disgusting to watch. The courts in the UK have ruled that he can’t be extradited specifically because the US prisons are so horrific that he would be a suicide risk. And so all that needs to happen now is that they need to stop the appeals, Biden, Biden administration, and he would be a free man. Assange would be a free man tomorrow if they did that. But they’re not and actually we did get a slip up from one of our ruling elite, Leon Panetta, the former head of the CIA revealed the real reason. And we kind of knew it, that they are continuing to persecute Assange. He said, we just want this to send a message to others, to not do the same thing. Meaning do not reveal our secrets.

Mike Papantonio:             Well it. Right, that’s the message. Don’t tell the ugly filthy things that the CIA has done, or the FBI has done. Don’t tell us what the NSA is doing to us every single day because that’s bad. So let’s keep the guys locked, let’s, let’s just keep the guy locked up and hopefully the story will be that everybody, journalist or otherwise, is just terrified to actually tell us the truth. What are the main concerns of his supporters, Lee?

Lee Camp:                              Well, obviously his health is a major one. He’s, he’s been unhealthy for years now. Anyone can take a look at a photo of him and know that this is not a healthy man. I mean, before these two years in Belmarsh the harshest prison in the UK, he spent seven years, like you said, in the, in the, basically one room in the Ecuadorian embassy. So he’s really been in close to solitary confinement for nine years now. He is not healthy. People are worried about him, worried about him getting COVID, and, and there’s a million reasons that he should be released. And part of the reason that I mentioned that they did, they’re not extraditing him to the US, is because he is a, a suicide risk. He’s depressed. He is having an incredibly rough life and his supporters want him to, again, be free because this is a hero. This is someone who revealed, as we said, the secrets, the actual operating procedures of our American empire and so many countries around the world, not just America. But secrets that, that were from the Russian government, the Chinese government, Australia, Peru, Britain. So people think he was on some sort of just mission against America, but he was really for a mission of transparency by governments around the world.

Mike Papantonio:             He revealed what Howard Zinn was telling us for decades. And then that the CIA, the NSA and spook industries in other countries have just managed to mangle decency and democracy. Look, I, I think this is interesting. It seems like every American corporation, media corporation, is talking about op, talking about opposition leaders all over the world and poor, poor Navalny. Okay. This is a guy, understand that this Navalny, people don’t understand this, this is a guy Alexei Navalny, he was a guy who made the statement that immigrants coming to his country are, are less than cockroaches. And it doesn’t seem to affect the corporate media about that. He’s the big victim now. What is your take on this thing? I wonder if it’s the same as mine.

Mike Papantonio:             Yeah. I mean, in one hand, you’ve got a guy who is a journalist. You can call him whatever you want. Journalism begins with information. This guy got the information. He had the courage to put it out there. And then every, I mean, every, every president since that’s happened has done nothing to say, you know what, maybe we ought to pay attention to what he said. Maybe we ought to react to what he said rather than, than having this guy rot away in prison. Lee Camp, thanks very much. You can catch, you can get Lee’s hosting RT’s weekly comedy show Redacted Tonight. It is truly a great show. You can see his website @leecamp.com. Let’s, let’s, let’s follow this story a little bit more Lee as we go on. Okay. Thank you for joining me.