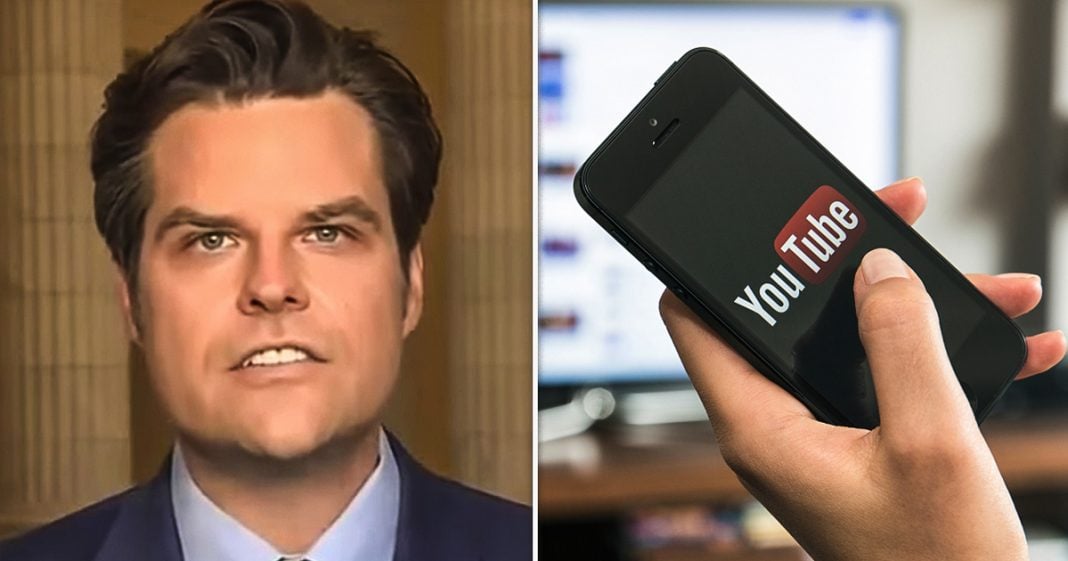 Mike Papantonio:             Republican Congressman Matt Gaetz is spending hundreds of thousands of dollars to convince his supporters, that he’s an innocent man, but all this spending might be a complete waste. Joining me to talk about this is Farron Cousins. Farron, as I look at this, you know, I don’t know who’s less popular this week. The Academy Awards production people or Matt Gaetz, the numbers are dismal on both of them. But this guy, he’s in a free fall right now. He’s trying to spend his way out of it. What, what’s your take?

Farron Cousins:                  It, it’s really interesting what Matt Gaetz is doing right now, because obviously when there’s a scandal you spend, spend, spend, so you can spin it. But Gaetz is in a district where he doesn’t have to spin it, right? This is a deep red district that already, according to polls, they still support him. So why is he spending, you know, $116,000 on direct mail advertising here in district one? It’s because he understands that he has always had many primary opponents, some of them, you know, kind of little wacky, but some of them serious contenders and those people are chomping at the bit to come at Matt Gaetz in next year’s GOP primary using this scandal as a way to finally take him down and overtake that seat.

Mike Papantonio:             Yeah. Okay. So the, one thing I think is interesting is, his TV ads are fight back. You’re the victim, I’m Matt Gaetz and you’re the victim because everybody’s lying to you. And he goes after CNN, which, you know, I get it. CNN, there’s more trash TV on CNN than you can count, but CNN is not really going after him here.

Mike Papantonio:             I don’t get that whole connection. He’s saying fight back. You’re the victim because CNN is lying to you and they always lie to you. MSNBC, he’s targeting them, I think. Roger Stone, he has Roger Stone doing all of this. It’s the weirdest, it’s the weirdest scenario.

Farron Cousins:                  Right. And you go to Roger Stone when you’re desperate, right? We, we’ve seen that in the past. That is what Roger Stone does best. But again, I think he’s using the CNN bit as a scapegoat, because like you said, CNN is not going after him too hard. But if he draws people’s attention to say the Daily Beast, that’s breaking a lot of these stories, that has all those Venmo receipts, suddenly his supporters might say, well, well, what is the daily beast? Let me go look at, oh my God, this looks even worse. So he is trying to misdirect people like, go be mad at CNN, and I’m the victim and I’m with you. And they’re going to come after you next, is one thing he said too.

Mike Papantonio:             And the whole CNN thing has been set up fake news, you know, and they’ve had to make so many apologies about their reporting. So he’s, he’s trying to capitalize on that. Interesting, his legal fees, he’s $85,000 in legal fees at this point. And it’s just started because I mean, what he’s looking at is sex trafficking. And if it goes bad, we’re talking about a lot of time in the clink, right?

Farron Cousins:                  Yeah. Absolutely. And that’s the whole point of, you know, all of this may be for nothing. He may be spending all this money on advertising when, depending on the outcome of this, he may not even be able to run for office this time next year. So this is going to be really fun to see how it plays out.

Mike Papantonio:             And interesting thing, he’s got, he’s having these fundraisers and the folks in DC, his people that he doesn’t get along with, he says, I don’t really have any friends in DC. It’s pretty obvious.

Mike Papantonio:             They’re not sending him any money because he can use his, he can use his campaign contributions for his legal fees. Most people don’t understand that.

Mike Papantonio:             In a recent interview, YouTube’s CEO admitted that their algorithms are pushing corporate news instead of independent media. No surprise here. Okay. Now this is, this is called YouTube. Okay. It’s not called corporate media tube, but it’s become corporate media tube. Let me show you how it is. I know you’ve looked at this. When we do a segment here, all, every segment behind us is MSNBC, CNN, MSNBC, CNN. Why? Because they’re paying YouTube so darn much money, it’s generating advertising revenue for them, and they’re paying money. They’re advertising and they’re saying, look, if you’ll put us up there and promote us and push us, we’ll spend more money. This is a really ugly story because they’ve made, you know, the test right now is YouTube is simply broadcast TV.

Farron Cousins:                  It really is, especially with their, you know, new, new streaming service and, and the premium memberships. But, you know, Susan Wojcicki, the, the CEO.

Farron Cousins:                  Of, of, of YouTube actually admitted this. I mean, that’s the part people have to understand. She did literally admit during a recent conference, you know, yes, we’re pushing corporate media sources because she says, you know, they’re more reliable. We don’t want to push some yahoo down there who’s doing videos from his basement.

Farron Cousins:                  Yeah. And it’s really disappointing because you have people who doing these channels on YouTube, these news channels, where they actually do by the way, go out and do real reporting. They’re on the ground. They’re talking to people. They’re doing the FOIA requests and doing videos on the results of that. These are actual journalists and they’re getting punished because they don’t have the money that corporate media has. And corporate media has now just taken over YouTube. And they’re letting them.

Mike Papantonio:             You know what I thought of when they said that they’re just not getting legitimate news stories, we have to go to corporate media to do that. I couldn’t get, I couldn’t get out of my head the, the, the, the Cuomo story. Chris Cuomo, where they do a set, it it’s all staged. Chris Cuomo is coming out of his cellar now after fighting COVID. The rest of the story is, he had come out of a cellar a week and a half before. And it was just staged, exactly what CNN wanted to do. But they’re saying, oh, look, the reason other stuff isn’t credible is because they’re shooting it down in their basement. And they’re just not credible reporters. I, I, this, this woman is just so far out of reality with this.

Mike Papantonio:             And I think it’s going to start hurting. There’s, there’s going to be some serious competition. I got a bit of, I got about a minute. Tell me, don’t you see that happening? Somebody is going to move into the space.

Farron Cousins:                  Right. Absolutely. We’re already seeing, you know, some content creators moving over to Twitch, which is, you know, an equally popular platform at this point. And there’s lots of talk of people saying, why don’t we start our own? And I always kind of laugh at that because I say, listen, I’ve been a part of multiple groups. And we have tried that, but y’all weren’t there to support it. But there is people, there are groups that are, that are saying, we’ve got to move. We have to do something. But, but independent media is dying in the meantime.

Mike Papantonio:             I think Twitch is a, is a threat. When people start understanding that this woman, the CEO for, you know, for YouTube is shoving this down everybody’s throat. You, you’ve cut your cable. Okay. You’ve cut your cable, but we’re still not going to let you get away. Because we’re going to have that same cable stuff on, on YouTube. It’s it’s, it’s really kind of a train wreck, possibility. Farron Cousins, thank you for joining me.