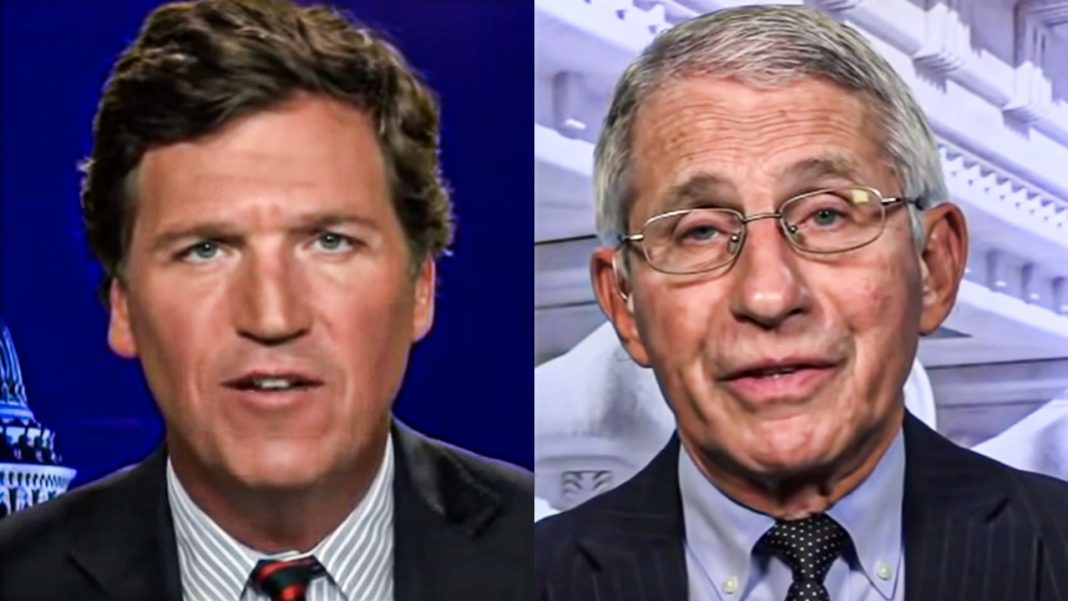 Tucker Carlson has decided to take out his rage on Dr. Anthony Fauci this week, and he has now used his television show to call for a criminal investigation into Fauci. Carlson went as far as to say that Fauci was responsible for the pandemic. Carlson is absolutely unhinged, and his brain rot has been allowed to flourish due to the fact that it made Fox News a lot of money. But now the crazy alter ego has become the dominant one, and Carlson is losing himself to it more and more. Ring of Fire’s Farron Cousins discusses this.

Tucker Carlson with each passing day is, is becoming a little crazier every single day, this week, after doing a ridiculous tirades about masks and how it reduces oxygen flow to your brain, um, which may be a, and maybe that explains a lot about Tucker Carlson, but either way after he did this little tirade, he started talking about the fact that he wants to see Dr. Anthony Fowchee criminally executed for being responsible for the pandemic, just for the pathetic pandemic response from the Trump administration when Fowchee was involved with that. No, no, no, no, no. Tucker Carlson went so far as to imply that Anthony Fowchee is actually responsible for the pandemic itself. And it’s based on some pretty questionable reporting that says that all the way back. And I think it was like 2014. Um, the United States gave money to this health Institute overseas, that Institute then contracted a lab in Wu Han to do some research on viruses and bats. Um, and of course, Dr. Fowchee was a part of that administration that would have been the Obama administration.

And, uh, by extension Tucker says, obviously, you know, the Wu Han lab created the virus and then released it, but they did it because foul cheese group gave them money seven years ago or six years ago, I guess with the time the pandemic hit it, it’s insane. Like all of this is pure conspiracy theory that has no basis in reality, but Tucker Carlson is out there every night, stating it as if it’s a concrete fact. And now going as far as saying, I’ve made up this thing in my head and based on this made up thing, I now want Fowchee, criminally prosecuted. I was thinking about Tucker Carlson earlier today, you know, researching this story and all that. And I think I’ve come up with, with an explanation as to what’s happening here. Tucker Carlson is basically Dr. Jekyll and Mr. Hyde. And I say that because there was a time really not all that long ago, the Tucker Carlson was actually seen as a moderate Republican, had his little show on MSNBC. I know Mike Papantonio went on it all the time. And Tucker Carlson would listen to the progressive talking points that pap was was, was stating on the air. And he would agree with some of them and he would build upon some of them.

He was actually reasonable. But then when he went to Fox, this other personality, the Mr. Hyde personality came out, it started off small, but in the last few years, Hyde has grown more and more evil, getting more and more extreme. And you don’t see old Dr. Jekyll original MSNBC Tucker Carlson anymore. Do you? Because that Hyde personality has taken over and Tucker Carlson no longer has any control over it. You know, it’s like his, his mind is at war with itself. And the Mr. Hyde personality is the one that has taken over. This is now who he is. This is now what he believes. And it is now what he stands for. And Fox news won’t do a dang thing about it because even with his advertising, Exodus, Tucker Carlson still makes them tons of cash. They are rolling in the dough from local carriers who run Fox news. You know, the Fox news network. They paid to have that none. And that’s the money that compensates for Tucker Carlson, not being able to get quality advertisers, but Tucker Carlson has gone off the deep end.