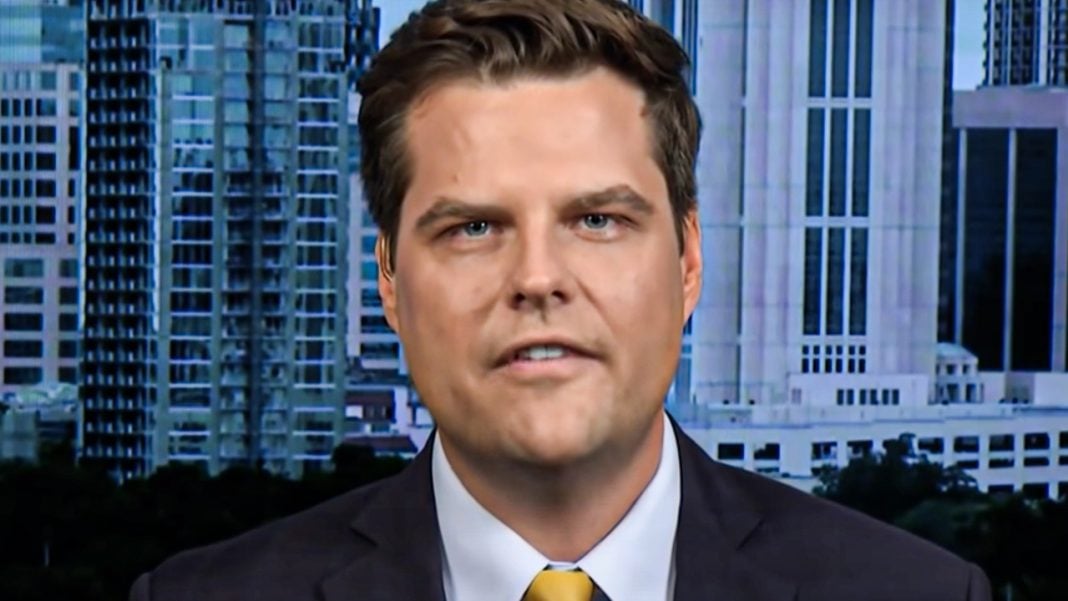 A new set of revelations have emerged in the Matt Gaetz saga, and all of it is very bad for the Florida congressman. The Daily Beast spoke to a dozen women that Joel Greenberg set up for sexual encounters, and they admitted that they were plied with drugs and money during this time. The women also confirmed that they were paid via Venmo, the very same app that Gaetz was using to send money to Greenberg. Ring of Fire’s Farron Cousins explains what’s happening.

Republican Congressman Matt Gaetz is already having a really bad week and it’s only Wednesday morning. Uh, so far there’s been two major developments stories really that broke, uh, that really paint a bad picture for Matt Gaetz and his future in the Republican party. The first one was the fact that, uh, federal authorities are trying to get Joel Greenberg, the indicted South Florida, uh, former, uh, politician facing 33 counts. Feds are trying to get him to flip. They’re also trying to get, uh, one of Matt Gaetz, his ex-girlfriends who also happens to be a former staffer, uh, with Congress trying to get her to flip. She’s the one who had expressed concerns earlier via text message, a text message, excuse me, uh, where she was confiding with her family and friends that she could be charged with obstruction of justice. So if she is afraid of that happening, they might be able to get her to flip and say, listen, we can make obstruction goes away. You just got to tell us what we need to know. So that was the first, really, really bad thing for Matt Gaetz.

And let’s not forget by the way, Saturday is the deadline. Saturday. This coming Saturday is the deadline for Greenberg, at least to decide whether or not he’s going to cooperate and flip on Matt Gaetz. Second story came out late last night from the daily beast where they talked to a dozen women who, uh, Joel Greenberg had basically, I guess you’d say employed, um, to have sex with Greenberg and potentially other individuals. Although the women, uh, were only talking about Greenberg, none of them, by the way, implicated Matt Gaetz, But The women who were alleged to have had relationships with Matt Gaetz refuse to talk to the daily beast. So that’s quite important. Now here’s the thing. This new story From the daily beast puts more pressure on Greenburg. Tying back to that first piece of a bad news for Gates this week, Greenberg may or may not flip the more bad news that comes out about Greenberg, the worse it is for Matt Gaetz, because it makes it more likely for Greenberg to want to cooperate with the feds.

Not to mention during this story, it was confirmed the daily beast story, uh, that these women admitted they were applied with drugs and cash in exchange for sexual favors. Now, most of the women say that, yes, this, this was consensual. They agreed to it. Um, a few of them did describe the experiences as traumatic. Uh, two of them, I believe have said, you know, they’re seeking therapy to try to overcome what happened. So, so there was a little bit of coercion, uh, but none of them at this point are, are accusing anyone of assault. So that’s also important. So according to the women, the daily be too, there’s no assault involved. It was consensual, albeit traumatic for some of the individuals. They also confirmed that they were paid via Venmo, the same cash app that Matt Gates was using to pay Joel Greenberg, especially when he sent the message hit up blank. And the blank was a nickname for the girl who turns out to have been 17, not 18. So yes, all of this does tie back to Matt Gates. All of this is very bad for him, especially with that deadline coming up in just three days for Greenberg Greenberg’s gun to flip guy really has no choice because he has nothing to gain from keeping silent.