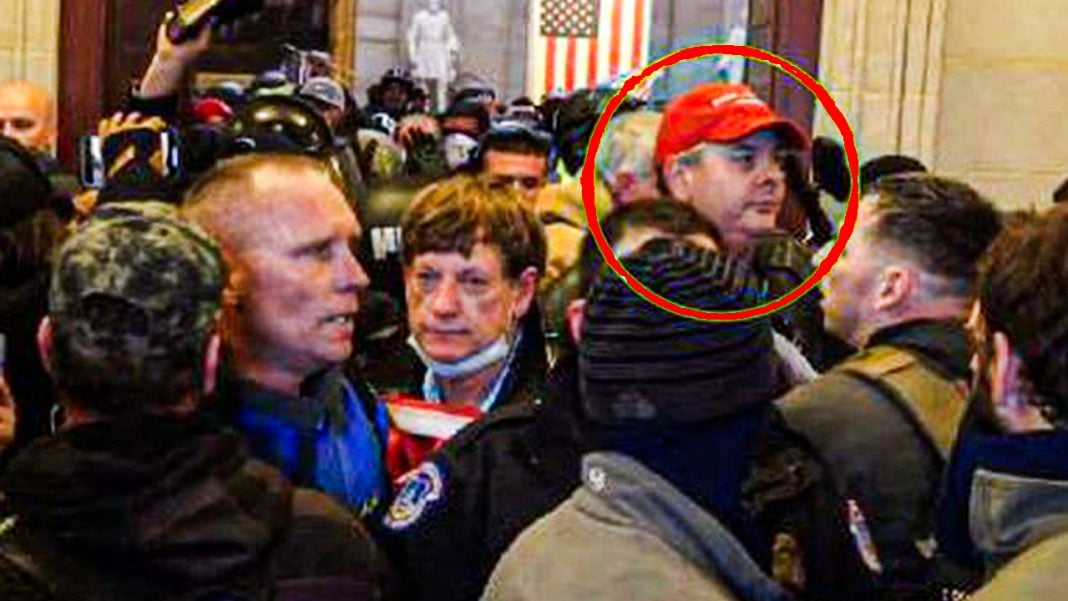 A Florida man was arrested after he bragged on Facebook – and posted pictures and videos – about attending the January 6th riot at the Capitol. This man is now one of many who got busted because of their own arrogance and stupidity, and now he is at risk of spending the next few years of his life behind bars. But if you have the common sense of a squirrel on acid, maybe you’d better just steer clear of committing any crimes. Ring of Fire’s Farron Cousins discusses this.

A Florida man is currently behind bars, awaiting trial for his involvement in the January 6th Capitol in Syria erection. And he is behind bars because the man was dumb enough to who brag about being at that insurrection and post pictures and videos of himself at the insurrection on Facebook. Here’s what happened a couple of days after the riots took place at the Capitol, a Florida man, by the name of John Nassif was in a Facebook argument with somebody who said, Oh, they’re pushing down the cops to get in the door. So Nassif responds. He’s like, you know, I was there right. And starts to talk about how the cops let us in. They post video of it basically bragging like, Nope, you’re so wrong.

Look, I’ve got the video evidence. And so of course the department of justice got their hands on this and said, huh, I guess we need to go arrest Mr. Nassif for being a part of this. Yes. And they did. Now, Mr. NASA is not the first Republican or Trump supporter. I should say really, uh, who got arrested because they posted stupid stuff on social media about attending the Capitol riot. And honestly, he’s probably not going to be the last either. This is what happens when very stupid people commit crimes, they leave evidence. But in this case, it’s not even about leaving evidence. It’s about like bragging about the evidence, like, ah, ha look what I have. I am here. It’s like, if you were robbing a bank afterwards, you posted the video on Facebook and say, Hey, I made money. The easy way.

What’s wrong with the rest of you, then you get arrested. And you’re like, but why I was giving out financial tips, people know you broke the law and now you’re in jail for it. Now, Mr. NASA did have a zoom hearing, uh, this week. I am so sorry. It’s not funny because these people really did something horrible. That’s going to be talked about in history books for decades the cup, but he had a zoom hearing. And, uh, he’s terrified about the fact that one, he couldn’t afford legal representation. So we had to get a public defender, but two he’s he’s afraid because that public defenders from DC, because that’s the jurisdiction where all this happened. That’s what happens, dude.

Um, and he doesn’t think he can get a fair shake with a public defender from DC because is obviously if you’re from DC, you’re probably part of the swamp, right? But nevertheless, the judge did try to reassure him like, listen, this guy has already done a lot of these cases. So he he’s pretty well versed in it. He knows what he’s doing. He has an obligation to represent you to the best of his ability. Uh, so there you go, Mr. NASA, hope that puts your fears at ease, but you’re a 55 year old man. You could be spending some of the few best years of your life. Now behind, you know, you’re getting up there in age. You really don’t have a lot of good years left before you start experiencing health problems. Before your age catches up with you, you just can’t physically do what you used to do when you’re going to spend those years in jail. One, because you were stupid enough to brag about this stuff on social media, but two, because you followed the false prophet of Donald Trump did his bidding and then he didn’t show up to protect you. It’s a shame really, but you get what you deserve when you screw around like this and you leave evidence everywhere. You’re gonna have to pay the price.